After Arrests, Germany Confronts Issue Of Far-Right Extremism In Its Military 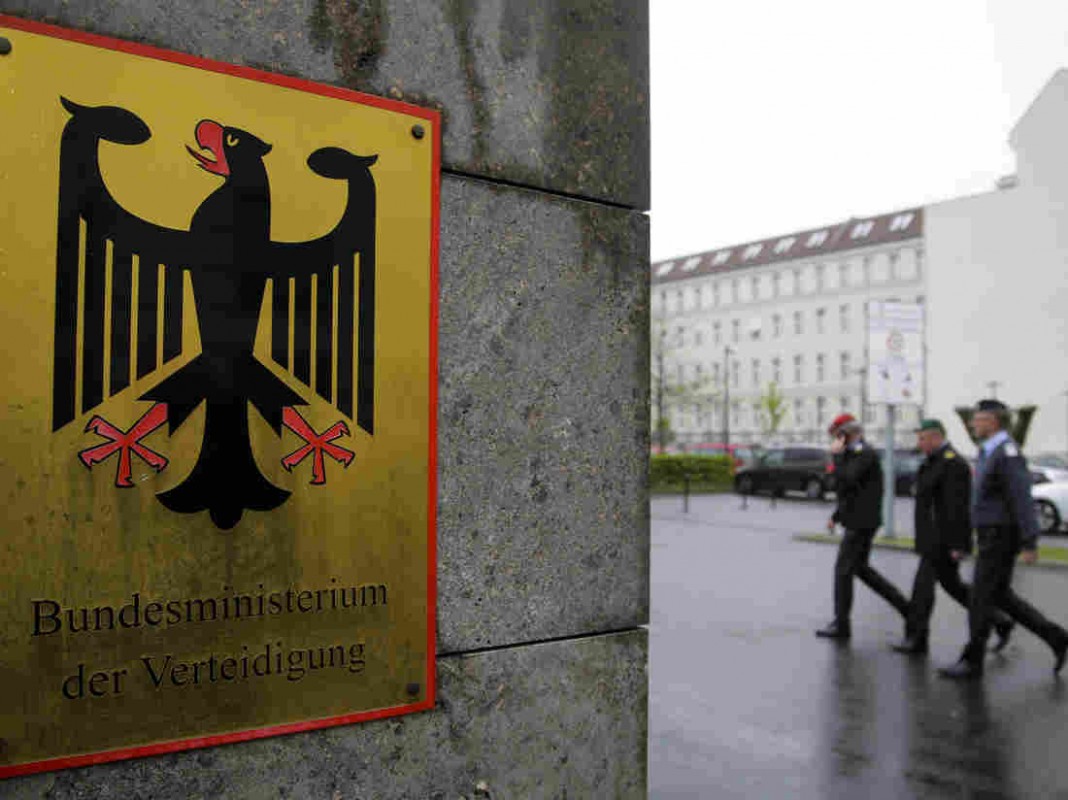 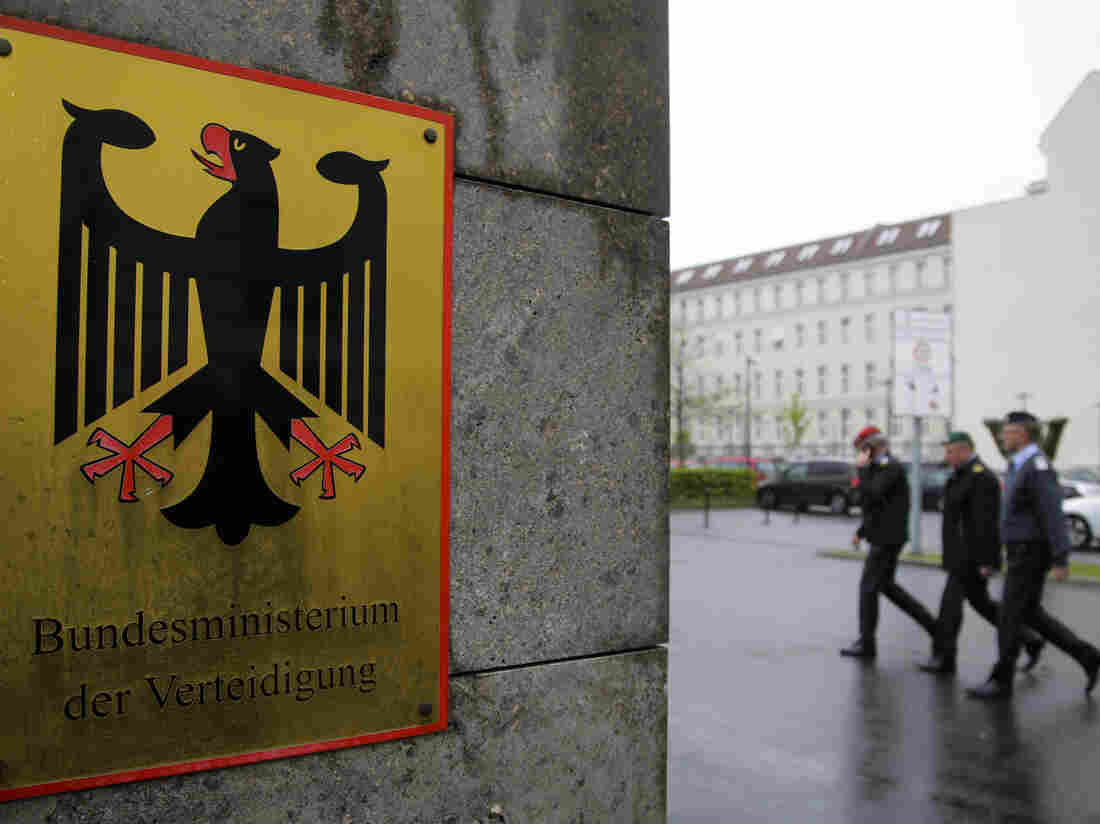 German forces Bundeswehr officers enter the German Defense Ministry prior to a meeting between Defense Minister Ursula von der Leyen and about 100 top officers in Berlin last month. The meeting was about the arrest of an army officer on suspicion that he was part of a small group planning a far-right attack. Markus Schreiber/AP hide caption

German forces Bundeswehr officers enter the German Defense Ministry prior to a meeting between Defense Minister Ursula von der Leyen and about 100 top officers in Berlin last month. The meeting was about the arrest of an army officer on suspicion that he was part of a small group planning a far-right attack.

Are there Nazis in today’s German military?

It’s a question that’s been plaguing Chancellor Angela Merkel’s government since the arrests in late April of two German army officers accused of an elaborate plot to assassinate the German justice minister and former German president, as well as planned attacks on refugees.

German Defense Minister Ursula von der Leyen is overseeing the probe to locate other far-right extremists within the ranks. She’s been especially upset with her generals after learning that the suspects’ superiors failed to act, even though they knew the two men harbored far-right views.

One of the accused officers even did a master’s thesis that was flagged for its far-right content. He was nevertheless assigned to an elite Franco-German battalion in Illkirch-Graffenstaden, France.

Starting next month, Germany’s military intelligence will conduct intensive background checks on all recruits to prevent more neo-Nazis from joining the armed forces. The checks — which required a change to German law — were originally aimed at uncovering Islamist extremists who might try to infiltrate the German military.

Military investigators are also reviewing 280 complaints of soldiers carrying out “far-right actions” within the armed forces, including giving Hitler salutes, spreading neo-Nazi propaganda or posting far-right comments on social media. In one case, a soldier posted in a Whatsapp group chat: “Missing since 1945 – Adolf Hitler please check in; Germany needs you!”

The arrests and worries about a far-right infiltration of the 178,000-strong German military come as a surprise to Florian Kling, an army captain and spokesman for a military watchdog group called Darmstaedter Signal. He said during his 11 years in the German military, he’s never experienced far-right ideology as being endemic.

“All of the superiors I had were very critical of far-right activities,” King said. “I personally experienced several soldiers who claimed to be Nazis and were telling Nazi jokes and Nazi mottoes …[and] were caught and they were kicked out of the army.”

One veteran who was expelled for his far-right ideology is Christian Weissgerber, 27, of Berlin. The former neo-Nazi, now about to start a Ph.D. studying new media and politicization, served two months in the German army in 2008 before being dishonorably discharged .

Unlike King, Weissgerber said he believes there are far more German soldiers currently on active duty who harbor far-right views than the two arrested or 280 with complaints. He said that certainly was the case while he was in uniform.

Weissgerber recalled an encounter with a superior who was conducting an inspection of his room and came across a hand towel Weissgerber had with the black, red and white colors of the Nazi flag.

“He saw the hand towel and then said: ‘Okay, no problem at all. When the next [inspection] officer comes in, you can just hang it over your cupboard and he will be delighted to see that,'” Weissgerber said. “So I did and he was delighted, which came in handy because I got good treatment by this particular kind of officer.”

Since the arrests in April of the far-right terrorism suspects, military inspectors have combed through all 1,500 German barracks and posts to locate and confiscate such memorabilia. The defense minister has also ordered changes to how the German military or Bundeswehr conducts itself with regard to Nazi history.

“The Bundeswehr has to send signals both internally and externally that it is not rooted in the tradition of the Wehrmacht,” the Third Reich armed forces, von der Leyen told the Berlin-based newspaper Bild am Sonntag last month. “It needs to confidently put more of an emphasis on its own 60-year history.”

The defense minister is also demanding the renaming of German military installations named for Nazi-era icons. There are at least five such posts across the country, including the Lent Kaserne or barracks on the edge of the North Rhine-Westphalia town of Rotenburg. Helmut Lent was a World War II night-fighter ace admired by Hitler confidant Hermann Goering.

Marc Andressen, a spokesperson for the Green Party in Rotenburg who has repeatedly tried but failed to get the name changed, says he’s happy the defense ministry has finally come around. Currently, he said, “we have a tendency toward right-wing parties in Europe. We need new rules, moral values, ideals and idols [that] exclude the Nazi era and its heroes.”

But most of the 1,000-plus soldiers at the barracks, as well a majority of the Rotenburg town council, object and have asked to keep the name as is. Mayor Andreas Weber says a review by the Center for Military History in Potsdam shows Helmut Lent was not a member of the Nazi party and in fact had family members who were pursued by the Gestapo for their involvement in an evangelical opposition movement to the Nazi regime.

“His wife was also half-Jewish and he had reason to fear under the racial laws back then that he could persecuted,” Weber said. “You can’t rule out that he was simply a victim of Nazi propaganda.”

Weber says he’d like to see a plaque erected at the barracks to explain the history behind the Lent name. But he doesn’t think majority opinion will prevail, given the pressure von der Leyen is facing.

The sensitivities are simply too great. Florian Kling, the army captain, summed it up this way: “Obviously, as German soldiers who are now fighting abroad and also protecting our democracy, we have to very carefully make sure that no one ever gets seen as being too close … to the Third Reich again.”