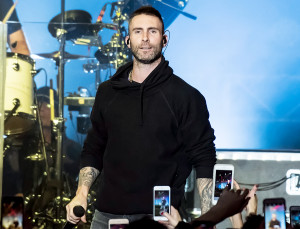 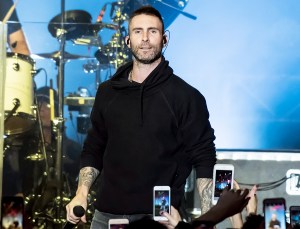 Adam Levine of Maroon 5 performs during Philly Fights Cancer: Round 4 at The Philadelphia Navy Yard on November 10, 2018 in Philadelphia, Pennsylvania.Gilbert Carrasquillo/Getty Images

“I’m still formulating a lot of things,” Levine, 39, told Variety for its 2018 Hitmaker of the Year cover story published on Tuesday, November 27, when asked about their decision to accept the gig.

Though the Maroon 5 frontman didn’t give much away, many celebrities and fans have urged Levine and the band to pull out of the high-profile event in support of former NFL player Colin Kaepernick and other athletes who have risked their careers by taking a knee for equality during the National Anthem.

Us Weekly exclusively confirmed in September that the Grammy-winning group had “pretty much accepted” an offer to perform at the sporting event. Multiple sources later told Us that rapper Cardi B is “being considered” as the special guest during the game that’s set to take place at Atlanta’s Mercedes-Benz Stadium in February.

Since the announcement, a petition on Change.org has garnered more than 63,000 signatures asking Maroon 5 to drop out of the performance.

Stars at the Super Bowl Through the Years

Levine has yet to publicly confirm the group’s participation or address the controversy, but spoke to Ellen DeGeneres earlier this month about the show.

“It’s definitely a rumor. And the rumor’s a rumor that everyone seems to be discussing. It’s the Super Bowl. It’s a great event and there’s gonna be a band performing — or an artist of some kind — at halftime. And it’s gonna be great, regardless of who it is,” the Voice judge told DeGeneres. “Whoever is lucky enough to get that gig is probably gonna crush it. … Whoever does it is probably equal parts nervous and excited. This is all speculative ‘cause I don’t know who I’m talking about.”

Us exclusively reported in October that Rihanna declined the Super Bowl performance because she “supports Colin Kaepernick.”

In 2016, Kapernick, 31, was the first NFL player to participate in the peaceful protest against police brutality and racial inequality by taking a knee, and has not played in a professional football game since that season. The former San Francisco 49ers quarterback has since filed a grievance against the league and its owners, alleging they colluded to keep him from playing.