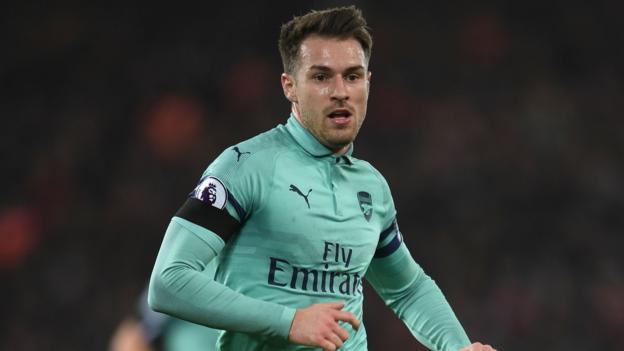 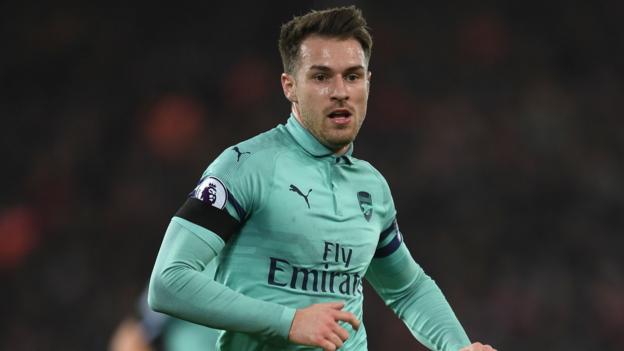 Arsenal midfielder Aaron Ramsey will hold talks with five of Europe’s leading clubs in January before leaving the Gunners when his contract expires next summer.

The 28-year-old is able to negotiate and sign a pre-contract agreement with foreign sides from 1 January, prior to exiting the Emirates Stadium as a free agent when his current deal finishes on 30 June.

Contrary to some reports, he has not yet made a decision.

The Wales international was in discussions with Arsenal over a new four-year contract, but the offer was withdrawn in September, mainly for football and financial reasons.

Ramsey might have been open to departing in January, however Arsenal feel his relative value to the squad for the rest of the season is greater than what they could recoup through a transfer fee and salary savings.

Potential suitors are now unwilling to pay the sort of money that would tempt the Gunners to part with their longest-serving player mid-campaign, thought to be around £40m.

With no major departures expected in January and heavy investment in new signings and contracts over the past year, Arsenal do not have significant funds to spend in the upcoming transfer window.

Any permanent acquisitions, loan fees and salaries will be drawn from a modest budget and therefore loan deals are more probable, with out-of-favour Barcelona midfielder Denis Suarez, 24, among those under consideration. That budget is likely to increase substantially in the summer.

There have been conversations about recalling defender Calum Chambers and winger Reiss Nelson from loan spells at Fulham and Hoffenheim respectively, but with Chambers the chances are remote because breaking his season-long deal would incur a fee, while there is reluctance to disrupt Nelson’s progress in Germany.

There is no indication Arsenal owner Stan Kroenke will inject any of his personal wealth, which tallies with the club’s managing director Vinai Venkatesham reaffirming their commitment to a “self-sustaining business model” during an interview with the BBC in October.

Furthermore, the club are said to be realistic about their current capabilities relative to those of rival teams. This partly explains their commitment to young players and confidence in the talent coming through.

Although Saturday’s 5-1 defeat at Liverpool saw head coach Unai Emery and the club hierarchy criticised in some quarters, there is an internal belief that they are moving in the right direction after a tumultuous period which saw Arsene Wenger leave as manager after 22 years in charge and numerous staff and structural changes behind the scenes.

There could be more to come, with the appointment of a technical director possible, while Emery will be given time to implement his vision and mould a squad over the course of several transfer windows, in a similar way to how Liverpool have developed since Jurgen Klopp arrived in October 2015.