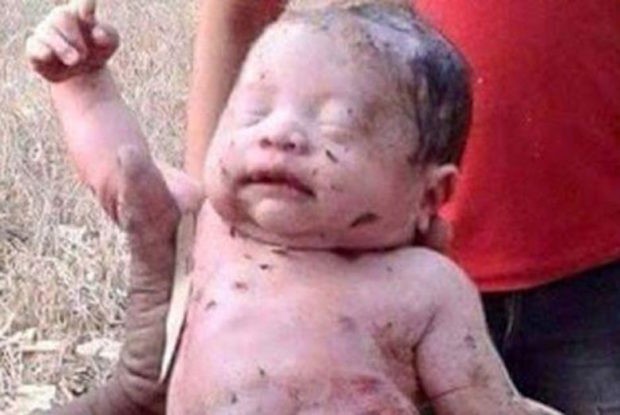 In a disturbing story that comes from Thailand, a baby was found buried alive after being brutally stabbed just days after his birth. But today, he’s finally getting a family.

In February of this year, seven-month-old Aidin was dumped face-down in a 20cm shallow grave in Khon Kaen province, Thailand. However, cattle herder Kachit Krongyut, was lucky enough to pass by at just the right moment. She saw a foot peeking out of the dirt beneath a eucalyptus tree. When she heard a squeal too, she began to dig.

Krongyut’s quick actions saved the child’s life, who was immediately rushed to the hospital. Incredibly, the child was still alive. In fact, in an ironic twist of fate, being buried alive may have actually kept the child alive longer because the pressure helped keep the wounds from bleeding too much.

Now, the miracle baby is set to be adopted by a Swedish couple. Supachai Pathimchart from the Kaen Thong Orphanage where Aidin was cared for said they were “very happy” for him.

He said, “all of the safety checks have been carried out to make sure Aidin goes to a good home. We’re very happy that he will be going to a good home and have a comfortable life. He survived a very bad experience but he has a lot of character and he’s happy with life.”

Doctors believe Aidin may have been abused by the mother, a 42-year-old woman whose name has not been reported. She was tracked down by footprints and motorbike tracks at the scene and has now been charged with attempted murder and abandoning her own child.

What do you make of this disturbing story and the mother who could do such a thing to her child? Tell us in the comments and please SHARE with friends and family.