‘A million miles per hour’: Inside Trump’s campaign when Trump Jr. met with Russian lawyer 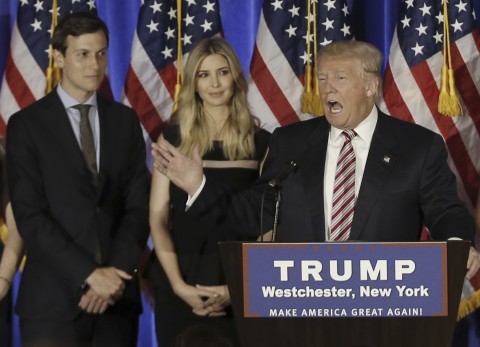 It was June 7, 2016, and Donald Trump stood on the stage at his Westchester County, N.Y., golf club to launch his general-election race against Hillary Clinton with a big promise.

“I am going to give a major speech,” Trump declared, before his gaze drifted away from the prepared remarks on the teleprompter at the close of an unusually subdued primary-night speech. “Probably Monday of next week. And we’re going to be discussing all of the things that have taken place with the Clintons.

“I think you’re going to find it very informative and very, very interesting,” he added.

Hours earlier, his son Donald Jr. hit send on an email confirming a meeting with a lawyer with alleged ties to the Russian government with the promise of damaging information about Hillary Clinton.

The meeting occurred two days later on June 9 in Trump Tower, attended by Trump’s chief campaign strategist, Paul Manafort, and Trump’s son-in-law, Jared Kushner. But it was a disappointment, according to Trump Jr., who said this week that the Russians didn’t have what they promised.

And the major speech about the Clintons that Trump promised never materialized.

The two events, just hours apart, are now part of a ballooning controversy over the Russians’ efforts to intervene in the 2016 election and investigations by an FBI special counsel and Congress into whether Trump campaign associates might have colluded with them. They also highlight the freewheeling nature of the Trump campaign, which at that moment found itself unprepared and underfinanced to face Clinton’s machine-like campaign in the general election.

In an interview with Reuters on Wednesday, Trump denied that he knew about his son’s meeting with the Russian lawyer until recent days, but he defended Trump Jr.’s decision to hold it.

“No, that I didn’t know until a couple of days ago when I heard about this,” Trump said. “I think many people would have held that meeting.”

[Is Donald Trump Jr.’s ‘I love it’ email a smoking gun or a distraction?]

In early June of last year, Trump and his children were itching for a fight with Clinton but had little in the way of experienced political hands with clout to navigate the complexities of a presidential general-election contest. Some Trump associates say Trump Jr. was responding to a real need within the campaign to catch up with Clinton — and fast.

“You always take those meetings because you never know when someone will come in with something that’s a game changer, especially with this campaign that didn’t have a research operation,” said one former Trump campaign adviser still in touch with the White House who, like several others interviewed for this report, spoke on the condition of anonymity to talk candidly. “They were so desperate for research that they would meet with anyone.”

The day of Trump Jr.’s meeting with Natalia Veselnitskaya, the Russian lawyer with alleged ties to the Kremlin, was a busy one on the campaign trail. Republican National Committee Chairman Reince Priebus had arrived in New York to join Manafort at a meeting of major GOP donors at Trump Tower aimed at jump-starting the campaign’s general-election fundraising efforts as they pushed to catch up with Clinton.

At the same time, Trump faced the prospect of an open revolt at the Republican National Convention and a fierce fight for delegates at state conventions. Meanwhile, his public poll numbers were in a free fall, taking him from a virtual tie with Clinton to a six-point deficit, according to the Real Clear Politics average of national polls. Before the end of the month, Trump fired campaign manager Corey Lewandowski — and elevated Manafort — as his two eldest children, Trump Jr. and Ivanka Trump, flexed their power.

The Clinton campaign, on the other hand, was flush with cash and preparing to tout the endorsement of President Barack Obama. They had finally secured the Democratic nomination and felt confident that they had settled on a strong argument against Trump.

Former Trump aides paint a picture of a campaign that — much like the Trump White House now — was consumed by shifting power dynamics. Manafort’s feud with Lewandowski had deteriorated into an “ugly” war, according to one former Trump adviser, and Trump Jr. had taken Manafort’s side.

So when the candidate’s son — who had no previous political experience — accepted the meeting at the behest of a wealthy friend and business partner, he was able to recruit serious campaign firepower to attend.

According to Veselnitskaya, Kushner and Manafort seemed distracted. Kushner, she claimed in an interview with NBC News, left the room after 10 minutes while Manafort passed the time by looking at his phone.

Yet, if either man had reservations about the meeting, they did nothing to keep it from occurring.

“Paul Manafort should have stopped this,” said one former Trump campaign official, but he didn’t want to anger Trump Jr. because “he was about to ascend.”

Trump Jr. explains away the meeting as a fruitless, but standard attempt by the campaign to gather damaging information on a political opponent.

“Honestly, my takeaway when all of this was going on, is that someone has information on our opponent,” he told Fox News this week. “Things are going a million miles per hour.

“You know what it’s like to be on a campaign,” he added.

But according to multiple former campaign officials and observers, Trump’s children knew very little about how campaigns were supposed to respond to offers from foreign, adversarial governments.

“I worked on a campaign in 2007 and 2008, and I was the Russia adviser to President Obama and we vetted these kinds of meetings very closely, precisely to avoid even the appearance of something like this,” said Michael McFaul, a former U.S. ambassador to Russia. “That was my experience, that was my job. I’m not sure who did this for the Trump campaign, but that was my job.”

On the campaign trail that week and on social media, Trump had begun ramping up his attacks on Clinton, drawing attention to her “missing” emails and promising to unspool a web of corruption during her time as secretary of state.

To former Clinton aides, Trump’s promise of damaging information at the June 7 news conference takes on new meaning in light of the revelations about Trump Jr.’s meeting with Veselnitskaya.

“This one is pretty intriguing,” Fallon said. “It’s just like him to go off half-cocked and make an announcement in anticipation that he’s going to have some info that he doesn’t have yet.”

Like Trump, the general election officially began for Clinton that day. But her fight with Trump really started days earlier in San Diego in a June 2 speech that her aides viewed as a turning point in the race.

In it, she gave her most full-throated criticism of Trump to date in an acerbic, mocking address on foreign policy.

“This is not someone who should ever have the nuclear codes,” Clinton declared. “Because it’s not hard to imagine Donald Trump leading us into a war just because somebody got under his very thin skin.”

“He says he doesn’t have to listen to our generals and admirals, our ambassadors and other high officials, because he has ‘a very good brain,’ ” she continued, eliciting from the crowd the very sort of reaction that would irk her opponent: a cackle of laughter.

It is not clear what information Trump may have been referring to at his news conference, but Clinton campaign aides who had been girding for another Trump curveball saw the moment come and go. Trump’s aides saw it as a sign of his urge to engage with Clinton.

“My sense is that it’s what he wanted to have happen and for whatever reason it didn’t,” said Ed Brookover, a former campaign adviser to Trump and former campaign manager to Ben Carson’s presidential bid. “What it showed was that he was ready to start taking on Hillary. He’d been itching to get at her.”

But his skeletal campaign wasn’t ready.

“Every time some Washington political person, Reince or somebody else, told them that what just happened was lethal and it wasn’t, all they learned was not to listen to the Washington people — they didn’t need them,” said the former aide. “So they started doing things more on their own.”

“My guess is that Don Jr. had never seen an opposition research book,” the former aide added. “He wouldn’t know one if it hit him in the head.”

Ashley Parker and Philip Rucker contributed to this report.