A genetic disease killed Ayla’s sisters. A first-of-its-kind treatment is helping her survive 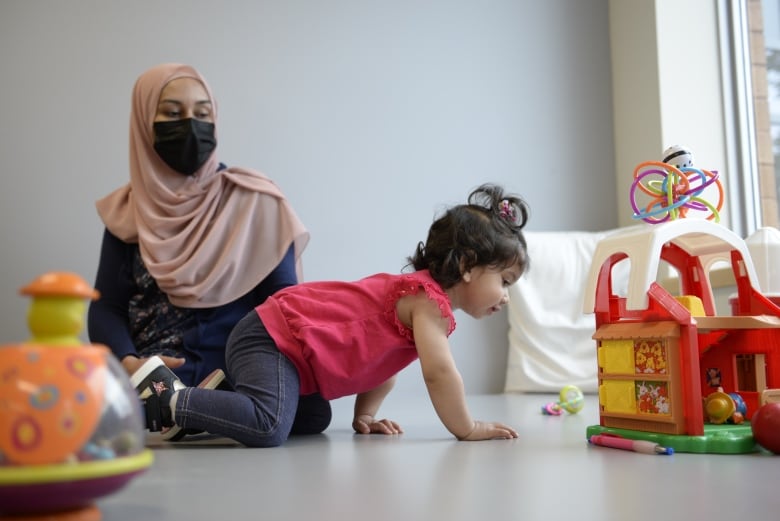 Ayla Bashir acts like the average 17-month-old would. She’s making sounds, moving her limbs around, and grabbing at objects nearby.

These are milestones her parents, Sobia Qureshi and Zahid Bashir, weren’t sure she’d reach when she was diagnosed with Pompe disease — the same genetic condition that had killed two of her sisters.

“When she started crawling or walking or saying her first few words, etc., you look at it and you’re like, OK, she’s truly a miracle,” Zahid told The Current’s Matt Galloway.

The Ottawa-born infant is a unique case in the world of treatment for Pompe disease, a rare and often fatal disease that disables the heart and skeletal muscles.

While most babies with the disease are treated in the months after their birth, Ayla was the first child in the world to be treated in-utero, according to Children’s Hospital of Eastern Ontario (CHEO) in Ottawa.

The protocol was developed at the University of California San Francisco, and involved six prenatal enzyme replacement treatments at the Ottawa Hospital while Ayla was in the womb.

“We were very fortunate that we were able to start treatment in utero when I was 24 weeks pregnant,” Qureshi told Galloway. “Because of that, she has not had any symptoms of Pompe so far.”

Dr. Pranesh Chakraborty, the family’s long-time doctor, helped bring the treatment to Ottawa from UCSF, where it was supposed to be done initially.

He co-led a case study about Ayla and her treatment, which was published in the New England Journal of Medicine on Wednesday.

“I always feel a big sense of responsibility whenever we’re caring for families like Ayla’s,” he told Galloway.

We have been so fortunate to work with all the people that we’ve been working with because they truly made it happen when we though it wouldn’t happen.-Zahid Bashir, father of Ayla Bashir

The development is being well-received other medical professionals. McMaster University’s Dr. Mark Tarnopolsky, one of Canada’s leading Pompe disease experts, called it an “exciting development.”

“Clearly, we knew the earlier you treat, the better. And I thought, ‘Wow, this is the ultimate in early treatment.'”

According to Chakraborty, Ayla’s progress started not when she was in the womb, but with her sisters, Zara and Sara, who both died from Pompe disease, at 2.5 years and 8 months, respectively.

The couple, who also have a son and daughter without Pompe disease, learned a little more about the treatment process with each child diagnosed, according to Qureshi. After Zara’s death in 2011, the couple started having prenatal testing done for each child. They went into palliative care when Qureshi was pregnant with Sara in 2016.

So when they visited Chakraborty during Ayla’s pregnancy, Qureshi said they had hoped for a development in infantile Pompe disease.

“With this pregnancy, they really were keen to treat her as aggressively as possible, and give Ayla as good and as best chance as possible that she could have,” Chakraborty said. “And we wanted to facilitate that.”

She in turn led him to researchers at UCSF, who were “looking at what would it take to start treatment when the damage is being done, which is in fetal life,” Chakraborty said.

Zahid said he and Qureshi were then on a call with several members of the medical community, from UCSF, Duke and the Ottawa Hospital, talking about the possibilities of Ayla getting in-utero treatment.

“But … that involved Sobia and Ayla having to travel to the U.S., you know, still elbow-deep in the pandemic and having to get the infusions there,” he said.

“And we walked away from that call, I would say, kind of sad because we realized that there [were] just too many hurdles.”

This is where Ayla’s story entered “miracle territory,” Zahid said. Following that initial call in late 2020, Zahid and Qureshi learned that the medical experts had continued discussing moving the treatment to Ottawa — and they were going to follow through with it.

I really hope that she has a happy and healthy and very fulfilling life, and that Pompe does not become a barrier for her in any way.-Sobia Qureshi, Ayla Bashir’s mother

Chakraborty said it was through discussions with Ottawa Hospital’s Dr. Karen Fung-Kee-Fung that they realized there were a couple of reasons why they could do it in Ottawa instead.

“The treatment was also a standard treatment for Pompe disease, and it was one that we administer here to kids with Pompe disease. But it was given through that special procedure to access the fetal circulation.”

With the process moved to Ottawa, Qureshi and Zahid were able to get the necessary treatment for Ayla.

“This whole experience has been a whirlwind,” Zahid said. “But … we have been so fortunate to work with all the people that we’ve been working with because they truly made it happen when we though it wouldn’t happen.”

‘The best example I’ve ever heard’

According to Tarnopolski, the rare disease expert at McMaster, one of the key advantages this treatment has compared to others is timing.

“We like to treat early, because once you get damage to the muscle of both the heart diaphragm and your skeletal muscle, it’s very difficult to reverse that, so you’re pretty much just saving what you have,” he said.

“So this is the best example I’ve ever heard and actually quite an ingenious way of giving pre-symptomatic treatment to a disease that progresses very rapidly in the first few months of life.”

“When you infuse a protein into someone, that causes an immunological response,” he said. “So in utero, you’re more immunologically privileged, for lack of a better term, and you don’t mount the same immune response.”

“Therefore, there would be less ultimate buildup of antibodies, which can negate or attenuate the benefits of the enzyme replacement therapy.”

Despite that “double bonus,” Tarnopolsky said the treatment is going to be difficult to replicate again.

“It’s such a rare scenario, that so many things came together to allow them to actually be able to give this to someone in utero versus when you’re born, then you get diagnosed,” he said.

“It’s only going to be available for a very rare set of circumstances, where parents know that they’re carriers — and the only way you’re going to know you’re a carrier is if you’ve had a child … and then you would have been tested.”

The treatment, like other fetal interventions, carries the risk of preterm delivery, the study noted.

Tarnopolsky said he’s excited to see how Ayla develops, and very happy for the family.

As for Qureshi, she just hopes the treatment continues working properly — and her daughter gets the chance to grow up like any other child.

“I really hope that she has a happy and healthy and very fulfilling life, and that Pompe does not become a barrier for her in any way,” she said.