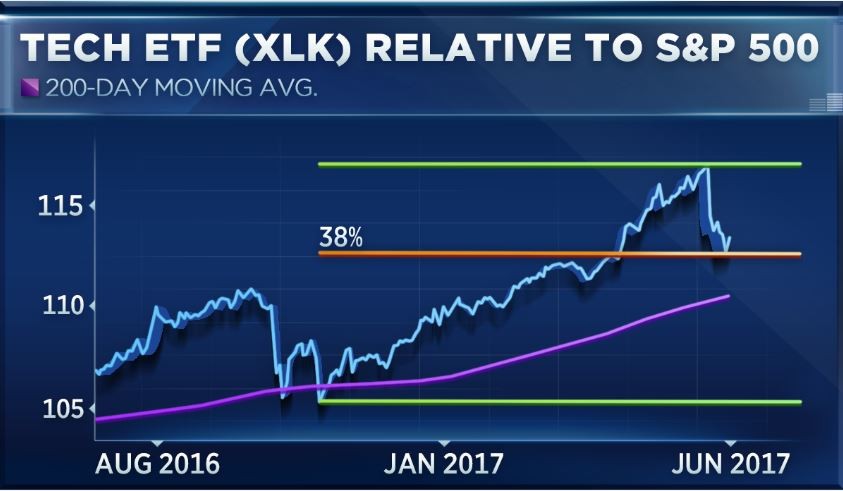 Some strategists are forecasting further upside for technology stocks based upon technical indicators and options market activity after the group posted its best day of the year.

Technology stocks appeared to recover on Monday after several sluggish days earlier this month, when a market rotation caused the sector — particularly some major players like Apple and Microsoft — to slide. The information technology sector is still leading the market as the best performer.

The technology sector has indeed underperformed relative to the broader market over the last two weeks, Wald pointed out, and had retraced 38 percent of its gains since December. Such a level of retracement is considered a classic technical indicator, Wald noted, and at this point he believes the sector will begin to stabilize.

“This weakness we’re seeing is all within the trend. We’re seeing this pullback against a rising 200-day moving average. We define that setup as a near-term opportunity to buy long-term strength,” he said.

Glancing specifically at the technical setup of the technology sector exchange-traded fund relative to the broader market, Wald sees tech as a “tactical idea” and says the sector will fare fine in the long-term.

“The phrase that people were using was ‘the tech comeback,’ you know, and with these stocks up 15 percent for the year, we’ll leave that to LL Cool J to call it a comeback. But I do believe that we are seeing upside call buying in the tech sector, in the options space,” he said Monday on CNBC’s “Power Lunch.”

Investors buy call options when they believe a stock will rise. Specifically, Davitt has observed upside buying of QQQ 145-strike calls. Those strikes would place the Nasdaq 100-tracking exchange-traded fund at nearly 11 percent above current levels.

“Somebody bought about half billion dollars’ worth of those. So we’re seeing people gaining exposure back into the tech sector using options on the broader base tech indexes, which are mostly the FANG stocks,” Davitt said, referring to the technology quartet of Facebook, Amazon, Netflix and Google parent Alphabet.

Not all strategists are so optimistic.

The technology sector ETF XLK and the Nasdaq 100 last week made a “lower low” on a closing basis, and closed down for the second consecutive week, Miller Tabak equity strategist Matt Maley wrote Monday.

“That has only taken place one other time this year (in the first two weeks of April), but the decline in the XLK was only 1.76% back then … while it was twice as strong this time (-3.45%),” Maley wrote.

Any further breakdown in the group in the near term would raise concern for the rest of the market, Maley wrote.