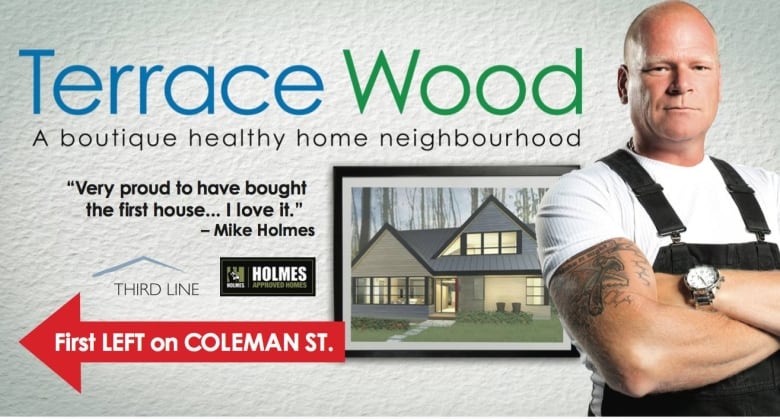 It was a housing project with promise: a subdivision of unique homes in picturesque Meaford, Ont., advertised as “Mike Holmes Approved.”

Mike Holmes is a contractor and television personality known for rescuing homeowners from botched construction jobs.

In 2016, Myles Johnson and Andrea Hart of Toronto, who were looking for a place to retire, bought in.

Holmes helped promote the development, TerraceWood, which included appearing on a billboard in Meaford.

In a YouTube video, Holmes praised the project’s builder, Third Line Homes, saying it builds homes with “mould and moisture resistant walls,” and “a commitment to make it right.”

But things didn’t go right, according to Hart and Johnson. The couple said after their home was finished in 2018, they discovered it was riddled with defects — including mould and structural problems — which they say the builder didn’t adequately address.

“It’s been a nightmare,” said Johnson, 70. “[Our retirement plans] just sort of imploded and you just sort of say, ‘What in hell happened?'”

According to allegations in a lawsuit filed in Ontario Superior Court, “The TerraceWood Project involved a perfect storm of errors and neglect by multiple parties” involved in the creation, inspection and/or promotion of the development.

The suit was filed in December 2021 by Tarion, a consumer protection organization established by the Ontario government to help ensure new homes’ defects under warranty are repaired.

Tarion alleges 14 TerraceWood homes were built with numerous deficiencies, such as mould problems due to leakage, HVAC issues, and major structural flaws, “many of which raise serious safety concerns.”

The suit targets The Holmes Group [Holmes’s company]; Mary-Jo and Paul Osborn, principals with Third Line Homes; the Municipality of Meaford, plus a dozen parties involved in the design or construction of TerraceWood between 2015 and 2019.

Tarion claims Third Line Homes failed to remedy the problems with the house, which were under warranty. As a result, said Tarion, it has been footing the bill to fix them. It’s seeking damages estimated at more than $8 million from the defendants to recoup its costs.

WATCH | Mike Homes discusses the project in this YouTube video:

Johnson and Hart said they had to vacate their TerraceWood home in January and move into a family cottage to make way for major fixes, such as replacing a deficient HVAC system and structural repairs to both sides of the house.

“We haven’t had a retirement,” said Hart, standing in their kitchen which is covered in plastic sheeting due to construction. “I came up here healthy and now I’m just — I feel a wreck.”

On this day, there was scaffolding and a large hole dug up on one side of the house where the couple said structural work is being done.

“I just don’t know how things could get so bad,” said Hart.

Tarion alleges the Municipality of Meaford failed to perform adequate home inspections. In its statement of defence, the municipality refutes the claim and said it did everything by the book.

Tarion also alleges The Holmes Group had “contractual agreements” with some homeowners to do additional inspections, which it failed to perform adequately or at all.

However, the company told CBC News that in the case of TerraceWood, the inspections were offered as an upgrade package — which no homeowner bought.

But in its statement of defence, The Holmes Group claims it “made no representations” to anyone regarding the TerraceWood project and, in fact, “had no involvement whatsoever” with the project.

While the company may not have made representations, Holmes himself took part in promoting TerraceWood, which included participating in a find-the-Mike-Holmes bobblehead contest.

Holmes also said in advertising that he bought one of the houses, which he visited and gave a thumbs up.

“He came up for a photo-op and put his thumbs up on his house there. Then that was sold,” said Johnson.

According to land registry records, a numbered corporation connected to Mike Holmes sold the house in 2017. It was listed as a “Holmes Approved Home.”

The house is included in the Tarion lawsuit.

According to court records, the couple who bought the house filed a notice of legal action in 2019 against the numbered corporation, Mike Holmes, Third Line Homes and several other parties, alleging breaches of contract, negligence and misrepresentation. No legal action was ever taken.

In response to an inquiry, The Holmes Group referred CBC News to its lawyers. They declined to comment while the Tarion lawsuit is before the courts.

What about Third Line Homes?

Another TerraceWood homeowner, Jacquie Charron, 61, said she was startled when she was told her house needed structural repairs.

“It just blew my mind,” she said. “This is kind of my life savings that I put into this home.”

The repairs were completed in June. Charron said Tarion covered the costs.

Charron said Holmes’s endorsement was a big selling point. But she points the blame at Mary-Jo and Paul Osborn with Third Line Homes.

“I have no idea who is really responsible, but, to me, that’s who I bought the home from, and that’s who I trusted to build me a good home.”

Tarion claims the Osborns “failed to take reasonable care constructing the homes,” and “failed to discover and remedy deficiencies in the construction.”

In the statement of defence they filed in court, the Osborns blame Tarion.

The couple claims the homes were properly constructed and free of major defects. They allege Tarion excluded them when dealing with homeowners’ complaints about defects, and incorrectly stated that Third Line Homes was “unwilling/unable” to address the complaints.

As a result, said the Osborns, they were unable to pinpoint and rectify legitimate complaints, and homeowners withheld money owed to Third Line homes — which ultimately led to its financial demise.

The company became insolvent in 2019.

In an email, Tarion spokesperson Andrew Donnachie claims the Osborns’ allegations are “unfounded and without merit.”

As the legal battle gets underway, Hart and Johnson said they’re still waiting for word when they can move back into their home. Following their troubles at TerraceWood, Hart says she’s not even sure if she wants to return.

“I would like to get rid of it, sell it and move to a better place with better memories,” she said.