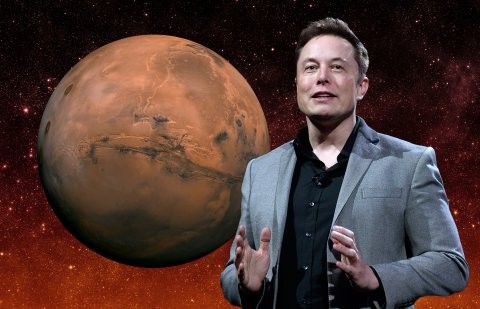 Elon Musk’s plan to start a colony on Mars might sound far-fetched, but he’s apparently very serious about it. So serious, in fact, that he published a paper outlining the required steps in the June issue of the journal New Space.

Musk’s theory is that populating Mars is essential to humanity, since Earth, he assumes, will eventually become uninhabitable. “I do not have an immediate doomsday prophecy,” he writes in the paper, “but eventually, history suggests, there will be some doomsday event.”

The SpaceX founder’s plan requires huge improvements on existing technology. While Musk estimates that a one-way trip to the Red Planet would currently cost about $10 billion per person, he wants to see that price get down to about $200,000, largely by making rockets and spaceships reusable. He also envisions fuel refilling stations in space, and a propellant plant on Mars.

Those are just the basics of Musk’s vision, which you can read in its entirety here. The paper is also full of wild details. It’s unclear how much of this will come to fruition, but it sure makes for entertaining reading.

Passengers, cargo, and extra fuel will take off in one ship. Then, once they’re out of Earth’s atmosphere, they’ll transfer to a different ship that’s waiting for them in space. This will help keep development costs lower, Musk writes, since it won’t require building a giant ship that can hold enough fuel to make the trip all the way to Mars on its own. Eventually, Musk wants to have 1,000 ships waiting in space to ferry passengers each time Earth and Mars align every 26 months.

The Saturn V rocket that got humans to the moon had five engines. Musk says that the rocket for Mars travel will need to have 42. The Falcon Heavy, which is expected to have a demo launch later this year, has 27 engines. Getting a massive spaceship into deep space requires an insane amount of thrust–several million tons’ worth. With 42 engines, Musk writes, the voyage won’t be doomed even if some of the engines fail.

3. The spaceships will be roomy–and fun.

To start, Musk expects the trips to Mars to take about 80 days. That’s a long time to be in closed quarters. To draw interest from potential travelers, Musk proposes that the ships have plenty of breathing room and entertainment. He envisions movies, lecture halls, cabins, and a restaurant as well as “zero-gravity games.” “It will be really fun to go,” writes the ever-optimistic Musk. “You are going to have a great time!”

4. Musk wants there to be pizza joints on Mars.

Musk’s version of Mars doesn’t sound like it will be all that different from your earthly local neighborhood. In describing the ships that will carry the building materials to Mars, he writes that they will need to be big enough to “carry the luggage and all of the unpressurized cargo to build propellant plants, and to build everything from iron foundries to pizza joints.” No mention yet of how space pepperoni tastes.

5. He doesn’t think we should stop at Mars.

Part of Musk’s plan is to have a propellant plan on Mars so spaceships can make return trips to Earth. An added benefit: The ships won’t be limited to traveling only to Earth. Musk says that Mars-dwellers will be able to make fly-bys past Jupiter. By setting up propellant plants on other planets or their moons, he says, people will eventually be able to access the entire solar system.

6. He says he’s getting rich in order to fund the project.

Musk is worth an estimated $17.1 billion, according to Forbes. In the paper, he claims that he plans to invest much of that money into getting to Mars. “I really do not have any other motivation for personally accumulating assets,” he writes, “except to be able to make the biggest contribution I can to making life multi-planetary.”