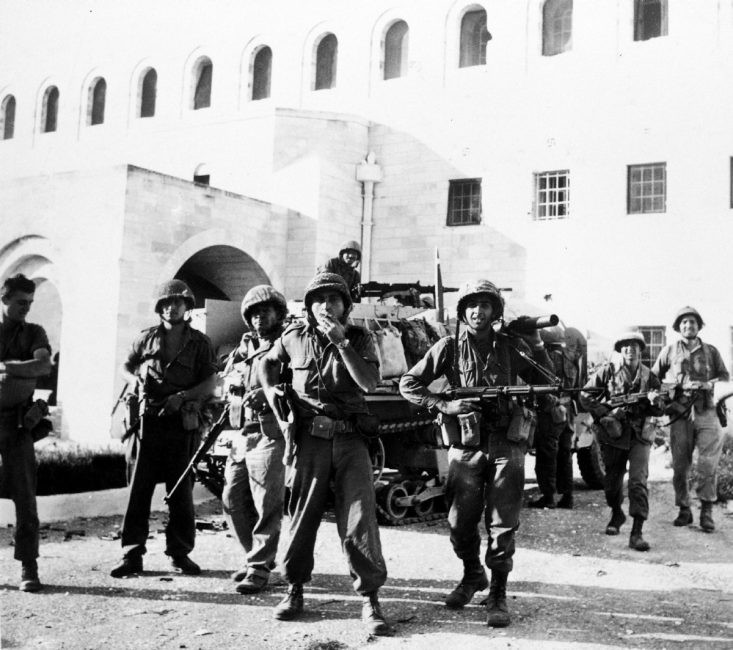 Israelis and Palestinians mark 50 years since the Six-Day War next week as the gap between them further widens, with both sides deeply scarred by years of violence, failed negotiations and broken promises.

The anniversary comes as hopes dim for a two-state solution to the Israeli-Palestinian conflict and with heavy scepticism surrounding US President Donald Trump’s pledge to reach the “ultimate deal”.

The 1967 conflict that greatly empowered Israel but began its continuing occupation of Palestinian land is seen from starkly different viewpoints.

With its stunning victory over neighbouring Arab countries, Israel vastly expanded its territory with global implications.

For Israelis, the war meant the culmination of the Jewish people’s 2,000-year quest to return to Jerusalem.

Palestinians see the theft of their land and a gradual effort by hardline Israelis to extend their country from the Jordan River to the Mediterranean — leaving no room for a Palestinian state.

A significant number of Israelis, including members of Prime Minister Benjamin Netanyahu’s government, openly agree that they want to end the idea of Palestinian statehood.

Some argue that Palestinians who want to stay and live in a Jewish state could be allowed, but others should move elsewhere.

“We want to try and maybe give them compensation,” said Michael Lafair, a 43-year-old Israeli lawyer who, along with his children, was in Jerusalem last week for events marking Israel’s victory in 1967.

Steps away at the Damascus Gate entrance to Jerusalem’s Old City, captured by Israel from Jordan in 1967, there was pride but little hope among Palestinians.

“We tell them we are staying here,” Mohammed Castiro, 51, said at the coffee stand his family has run since 1965. “This is our land and we don’t leave it.”

The divisions and signs of conflict are easily found, from the disputes over holy sites in Jerusalem to the Israeli separation wall lining the West Bank, not to mention the blockade of the war-weary Gaza Strip.

At the same time, Israel has turned itself into the Middle East’s premier military power and the self-proclaimed “start-up nation,” its high-tech industry gaining global influence — a remarkable achievement following the country’s 1948 founding in the wake of the Holocaust.

But there are warnings Israel could find itself on a suicide mission, risking an “apartheid” state if it heeds calls from the right to abandon the two-state solution and annex most of the West Bank.

With Israeli settlement building continuing and Palestinians divided between president Mahmud Abbas’s Fatah and Hamas, the Islamist movement that runs the Gaza Strip, some wonder whether the two-state solution is already dead.

Still, for the international community, an independent Palestinian state alongside Israel remains the only viable option.

“We don’t know if the two-state solution is dead or not, but it is certainly getting harder to achieve with each passing year,” Dan Shapiro, US ambassador to Israel under Barack Obama and a senior fellow at Tel Aviv’s Institute for National Security Studies, told AFP.

“There may even be a tipping point, and the thing about tipping points is you sometimes don’t know you’re past them until you’re well past it.”

The 1967 war was a triumph for Israel, which defeated Egypt, Jordan and Syria in fighting that lasted from June 5 to 10.

In doing so, it captured east Jerusalem, the West Bank, the Gaza Strip, the Sinai Peninsula and the Golan Heights.

Israel would later sign historic peace agreements with Egypt and Jordan, but its conflict with the Palestinians who populated east Jerusalem, the West Bank and the Gaza Strip would worsen.

It was followed by the Oslo accords and a handshake between Palestinian leader Yasser Arafat and Israeli prime minister Yitzhak Rabin, leading to the peace process and enormous hope.

But Rabin was assassinated by a Jewish extremist in 1995 and another, far more violent intifada broke out in 2000.

Netanyahu’s current government is seen as the most right-wing in Israel’s history, and the influence of the country’s pro-peace camp has severely waned.

On the Palestinian side, president Mahmud Abbas is 82 and unpopular.

Abbas’s rival Hamas has sought to soften its image but remains firm in its position that it will not recognise Israel.

Peace efforts have meanwhile gone nowhere since a US-led initiative collapsed in April 2014.

A recent survey said 78 percent of Israelis think there is no chance of a peace agreement in the foreseeable future.

Another poll found 60 percent of Palestinians believe the two-state solution is no longer viable.

– ‘Need to protect ourselves’ –

Aliza Lavie, an Israeli parliament member from the centrist Yesh Atid party, said she still supports a two-state solution, but her country must be realistic.

It must not sacrifice its security, said the 52-year-old who calls the disputed city of Jerusalem “our capital, our heart”.

“We should come back to the table and find a solution,” she said.

“But we have to do it with understanding that we need to protect ourselves.”

Hanan Ashrawi, a senior Palestine Liberation Organisation member born in the West Bank city of Nablus, was studying in Beirut in 1967 and returned home six years later “face to face with the occupation.”

She called the war the start of “the most painful chapter of my life.”

“And to see that not only was a state created on your own land, but now, not only is it expanding, but it is also holding you captive. It is also depriving you of your most basic rights.”