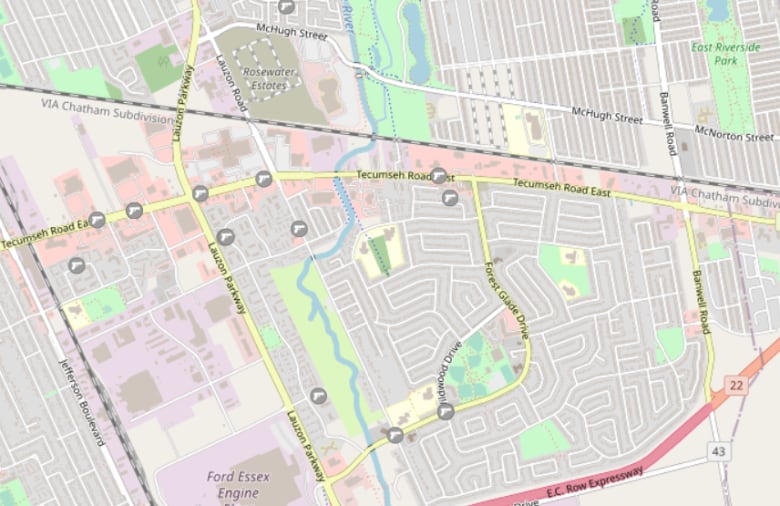 Joshua Fryer, 21, of LaSalle, Andrew Meloche, 19, of Windsor and a minor who cannot be named face charges including five counts each of attempted murder.

Two others, both 21, have been charged with accessory after the fact — attempted murder.

Windsor police Supt. Jason Crowley, who announced the charges at a news conference Tuesday afternoon, said for “investigative purposes,” police are not saying which of the three accused they believe fired the gun.

“The investigation is continuing and of concern is that the firearm has not been located,” Crowley said.

Police are also still looking for one suspect, and he is considered armed and dangerous.

Investigators are still looking into the circumstances surrounding the shooting, but believe it was sparked by an altercation inside the Super Bowl bowling alley.

Crowley said those wounded are young men, likely in their 20s.  Some of them aren’t co-operating with investigators, he said.

There’s no indication the shooting is gang related, he said.

The incident started about 1 a.m. ET Saturday when someone shot into a crowd of about 20 to 25 people during a fight outside the bowling alley, said police. They initially said they were looking for one suspect.

The five were sent to hospital suffered non-life-threatening injuries but have since been released.

Jason Bellaire, Windsor Police Service’s acting chief, said earlier on Tuesday that several suspects believed to be involved in the incident in the city’s Forest Glade area were arrested overnight, and one suspect was arrested earlier Monday.

On Monday, police said they were looking for three suspects who were considered armed and dangerous. Police confirmed Tuesday that two of those suspects have been arrested and they’re still searching for a third.

Windsor Police have reportedly made arrests in the weekend shooting that left 5 people wounded. Someone shot into a crowd of at least 20 people during a fight outside an east-end bowling alley. Host Peter Duck speaks with Jason Bellaire, the acting chief of the Windsor Police Service. 9:54

Members of the Forest Glade community shared with CBC News their shock and discomfort with the violent event.

Ward 7 Coun. Jeewen Gill said many residents are concerned with the uptick of gun violence in the area. Greg Lemay, a community advocate and past council candidate, said he’s leading a push for more neighbourhood watch patrols — building off the eight already active in Forest Glade.

“I mean, to a large degree, this type of behaviour is not very predictable,” said Bellaire. “You know, to think that somebody in an area like that would pull out a gun and start shooting is not something that we see often at all.”

At least 13 incidents involving offensive weapons were reported in the area of Forest Glade and the nearby intersection of Tecumseh Road East and Lauzon Parkway between April 1, 2021, and Monday, according to open source data, published by the Windsor Police Service.

But Bellaire said he does not believe the city, especially the Forest Glade area, is becoming more dangerous.

“Forest Glade is a very safe community. They actually have a very low crime rate,” he said. “They have had a couple of incidents of notable violence and that has realistically rallied the community there to speak. And that’s what they should do. You know, there should be no apathy to this type of crime.”

Bellaire said Windsor police have deployed more officers to the neighbourhood to give residents a sense of safety. He said police are working with Gill to ensure officers are always available to speak with the public.

According to the Windsor data, there was a total of 251 offensive weapons incidents in roughly the last year. The data does not specify the type of weapons used.

Bellaire said there’s been a slow rise in the number of gun-related incidents, which aren’t a new problem.

“For the most part, these firearms are manufactured or they’re distributed out of the United States, and then at some point they make their way into Canada, whether they’re smuggled, stolen or sold illegally,” said Bellaire, adding that some firearms registered in Canada end up in the illegal firearms market.

“But by and large, the U.S. supply of firearms makes its way to Canada through criminal activities and networks, both in Canada and the United States.”