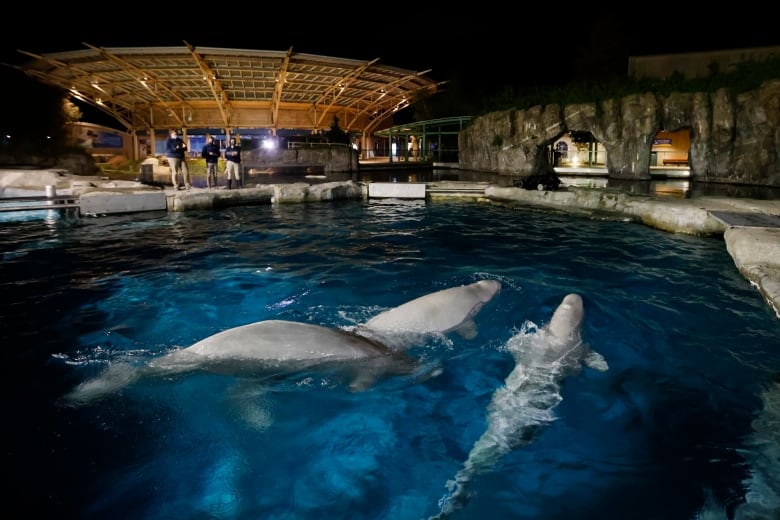 Five beluga whales from Marineland in Niagara Falls, Ont., are doing well after being moved to the U.S. over the weekend, an American aquarium said Monday.

The five belugas will eventually join the park’s three current belugas and will be part of a large research project, she said.

Marineland did not respond to several requests for comment.

Tuttle said officials from Mystic had approval from the Canadian federal government to avoid a quarantine while they were in the country. They stayed in recreational vehicles at Marineland’s sprawling property, she said.

On Friday, they dropped the water in one of Marineland’s tanks and used a custom-made net and a crane to hoist each one into five smaller, water-filled tanks.

Those were then loaded onto five transport trucks and driven, with a police escort, to Hamilton International Airport. Three were loaded onto the civilian version of the C-130 Hercules military plane.

That process was reversed after landing in Groton-New London Airport near Mystic Aquarium, Tuttle said. That same plane then flew back for the other two whales.

The move overcame numerous hurdles, including approvals from both the Canadian and U.S. federal governments along with a court battle against animal activists.

Fisheries and Oceans Canada approved the transfer of three whales last month and two others last week with the condition the whales will not be bred or involved in performances at the new facility.

“Before issuing the permits, DFO carefully considered a variety of factors, including the standards and animal care practices at the importing facility and whether or not the transfer would be harmful to the mammals,” said Fisheries spokesman Barre Campbell.

Last fall, the National Marine Fisheries Service and the U.S. Commerce secretary approved the research project and the importation of the whales.

They rejected a portion of Mystic’s initial proposal that proposed examining various aspects of breeding.

Tuttle said the females will be separated from the males during ovulation as the means of birth control.

She said researchers will be working on a variety of projects, including how best to handle the belugas while extracting blood, for example, so that it could be replicated on wild belugas.

There are seven approved research studies on the belugas that include examining immune response to environmental or human stressors, hearing and physiological response to human-generated sounds and developing non-invasive techniques to use on free-ranging, stranded and endangered belugas.

In December, the move hit another snag when it was determined three of the whales originally scheduled to move had become sick.

Frankie, Mira and Qila all had ailments, some of which were considered transmissible diseases, according to documents filed with the National Marine Fisheries Service in December.

For Frankie, health concerns included “esophagitis and gastric ulcerations with ongoing active regurgitation,” Mystic wrote in an amendment to import the whales. The whale also had a gastrointestinal infection that was potentially transmissible.

Mira had a respiratory fungal infection and lesions on her blowhole while Qila had “a diagnosis of septic gastritis with ongoing active regurgitation.”

The issues posed “health concerns for safe and successful transport and acclimation.”

Marineland has long dealt with overcrowding among its beluga population.

In a March 2019 affidavit, Marineland president Marie Holer wrote that the move was being done in part to increase space for its remaining whales. At that time, she said the facility had 54 belugas.

Marineland did not respond to questions about its current complement of belugas.

Connecticut-based Friends of Animals and other activists sought to block the transport in a lawsuit last fall against the U.S. Commerce secretary and National Marine Fisheries Service, which had approved the research permit. A federal judge in March declined to issue an injunction.