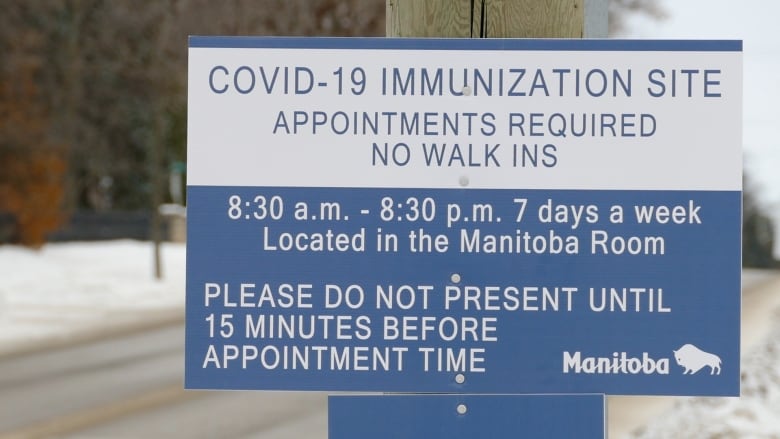 To make sure she stays that way, the Brandon, Man., mom booked regular annual flu shots on Nov. 24 for herself and her daughter at Brandon’s Keystone Centre.

But she says she got more than she asked for.

“We went in there to get our flu shots, and instead of getting our flu shots they gave us both adult Pfizer vaccines,” Bardarson said.

The Keystone Centre is also home to one of the province’s COVID-19 vaccination supersites.

A pediatric version of the Pfizer-BioNTech COVID-19 vaccine, which is one-third the dosage of the version for those age 12 and up, was recently approved for use in kids ages five to 11.

But children under five — like Dali — are not eligible for any of the COVID-19 vaccines available right now.

As for Jenna Bardarson, she’s had two COVID-19 vaccine doses and isn’t due for her third until January.

She was shocked when a health-care provider told her a mistake was made.

“I was concerned about … my daughter as we were starting to have side-effects and stuff,” she said. “I really was kind of angry and wanted to speak to someone.”

Bardarson says both she and her daughter had fevers and headaches. Dali started vomiting a few days after they got the shots.

Over a week later, Bardarson says still hasn’t been able to get an answer from health officials about how the vaccine they were mistakenly given could impact her health, or her daughter’s.

Bardardson says she doesn’t want her experience to deter others from getting vaccines, but encourages them to ask questions.

“If you are going in and taking your child or even yourself in just a flu shot … double-check with your health-care provider or whoever is doing it just make sure they have the right medication,” she said.

Bardarson says she understands that health-care workers may be tired and overworked, but says mistakes like this are dangerous.

In an emailed statement to CBC, Manitoba Health and Seniors Care acknowledged a woman and a three-year-old were mistakenly given an adult dose of the Pfizer-BioNTech vaccine, and said it has investigated the incident.

Such medication errors “are rare, but they do occur,” the statement said.

The parent “was informed of the error and provided information about the risks, which in this case was low,” the health department said.

It also said staff from the Prairie Mountain regional health authority reached out to Bardarson and further discussed the matter, and provided her with an update on the investigation.

“Followup conversations have occurred with the immunizer involved, and based on their immediate recognition of the error and disclosure to a supervisor, no further corrective action has been taken,” Manitoba Health said.

Bardarson told CBC she hopes new measures will be put in place to make sure a similar incident doesn’t happen to anyone else.