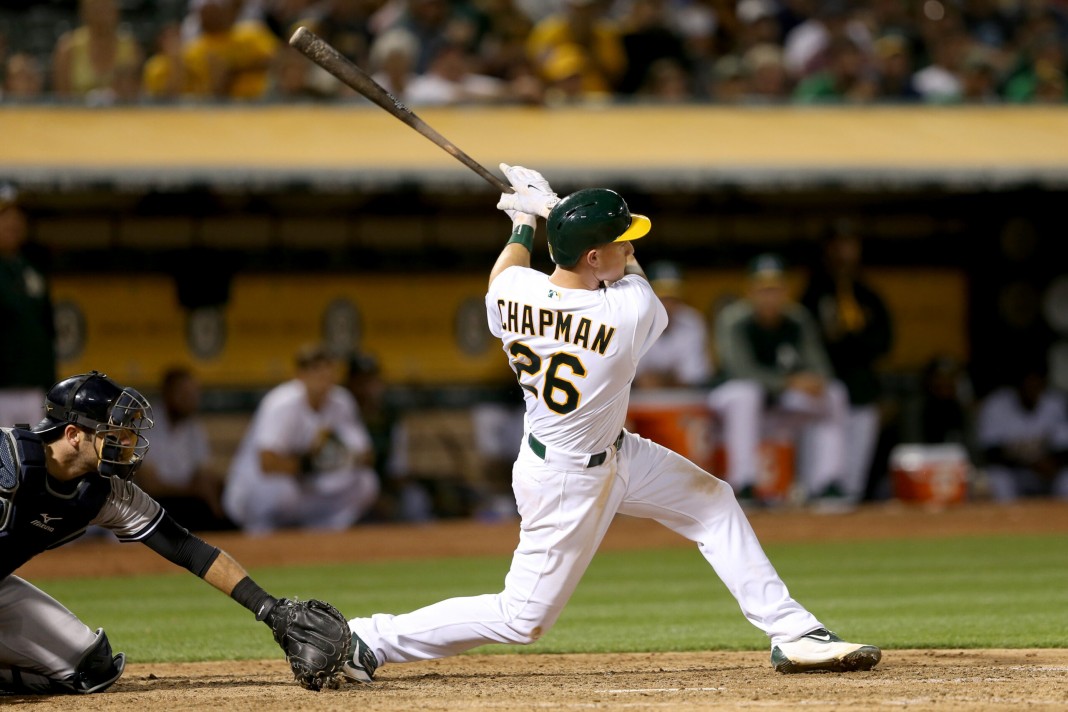 The Oakland A’s 2017 season is nearly half over, but the youth movement officially reached full swing on Saturday. The A’s began the day by calling up their top prospect, infielder Franklin Barreto, and their lineup featured three rookies who are so new that they haven’t even homered yet in the big leagues. Then all three of them went deep in the same game.

They wasted no time getting going. Standing in as the second batter of the day, RF Matt Olson blasted a two-run shot to give the A’s a lead in the 1st inning.

Olson is a Three True Outcomes hitter, who will pile up lots of walks, strikeouts, and dingers. He swatted 17 long balls in just 58 games in Triple-A this year, and now we know what the power looks like in real life.

Next on the docket was CF Jaycob Brugman, who went yard in the 2nd inning.

Not only was this Bruggy’s first round-tripper, but also his first extra-base hit through 15 MLB games. He’s not a slugger, but it’s nice to see that he has the pop to drive one out now and then. In the meantime, he’s displaying excellent plate discipline as always and has managed a respectable .349 OBP thanks to his ability to take a walk.

Finally, there was Franklin Barreto, playing 2B in his MLB debut. (Note: Also the 38th anniversary of Rickey Henderson’s debut.) Barreto wasn’t even supposed to be in the lineup, but stepped in when Jed Lowrie was a late scratch. It only took him until the 3rd inning to launch one out to left.

In his first at-bat he struck out awkwardly on three pitches. In his second at-bat he homered. That’s a learning curve I can get behind.

Unfortunately, there were no more hitters in the lineup who were still looking for their first big league dinger, so the streak was broken in the 4th inning. The A’s ignored my plea to dump the DH spot and have pitcher Daniel Gossett bat, which is probably for the best.

But fear not, they found time for an encore in the 7th. Olson went deep again to notch his first multi-homer game.

Brodie Brazil and NBCS are excited to inform you that these two home runs are to be referred to as the Olson Twins.

The players were stoked about all these dingers.

And they made some history too.

There are a few levels in terms of making baseball history. Sometimes you do something that hasn’t been done in a few years. Other times it hasn’t been done since a player from the last generation, maybe 20 years ago. Still others, it’s been since another age entirely, even before you were born.

But when the record is so old that it was set over a century ago, by a team none of us have ever heard of (don’t lie), in league that lasted only a few seasons and is at best a footnote in history? That’s when you know you’ve done something special. Even if it came against James Shields, the patron saint of serving up jacks.

Of course, the Three Muscleteers (I’m running out of words for dingers and power) weren’t even the only rookies in the lineup that day. A few more highlights:

This is the team we’ve been waiting three years to see. Now they’re here, and it’s spectacular. Hopefully we’ll look back on this game as one of the turning points that put the A’s back on a winning track.

By the way, as if that weren’t enough highlights, Bruggy also made this sweet catch in CF.