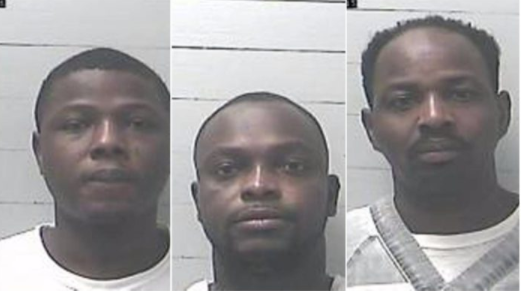 Three Nigerians were convicted in U.S. district court this week for carrying out an elaborate fraud scheme that spanned at least 16 years, the U.S. Department of Justice announced Thursday.

The trio who were extradited from South Africa to the Southern District of Mississippi in July 2015, were sentenced to prison this week for their roles in a large-scale international fraud network.

A total of 21 defendants were charged in this case, 12 of whom have pleaded guilty to charges related to the conspiracy, and 11 of whom have been sentenced to date.

One of the leaders of the conspiracy, Teslim Olarewaju Kiriji, 30, was previously sentenced to 20 years in prison. Six other defendants – Adekunle Adefila, 41; Anuoluwapo Segun Adegbemigun, 40; Gabriel Oludare Adeniran, 30; Olufemi Obaro Omoraka, 27; Taofeeq Olamilekan Oyelade, 32; and Olusegun Seyi Shonekan, 34 – were previously sentenced to 10 years in prison each for their roles in the conspiracy.

According to the plea agreements and evidence at trial, the defendants and their co-conspirators carried out numerous internet-based fraud schemes dating back at least to 2001. These schemes involved using unsuspecting victims to cash counterfeit checks and money orders, using stolen credit card numbers to purchase electronics and other merchandise and using stolen personal identification information to take over victims’ bank accounts. As a whole, the conspiracy involved tens of millions of dollars in intended losses.

To accomplish their fraud schemes, the conspirators recruited the assistance of U.S. citizens via “romance scams,” in which the perpetrator would typically use a false identity on a dating website to establish a romantic relationship with an unsuspecting victim. According to trial evidence and plea documents, once the perpetrator gained the victim’s trust and affection, the perpetrator would convince the victim to either send money or to help carry out fraud schemes. For example, the defendants admitted that they used romance victims to launder money via Western Union and MoneyGram, to re-package and re-ship fraudulently obtained merchandise and to cash counterfeit checks.