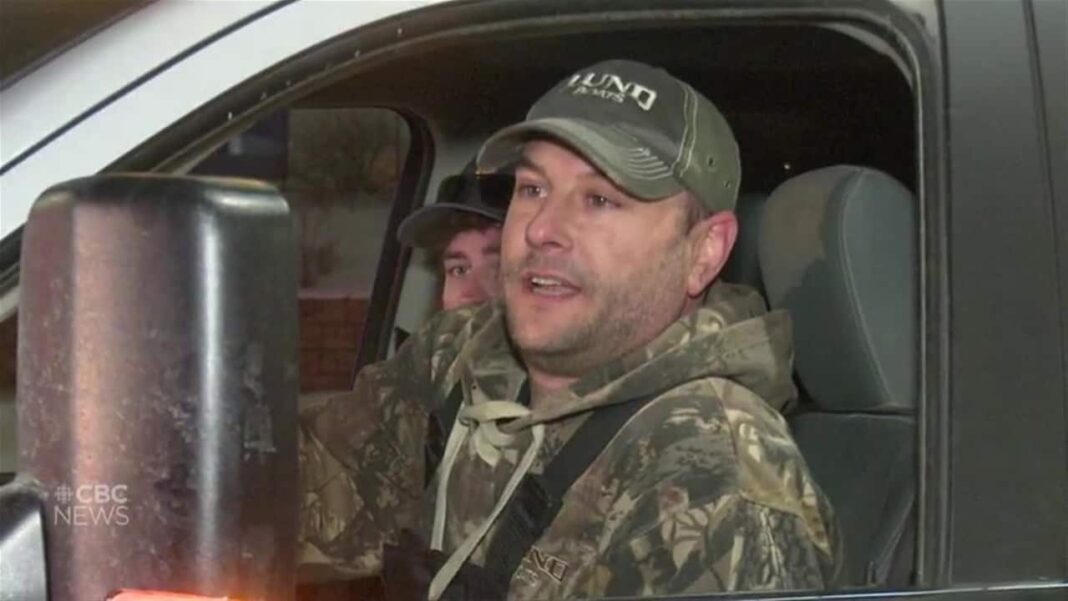 People protesting pandemic restrictions and lockdowns are preventing vehicles from using the Ambassador Bridge for a second day, with traffic halted from Michigan to Windsor, Ont., and limiting traffic to the U.S.

The bridge is one of the busiest international land border crossings in Canada and a major route for transport trucks.

On Tuesday, protest cars and trucks are lining Windsor’s Huron Church Road, the main road connecting Highway 401 to the bridge. Police are asking people to avoid the area, which has been clogged since Monday afternoon.

Dozens of vehicles are jamming the area around the bridge in solidarity with convoy protests targeting Ottawa and including other parts of Canada.

An unvaccinated truck driver, Jack Dyck, was among protesters at the site on Tuesday. He hopes Ottawa will drop the policy that all Canadian cross-border essential workers — including truckers — must show proof of vaccination at a port of entry to avoid testing requirements and quarantine.

“We’re not giving up. It’s gonna stay until they drop all mandates, as long as it takes. We have to. We get more backup coming, and we’ll just keep pressure on as long as it takes,” he said, adding he used to cross for work, but “can’t anymore because of the vaccine.

“I don’t take the jab and I’m not planning on it, and I have a family, I have a house. So I figure, I just quit for a couple of weeks. I’ve been off for just about three weeks, just doing this, trying and hopefully they can drop it so I can get back to work.” 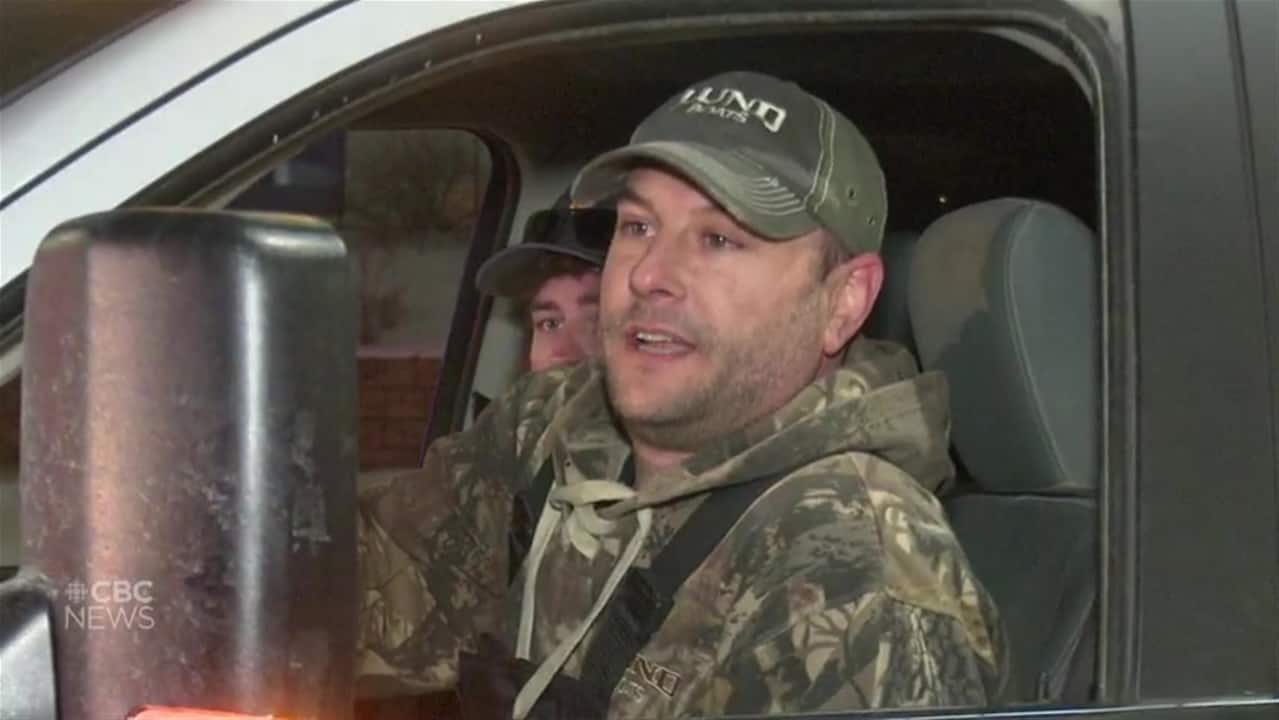 Protesters tell CBC News they are fed up with COVID-19 restrictions and feel they have not option but to demonstrate for their freedoms. 1:02

Other protesters told CBC News late Monday night that they had no plans of leaving.

“We did the rally Saturday, Sunday; we got here today around one o’clock.… By the looks of it, we’re here to stay,” said Nick Friesen, who is from nearby Leamington, Ont., and had set up a barbecue on Huron Church Road.

Sam Kovak of Woodslee, Ont., said he was at the protest “for my kids, just to get it back to normal.”

“They haven’t played hockey, it’s been a disaster. Just end, give us back what we need to live again. [Prime Minister Justin] Trudeau, [Ontario Premier] Doug Ford, just listen to us.” 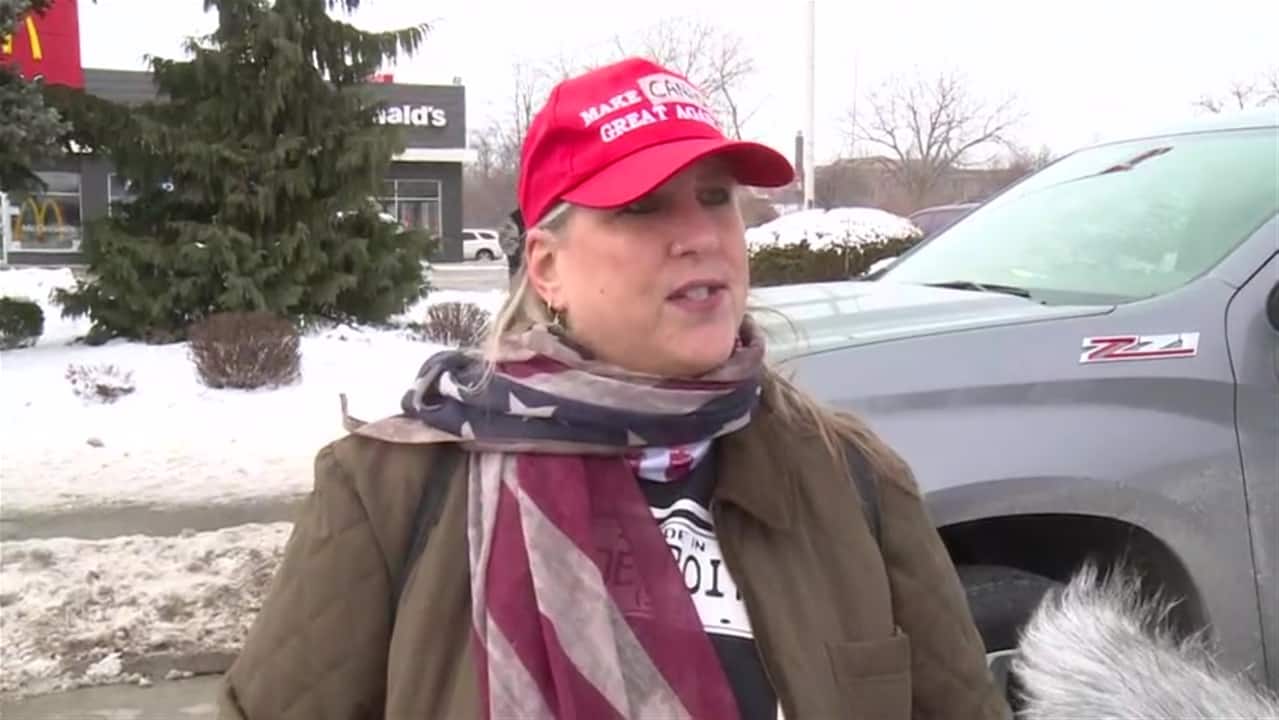 Henry Fast from Comber, Ont. and Natalia Drouillard from Windsor talk about why they’re protesting on Huron Church Road, blocking traffic to the Ambassador Bridge. 0:51

Kovak said he is frustrated after he and his wife started a business — a hockey training camp that teaches mindfulness — believing COVID-19 restrictions were lifted for good, but couldn’t survive having to close their doors again.

“I was in Ottawa the past two weekends; all the people I talked to were vaccinated. It’s got nothing to do … just give us our freedom back,” he said. “Now we’re in the exact same position [as] two years ago; my kids are still sitting at home, my wife is still sitting at home.

Limited traffic to U.S. a major impact to trade

The Canada Border Services Agency (CBSA) listed the Ambassador Bridge as “temporarily closed” just minutes before midnight Monday, in an update to its website dedicated to border wait times.

Windsor police were able to keep one lane of U.S.-bound traffic open Monday and Tuesday, accessed from a side street adjacent to the bridge’s entrance area. No lanes are open to allow vehicles to exit the Ambassador Bridge into Canada.

“[Tuesday], there has not been any disorderly activity or violence, so there’s been no arrests,” she said.

Mizuno said Windsor police have been in “constant communication” with the demonstrators since the protest started, to keep peace in the area of the bridge. Costs to the city weren’t known Tuesday, but Mizuno said they will be “significant.”

She said she understands the concerns of the public surrounding the demonstration.

“We continue to actively engage and monitor these demonstrations. Those who are found committing crimes and acts of violence will be investigated, and charges will be laid.”

It’s not that easy to simply remove and tow vehicles from the area,” Mizuno said. “We’re always having to balance individuals’ rights and freedoms with the need to maintain public peace and order. We also have to weigh the risk to the community as we take any action.”

Ontario Provincial Police and the CBSA are directing cross-border travellers to use the Windsor-Detroit Tunnel, and  commercial traffic to the Blue Water Bridge in Sarnia nearly a two-hour drive away.

On Tuesday night, the CBSA said commercial vehicles at the Blue Water Bridge were experiencing delays as long as three hours when crossing the border.

Windsor–Tecumseh Liberal MP Irek Kusmierczyk, who’s condemning the protest, said he is in talks with Prime Minister Justin Trudeau, the public safety minister and the minister of transport. 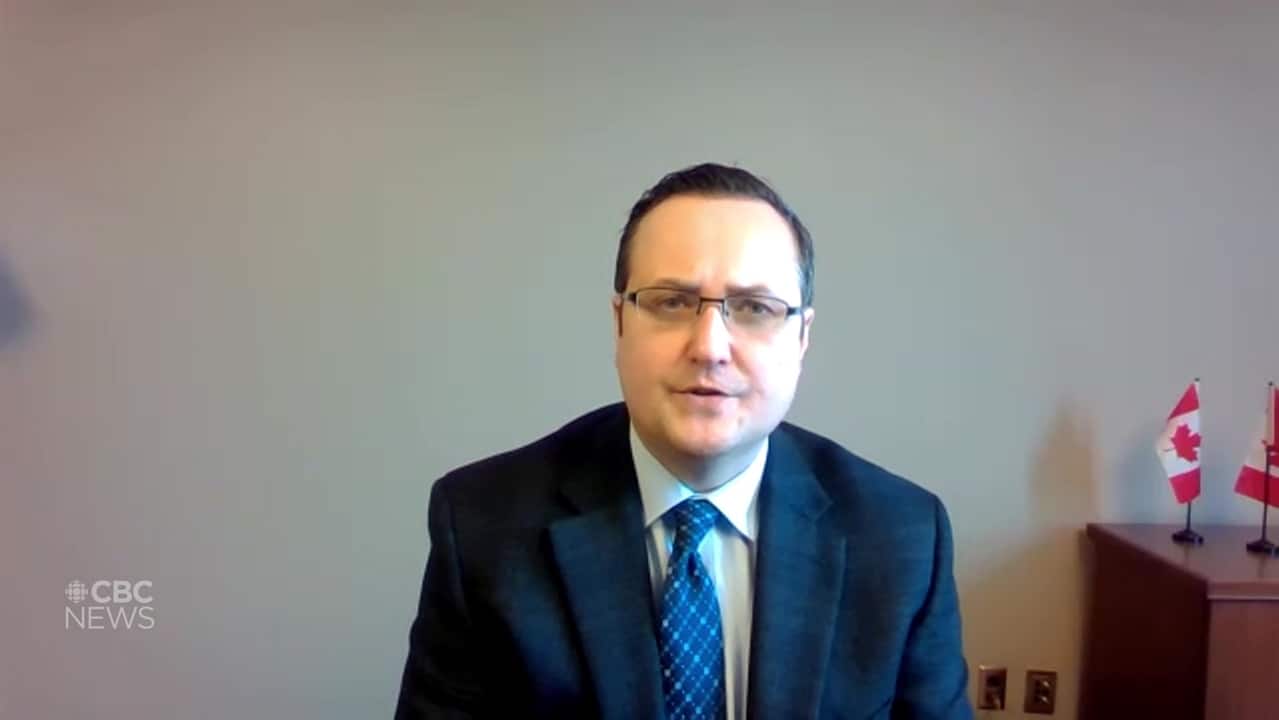 Kusmierczyk said the federal government is available for support, but since it’s a local issue, local authorities need to handle it.

According to Windsor Mayor Drew Dilkens, about $300 million worth of commercial traffic crosses the border in the city each day, including about 10,000 transport trucks using the Ambassador Bridge. 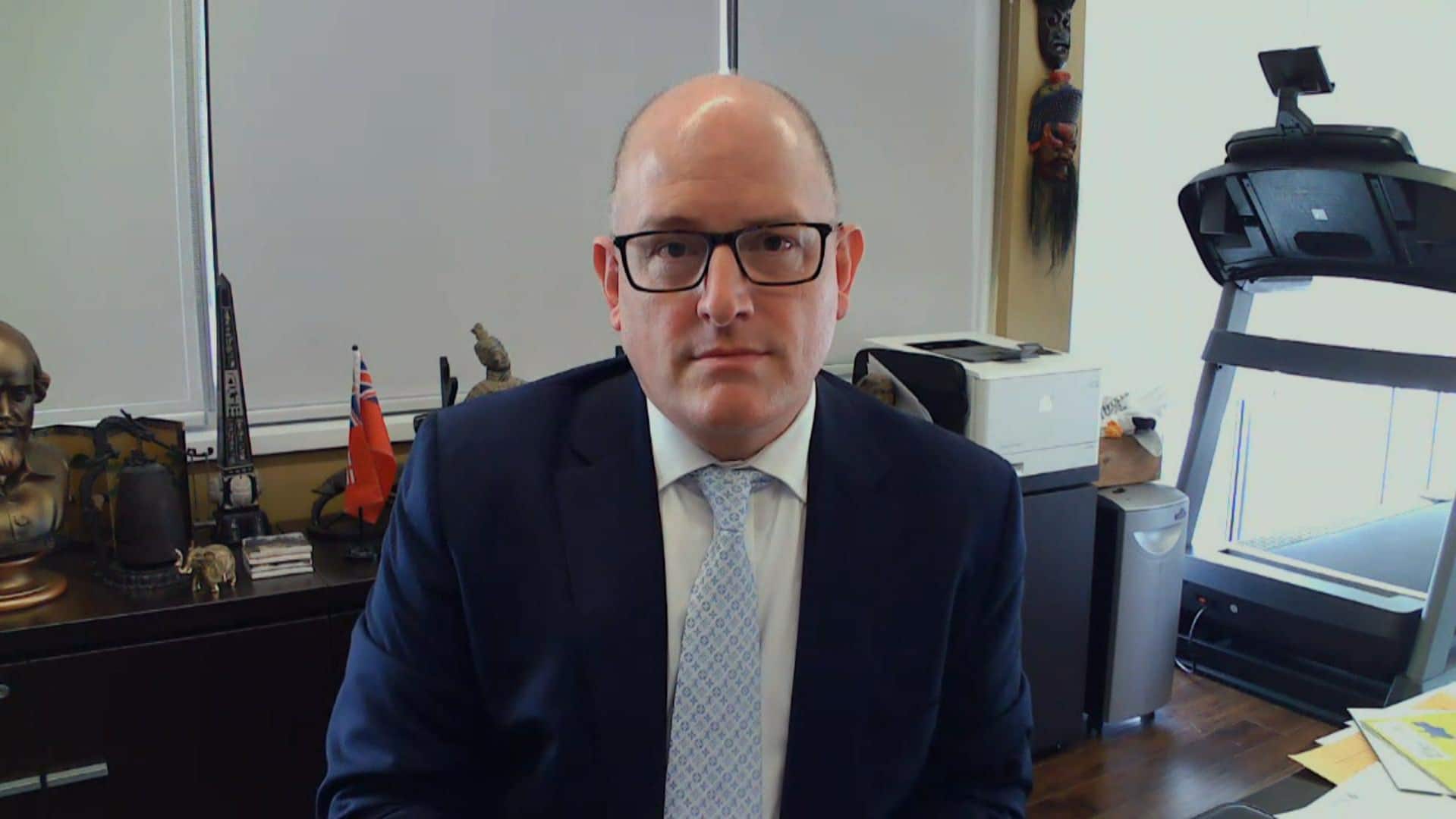 The Ambassador Bridge is Canada’s busiest international border crossing, says Windsor Mayor Drew Dilkens, and the protest that is largely shutting it down cannot be allowed to last long as the bridge is a ‘vital backbone to Canada’s economy.’ 6:39

“It is one thing to protest, and set up and be an annoyance in the streets of Ottawa, and another thing to come down and shut own the international border crossing where a large majority of Canadian trade flows,” Dilkens said to CBC News.

“The Windsor police are doing their best to work with the protesters, but I would submit that you have some folks who are making irrational decisions and you’re trying to find a sensible and rational solution, but you’re not working with rational actors in every case.” 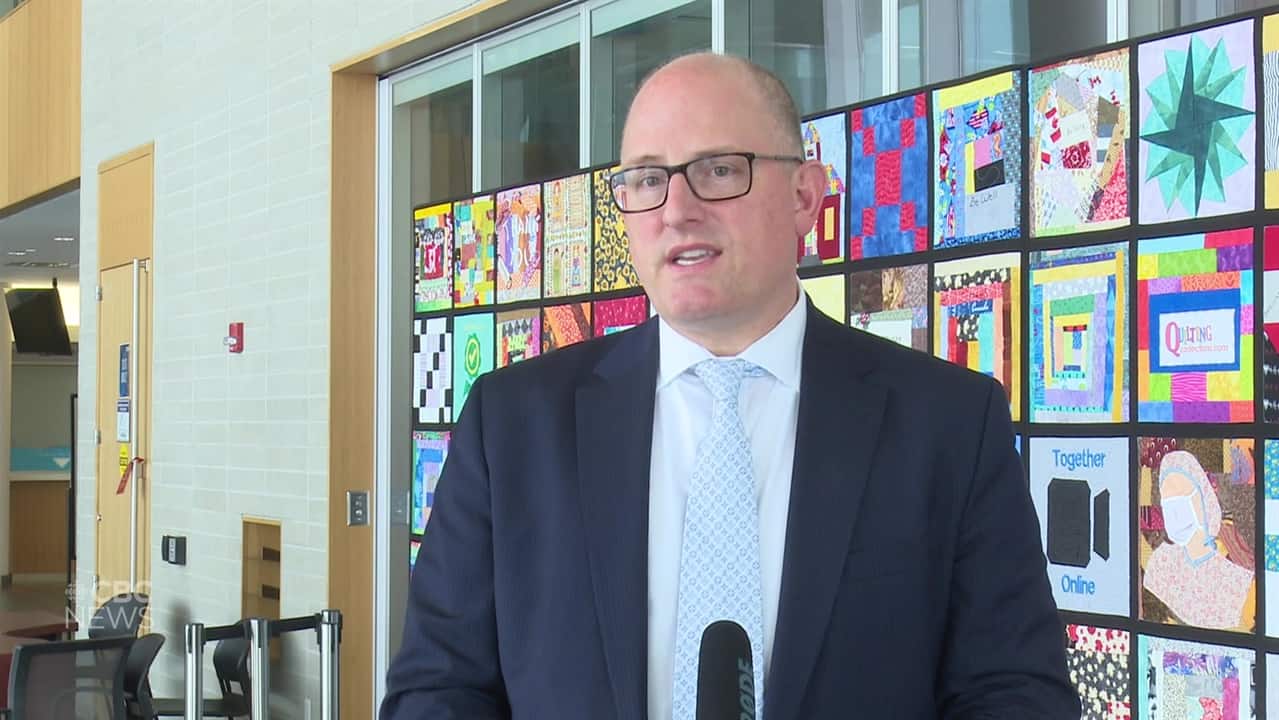 Windsor Mayor Drew Dilkens discusses the response to the ongoing protest at the Ambassador Bridge. 1:24

Dilkens said OPP are in the city, working with officials to try to negotiate with protesters to clear at least one lane of traffic to cross the bridge in both directions.

“We’re going to work through this, we’re going to be fair and reasonable to the extent we can be, but this cannot be allowed to continue very long.”

Minister of Emergency Preparedness Bill Blair and Public Safety Minister Marco Mendicino on Tuesday also gave an update on the situations in Windsor as well as Ottawa and Coutts, Alta., where there are similar protests.

“That [Ottawa] protest has gone well beyond lawful and peaceful, and is infringing on the rights of people,” said Blair.

“It’s one thing to protest, but when that protest infringes upon and impacts so significantly on the people of Ontario, I think it does require an appropriate response.”

Mendicino told reporters that additional supports have been provided at other Ontario crossings, including Blue Water, to help with an influx of travellers rerouted from Windsor.

“Doug Ford has had the power all along to tell the occupiers that if they don’t clear out, they won’t be licensed anymore,” NDP Leader Andrea Horwath said in a media release.

CBC News requested comment from Ford’s office about the situation in Windsor, but has not heard back.