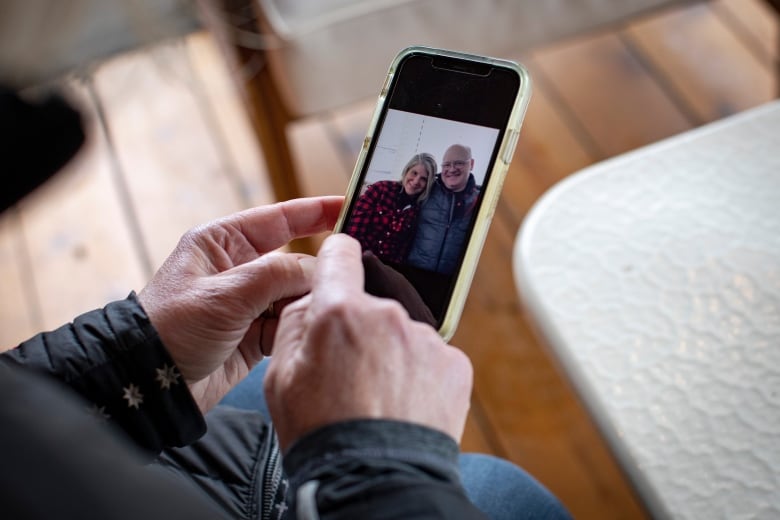 When Alison McVinnie’s husband, Kevin Crozier, suffered a massive stroke in February, he was transferred between three different hospitals, all in a matter of hours.

In a rapid bid to get him specialized care, the 54-year-old was admitted to the couple’s local hospital near Collingwood, Ont., then transferred to a larger facility 40 minutes away in nearby Barrie, Ont., before being airlifted to Sunnybrook Health Sciences Centre in Toronto for life-saving surgery.

Following that procedure, Crozier was sent back to Barrie’s Royal Victoria Hospital in late March to recover closer to home, ending his time bouncing around the province — or so McVinnie thought.

“You could just feel the vibe and the energy changing,” she said. “And things were getting stressful.”

Ontario’s COVID-19 admissions to critical care units were rising, and on April 9, the province announced an emergency order allowing hospitals to transfer patients without consent to help boost capacity in hard-hit facilities.

A little over a week later, McVinnie was notified that an unexpected fourth transfer for her husband was in the works.

Crozier wound up being sent to a hospital in Orillia, Ont., an hour’s drive from the couple’s home, forcing McVinnie to re-explain his situation to yet another medical team.

He has since battled secondary infections, including pneumonia and a pulmonary embolism, and started to struggle more to communicate. Despite not having COVID-19 himself, McVinnie said, her beloved husband wound up being “collateral damage” in the pandemic.

And she’s still not sure when he’ll return home — or if he’ll be shuttled somewhere else.

Since the start of this year, more than 2,000 patient transfers have taken place across the province, including many without consent, between regions hours apart — from Toronto to Ottawa to northern Ontario.

And while the move may be helping to boost hospital capacity in regions with surging COVID-19 cases, multiple Ontarians who spoke to CBC News said it’s also tearing families apart and taking an emotional toll on both patients’ loved ones and the health-care workers caring for them.

At Royal Victoria Hospital in Barrie, the last spot Crozier stayed before his latest transfer, pandemic pressures have grown intense this year.

The facility now has a field hospital on-site and had to transfer out at least 118 patients to other hospitals in recent months — mostly those requiring less-intensive care — to ensure there was bed capacity to care for patients coming from the Toronto area.

Since early December, more than 200 Toronto-area patients have been transferred in, and the majority were battling COVID-19, the hospital told CBC News.

“Moving the patient an hour up the road, or sometimes across the entire province, to get care, that distance is very tough on families,” said Dr. Chris Martin, head of Royal Victoria Hospital’s critical care team, adding it’s “stressful all around” for his staff as well.

Ornge, a non-profit air ambulance service operating in Ontario, has been instrumental in shuttling patients around the province in recent months — at staggering levels.

Since Jan. 1, Ornge’s team and local paramedics have completed at least 2,068 patient transfers tied to boosting critical care capacity, which doesn’t count the transfers being done for other non-pandemic reasons, the latest data shows.

The monthly tally went up month by month, with 1,133 patients transported in April alone during the peak of the province’s third wave.

Some of those people have been cared for on their journey by Ornge critical care paramedic Naomi Williams, who said she’s never experienced anything like the current surge of transfers in her 21 years on the job.

The trips can take hours, which often means Williams is working well into the evening or even past midnight. Even then, she said, it never feels like enough time to handle the constant load.

“It’s exhausting, to be honest,” she told CBC News. “We’re all working so hard right now. We’re working extra shifts to try to cover the demand.”

Sometimes, after loading critically ill, intubated patients onto a stretcher to prepare them for transport, Williams said, she sees their family members waiting near the ambulance bay, hoping to catch a first glimpse of their loved one since their admission.

Once the patient is on board, each transfer is filled with perilous moments where Williams is alone in the back of an ambulance, watching for any bump in the road that could disturb a fragile patient — including many who are now younger adults.

“I can’t believe the frequency and the sheer volume of people that need this kind of level of care,” she said.

In response to questions from CBC News, Ontario Ministry of Health spokesperson Anna Miller said provincial officials recognize that “this is a very difficult time and particularly distressing for people requiring hospital care.”

Ontario’s emergency order allows hospitals to transfer patients only when necessary, in response to a major surge of admissions and with an expectation of making reasonable efforts to transfers patients back to the original site or another suitable location, Miller said.

Brampton, Ont., resident Radhika Gandhi, whose father endured a transfer between hospitals before his death from COVID-19, said she hopes policy-makers learn lessons from the current capacity crunch before there’s ever another pandemic.

She said her father, Kanaiya, developed COVID-19 symptoms in late December after an outbreak at the factory where he worked. He was admitted to Brampton Civic Hospital, where Gandhi said it was easy building a relationship with her dad’s medical team.

“There was a doctor that spoke my dad’s mother tongue,” she said, “and they were able to speak to him in Gujarati before putting him on the ventilator.”

But to the family’s surprise, and despite Kanaiya being settled in so close to their home, the hospital later announced he was going to be transferred to another facility an hour away in Newmarket, Ont. After that move, he died on Feb. 4, at the age of 58.

“In the weeks following his transfer, he got a lot of secondary infections. So that really made me wonder, was it because of this transfer? If he had stayed at Brampton Civic, would this have happened?” Gandhi said.

“And there’s no evidence leading to that, saying that the transfer did anything. But you can only help but wonder.”

Speaking to CBC News at her rural home, a bright red house that’s meant to mimic the apples found in the orchard out front each fall, McVinnie said she was hoping to start a new chapter with Crozier at the property they’d just purchased last year — a compound where their kids can visit and where they could entertain friends in their golden years.

Now it feels empty without her husband, although McVinnie has been able to drive an hour each way to her husband’s hospital to visit him close to every day and keep an eye on his slow recovery. He’s communicating more, she said, and regaining his sense of humour.

Still, this latest transfer, she said, felt like “trauma on trauma.” And she knows her family isn’t alone.

“COVID has its own path that’s so destructive. But what’s happening where we are is we’re displacing people who also need medical care,” McVinnie said.