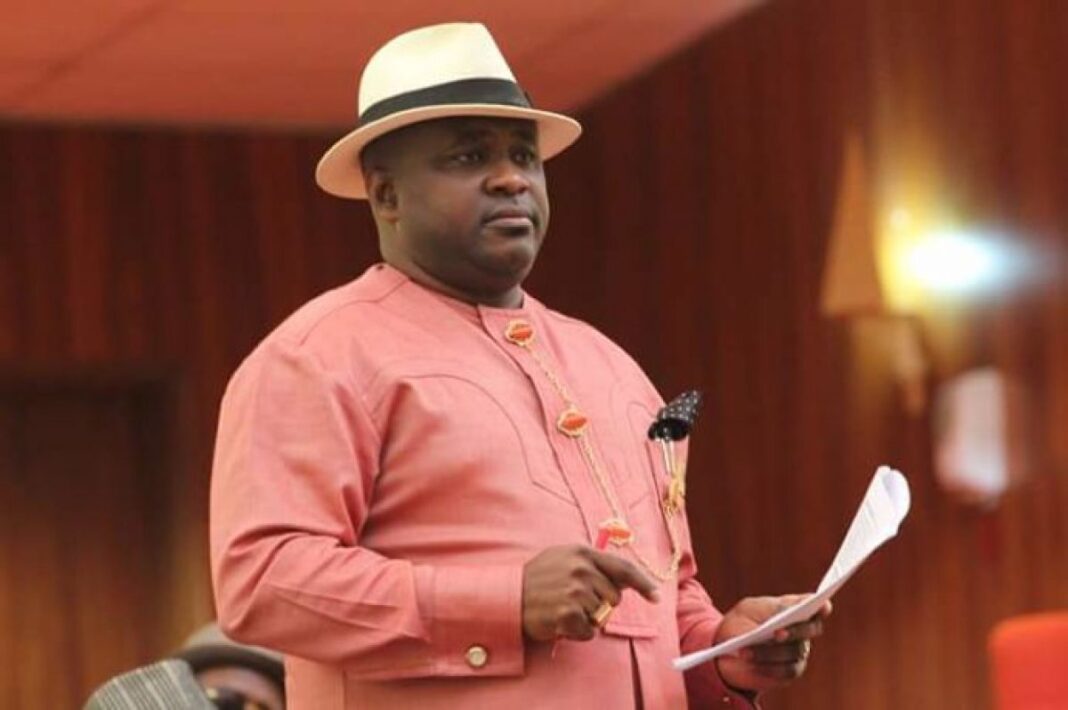 The Media Aide to Governor Udom Emmanuel of Akwa Ibom State, Reverend Richard Peters and the senator representing Akwa Ibom-North-East (Uyo) senatorial district at the National Assembly, Obong Bassey Albert, popularly known as OBA, have disagreed following the revelation by the governor of Rivers State, Nyesom Wike, that president Muhammadu Buhari had paid 13% derivation arrears since 1999 to all Governors of Niger Delta States.

Senator Akpan, who is the governorship candidate of the Young Progressives Party, YPP during a ward-to-ward campaign in East Itam, Itu Local Government of Akwa Ibom State, said Wike’s disclosure has validated his (OBA) exposition that Governor Emmanuel received N280 billion from the Federal government without accounting for it.

OBA at the ward campaign alleged that he was offered billions of naira to leave his governorship ambition and return to the senate but he rejected the offer.

He noted that the money was the proceeds from the state government’s share of 13 percent derivation arrears paid to Niger Delta States which amounted to N600bn already collected by the governor Udom Emmanuel-led administration.

He regretted that despite the huge sums of money received by the governor, the state has nothing to boast about.

His words, “When I said he (Udom) received N280 billion, they said it was politics. They said I was interested in finance, yes I will need Akwa Ibom money to empower the people of Akwa Ibom State as the next Governor…Thank God for Governor Nyesom Wike.

“What Udom has received is enough to develop Itu and Ibiono. All the funds that were not paid to South-South states from oil proceeds put together was $2.56 billion. The amount paid to Akwa Ibom was $1.1 billion (N600 billion). Udom has received over N3 trillion. But there is nothing to show for it. Out of that money they asked me to come and receive billions and go back to the Senate, I told them I don’t want it!”.

“I am aware that you are all hungry, but we will satisfy you. As you vote for me and other YPP candidates, your prosperity is coming…Gov. Wike has commissioned 12 flyovers, but our Governor struggled to build one. We should ask him to tell us what he is doing with our money. Today, our Government owes more than N36 billion in gratuities to our retired civil servants and primary school teachers”, he said.

However, Governor Emmanuel’s Media Aide, Peters in a press conference on Sunday described the allegations as ridiculous and defamatory.

In a statement tagged” Governor Emmanuel still saddling on Excellence” the Governor’s aide wondered why people would choose to condescend to defamation as a tool for political communication.

According to the statement, which read in parts, “This conference is necessitated by the current trend of insinuations cooked up by Senator Bassey Albert and his club of political gladiators against the person and personality of His Excellency, Governor Udom Emmanuel as well as his choice successor Pst. Umo Eno, in the build-up to 2023.

“While Governor Nyesom Wike of Rivers State may not be blamed for blowing his trumpet, his remarks on a certain amount of money received from the Federal Government remains questionable, as the specific day, month and year of the received sum was not mentioned. One could then see that the said money was not given recently.

“We have 36 states in Nigeria and each of these states have peculiar challenges, warranting cardinal promises made by their leaders. The question then should be: “has Governor Udom Emmanuel not fulfilled his promises to the people of the State? Is Governor Wike’s building of Flyovers to tackle the challenges of his people not equal to Governor Udom Emmanuel’s focus on Infrastructure, Industries, health, security etc which has equally tackled our peculiar challenges?

“Daily, the State Government has been giving updates and reports on projects executed. The Governor publishes the statement of account periodically in line with World Bank’s State fiscal Transparency, accountability and sustainability program which the State adopted.

“We have it on record that a total of 220 internal roads have been constructed in this state by this present administration. Out of the 220 roads, 114 have been completed and commissioned. We have about 5,000 projects in our schools, hospitals have been reconstructed across the federal constituencies, to mention but a few. Do these projects run on water or blood?

“The present government upon assumption of office in 2015 paid the backlog of pensions and gratuity owed civil servants. How come no one is talking about that? On IBB lies the multi-billion naira flood control project massively planted by government to control erosion and flooding. Who knows what the fate of communities around the axis would have been without the world bank partnership project? Yet, we see this as a mean feat?