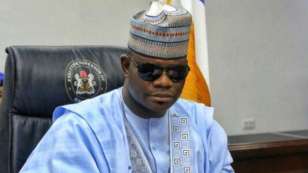 Kogi Gov Yahaya Bello has been criticized for running the affairs of the State poorly.

In this piece, University lecturer Oguche James says Kogi Governor Yahaya Bello is being criticized because he’s decided to plug loopholes in the State.

On Saturday, January 27, 2018, Governor Yahaya Bello of Kogi State marked his second year in office. It was a low key celebration. Indeed, the number one citizen of the Confluence State specifically directed his supporters, family and friends and top government officials not to place adverts nor mark the occasion with the usual fanfare associated with such anniversaries.

Consequently, the day was marked as a solemn anniversary. The only exception were prayers held in churches and mosques for the administration and the governor. The day was also used for sober reflection and to assess two years of Governor Bello on the saddle.

Reasons for the low key celebration were obvious. First was the recognition by the governor that recession had compelled many below the accepted below level. Secondly are the unresolved problems inherited from the last administration which include backlog of unpaid salaries, debt profile, ghost workers syndrome, etc, all of which have placed a huge burden on the government and the citizenry.

However, the day was not without the usual tantrums and throwing of brickbats, by the opposition and self styled public commentators. These elements saw the day as an opportunity to further attack the government and spared no efforts in doing so.

Even though the next governorship election in the state is faraway in 2020, the vitriols that accompanied commentaries and speeches by opposition figures and groups suggest that the poll was very close.

Why has it been so difficult for the opposition to give Yahaya Bello the benefit of the doubt? Why have they refused to accept the verdict of the courts, including the Supreme Court that the governor was duly elected and therefore allow the administration to do the job it was elected to do?

Why have some so called leaders in the state made Bello-bashing a regular past time? Why have some sections of the state vowed not to relent in their attacks until Bello is ousted from office?

The truth is that Governor Bello actually murdered sleep the day he emerged the candidate of the All Progressives Congress (APC) and was subsequently elected to rule Kogi State.

Of course, it is common knowledge that he caused an upset to the apple cart. Many did not know how far reaching and significant his emergence was to the political structure of the state.

Of course, no one gave Yahaya Bello a chance in 2014/2016 when he indicated interest to run for the governorship ticket. Neither the opposition Peoples Democratic Party (PDP) which was in power at that time, nor his party, the APC, gave him a chance. That is, talking about the powers that be at the time.

It was not a case of Bello being not eminently qualified for the job of governor. He was. But there was the unspoken rule.

There was a structured gang up which ensured that the young people, though a vital link in the tripod that holds the state, were permanently shut out of Lugard  House, the seat of power. The gang up was by a small clique of the older generation of the Igala , Igbirra and the Yoruba (Okun) people, which made up the other three legs in the tripod.

The understanding was that, there was definitely no chance for the youths as far as the unspoken rule existed. Indeed, the best that they could aspire to was to be councilors or members  of the house of assembly.

The positions of governor and deputy governor were considered exclusive preserve of the old people who have to be anointed by the so-called elders led by a former accidental governor of the state. And no one anticipated a shift from this long held belief of who gets what in Kogi state. But, Yahaya Bello shattered the ceiling when he became governor January 27, 2016.

Therefore, it is not surprising that some ethnic jingoists who feel the governorship seat is the exclusive preserve of the Igalas in Kogi East and the so called protectors of the status quo have been fighting tooth and nail to regain their lost crown. So, it is fool hardy to expect that they would desist from their retrogressive paths at a time when the world is moving away from such mundane and primordial considerations. Bello-bashing for these people is about ethnic pride and his age.

Similarly, it must be stated that Yahaya Bello murdered sleep the day he took the decision to go after ghost workers, thereby getting rid of non fictitious names in the pay roll as well as cases of persons collecting more than one salary from government.

It does not matter that over 18,000 ghost workers have so far been identified with the state saving almost N4billion in the process. Neither does it matter that money saved are being deployed to other meaningful areas.

Who were those involved in the ghost worker syndrome? Previous governments at the state and local councils; top government functionaries, permanent secretaries and so called party leaders. They all conspired to steal from the public treasury by injecting fictitious and non-existing names in the payroll using their wives, children, other relatives and mistresses as conduit for achieving their heinous objective.

That Yahaya Bello has taken food from their filthy mouths explains why for these set of people he could do no good. No matter how laudable his projects are, Governor Bello would continue to be harangued, of course using the media as surrogate.

But of course, the reality is the opposite as actual public opinion shows that the man is really loved by the people.

More importantly is the fact that the governor has no known godfather in the state. Instead, he has thrown the doors open, and preferring to consult widely before making his stance on any issue public. Again, that means the era of sharing public funds with a cabal is over.

Do we expect those who had benefitted from the sleaze in the past and have been rendered redundant to simply fold their hands and not fight back? What of contractors whose stock in trade is to abandon projects after sharing part of the money paid to them with the governor? Will they be happy now that Kogi has a man who would not share money with them but insists on full value for money paid?

The truth is that Yahaya Bello stirred the hornet’s nest and stepped on toes as soon as he was sworn in as governor on January 27, 2016. It is also understandable that efforts had been made, and are still been made to pull down his government.

Clandestine meetings are daily been held to ensure he does not return for a second term. That’s to understand how desperate and offended these nefarious groups and individuals are. Truly, the governor murdered sleep two years ago and he should not expect the seat of power to be a bed of roses.

Thankfully, the man seems to understand what he is up against. This explains why he has continued to forge on despite all odds. Indeed, Kogi has made remarkable progress under his watch to the consternation of those who predicted failure at the inception of the regime. Visitors and residents have continued to applaud the significant achievements in the state in spite of dwindling resources.

By and large, Bello’s traducers may have to come to the reality that the man is unwavering in his determination to rescue Kogi and take it to the next level. No amount of opposition could distract or deter him from achieving the set objective. And as people reflect on the fate of the state for the next two years, it’s about time to give the governor kudos and rally behind him for the good of all.