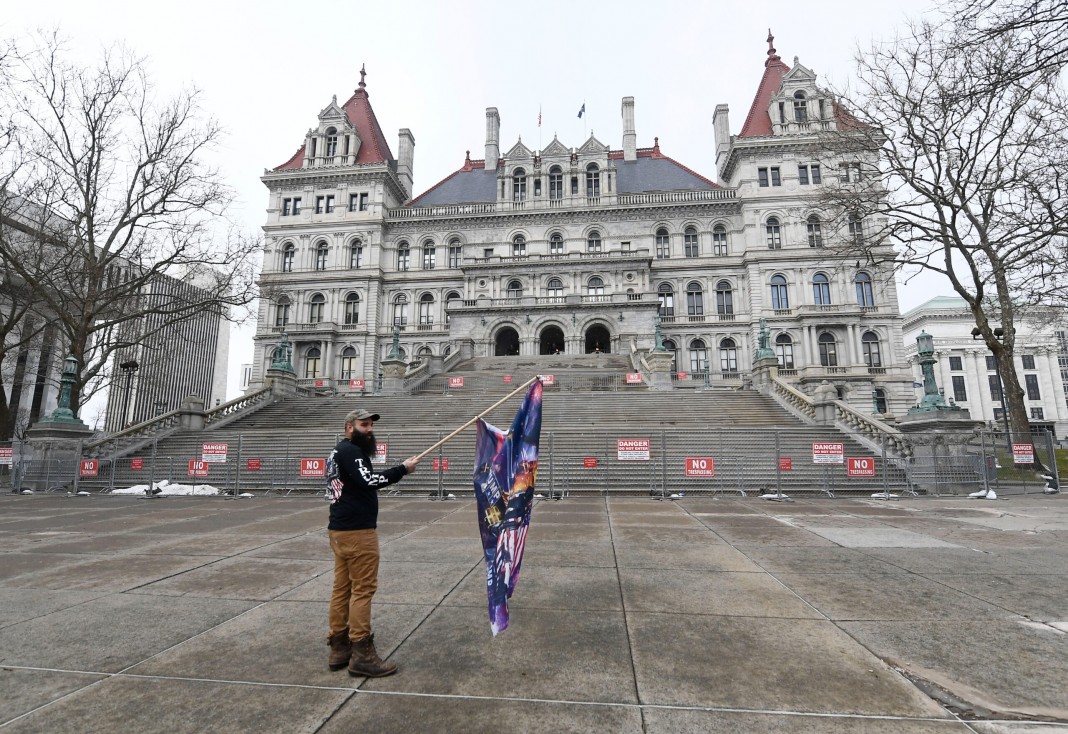 State officials beefed up security at capitols around the nation for Inauguration Day, bracing for the possibility of violent protests after the deadly insurrection in Washington D.C. by supporters of former President Donald Trump earlier this month.

But for the most part, the demonstrations that occurred while President Joe Biden took the oath of office were low-key affairs, including a few where just a single Trump supporter showed up, as was the case outside the New York State Capitol in Albany.

“I wanted to be part of the Patriot Party, join supporters of Trump, y’know?” Mark Leggiero told NBC News. “I find myself kind of by myself out here.”

“I was hoping that we’d have more supporters out here,” he told NBC.

Leggiero was alone in Albany, but he wasn’t alone in spirit. Tiny Trump rallies – some as small as a single person – broke out around the nation, including this guy at the California State Capitol in Sacramento:

At the State Capitol in Sacramento, a lone Trump supporter wearing a red MAGA hat protested as President Biden took the oath of office Wednesday.

A pro-Trump protest by the Nevada State Capitol in Carson City drew twice as many demonstrators:

The scene just outside Nevada’s capitol complex in Carson City ~ half hour until the Biden’s inauguration kicks off. So far, just two older guys – Brandon and Matt – with signsflags who are frustrated that more people have not showed up. pic.twitter.com/rq2P0opYcs

There was also a tiny demonstration at the Washington State Capitol in Olympia:

Elie Mystal of The Nation compiled some other examples into a Twitter thread, including these:

Even @SenatorCollins said: “No. This man doesn’t concern even me.”https://t.co/s6yvWLZbRO

Somewhere, a Hooters in Tennessee is missing one of its regulars. https://t.co/p0ECp4YXcJ