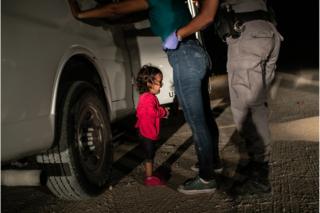 The winners of the World Press Photo 2019 contest have been announced, selected from over 78,000 photos taken by 4,738 photographers.

Warning: contains images that some may find distressing.

The winning image is by John Moore showing Honduran toddler Yanela Sanchez crying as she and her mother, Sandra Sanchez, are taken into custody by US border officials in McAllen, Texas, USA.

The photo was taken in June 2018 and is entitled Crying Girl on the Border.

Moore, a senior staff photographer for Getty Images, said: “I think this image touched many people’s hearts, as it did mine, because it humanises a larger story.

“When you see Yanela’s face, and she is more than two years old now, you really see the humanity and the fear of making such a long journey and crossing a border in the dead of night.”

After the photo was seen all around the world, US Customs and Border Protection confirmed that Yanela and her mother had not been among the thousands who had been separated by US officials.

But public outcry over the controversial practice resulted in President Donald Trump reversing the policy on 20 June.

Five other photos were nominated as finalists in the contest, seen below.

The people of Eastern Ghouta had been under siege by government forces for five years.

Akashinga – the Brave Ones, by Brent Stirton

Akashinga, meaning the brave ones, is a ranger force established as an alternative conservation model, which aims to work with, rather than against local populations, for the long-term benefits of their communities and the environment.

The Disappearance of Jamal Khashoggi, by Chris McGrath

A critic of the Saudi regime, journalist Jamal Khashoggi went missing after entering the Saudi Arabian Consulate in Istanbul, Turkey, on 2 October, 2018.

After weeks of false information, Saudi Arabia announced that Mr Khashoggi had been killed accidentally during a fight. Turkish authorities and the CIA claimed he had been murdered by Saudi intelligence operatives.

Chris McGrath’s photo shows an unidentified man trying to hold back the press as Saudi investigators arrive at the Saudi Arabian Consulate in Istanbul on 15 October.

Being Pregnant After FARC Child-Bearing Ban, by Catalina Martin-Chico

Yorladis’ previous pregnancies were terminated during her years as a guerrilla for the Revolutionary Armed Forces of Colombia (FARC), Colombia’s largest rebel group.

Pregnancy was thought to be incompatible with guerrilla life and women were obliged to leave babies with relatives or, some say, have forced abortions – a charge which FARC denies.

Since the signing of a peace agreement between the Colombian government and the FARC rebel movement in 2016, there has been a baby boom among former female guerrillas.

Marco Gualazzini captured a shot of an orphaned boy in Bol, Chad, walking past a wall with drawings depicting rocket-propelled grenade launchers.

The image is part of the documentation of the humanitarian crisis in the Chad Basin, caused by a combination of political conflict and environmental factors.

Lake Chad, once one of Africa’s largest lakes and a lifeline to 40 million people, is experiencing massive desertification, shrinking by nine-tenths due to climate change, population growth and irrigation.

In another category, Pieter Ten Hoopen won the World Press Photo Story of the Year award for his series entitled The Migrant Caravan.

Hoopen documented a group of migrants in October and November 2018 travelling to the US border from Honduras, Nicaragua, El Salvador and Guatemala.

In this image, a father and son are sleeping in Juchitán after a long day of walking.

Hoopen photographed families bathing, washing clothes and relaxing beside the Rio Novillero, while the caravan took a day to rest near Tapanatepec, Mexico.

A girl picks flowers during a walk from Tapanatepec to Niltepec, a distance of 50km (31 miles).

Here is a selection of other nominees and winners from this year’s contest.

The winners and finalists can be seen in a touring exhibition, which opened in Amsterdam on 13th April.

You can view the full set of prize-winning images at www.worldpressphoto.org. 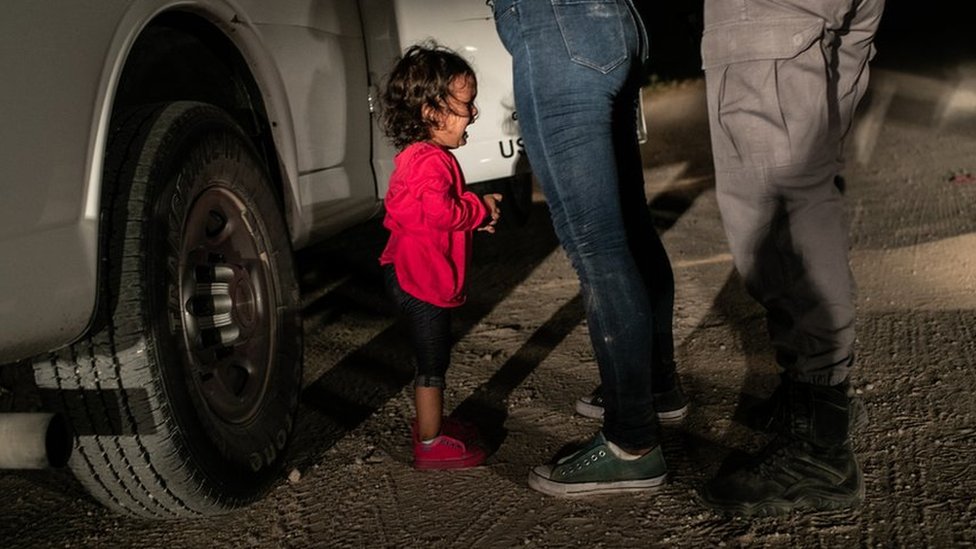