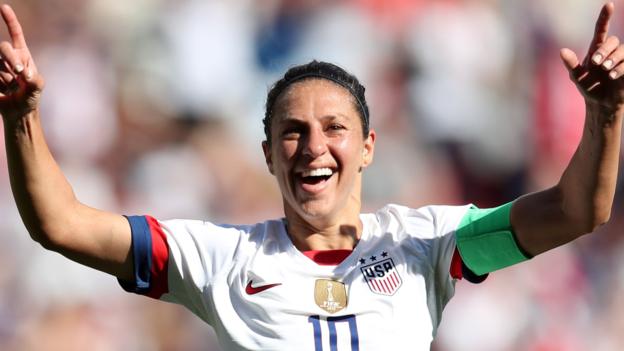 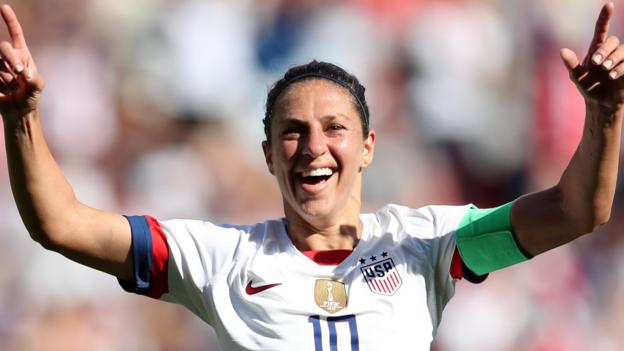 The United States easily reached the last 16 of the Women’s World Cup as they produced another commanding display to beat Chile in Paris.

Having opened their campaign with a ruthless, record-breaking 13-0 win over Thailand on Tuesday, the USA quickly got on top of Chile and led early on through veteran Carli Lloyd’s crisp finish.

Julie Ertz and Lloyd then both headed in from first-half corners, before Chile keeper Christiane Endler pulled off several stunning second-half saves to prevent the holders adding to their lead.

The world’s number-one side, who rested seven players, also hit the woodwork three times before Lloyd dragged wide from the penalty spot, missing the chance to become the oldest player to score a World Cup hat-trick.

A draw with rivals Sweden in Le Havre on Thursday would be enough for this confident USA outfit to top the group on goal difference, following the Swedes’ 5-1 win over Thailand earlier on Sunday.

Chile, who are playing in their first World Cup and remain winless in 2019, must now beat Thailand to have any hope of progressing to the knockout stages as one of the four best third-placed sides.

The USA, who are bidding to win this competition for a record fourth time, have lost just once since 2017 and again outlined why there are the favourites to defend their title by winning the final in Lyon on 7 July.

Jill Ellis rotated her team significantly, but with such strength in depth, they were no less dominant over the 2018 Copa America runners-up and went in 3-0 up at half-time for the second game running.

Lloyd, who wrote herself into legend with a treble in the 2015 final, became the first player to score in six consecutive Women’s World Cup games but was unable to complete another historic hat-trick.

She had her chance late on, but placed wide with a penalty awarded controversially on a pitchside VAR review for a foul right on the edge of the area, when the offence appeared to start outside the box.

The USA spent almost the entire game playing in Chile’s half and hit the woodwork twice through Lloyd and once through substitute Jessica McDonald’s long-range effort, as they again impressed with a confident display of classy football.

Chile, who are ranked 39th in the world, have just 727 registered players, so were always likely to struggle against a nation boasting 1.6m female footballers

Thankfully for the South Americans, one of those 727 is their brilliant goalkeeper Endler, who starred at her club team’s home ground.

The Paris St-Germain stopper – who also shone in their opening loss to Sweden – defiantly produced several superb saves in an astonishing second-half performance to prevent the USA from chasing down a similar margin of victory that they enjoyed over Thailand.

In particular, her reaction stop from a sweet Christen Press volley brought a stunned crowd to their feet, while her dive to claw away a Press header was described by BBC commentator Jonathan Pearce as “one of the best saves at a Women’s World Cup”. Unsurprisingly, Ender topped the BBC player rater with a mark of 9.31.

Jose Letelier’s side – who have never scored against the USA – rarely attacked but did momentarily celebrate what he thought was an equaliser in the first half, as USA keeper Alyssa Naeher misjudged a free-kick and the ball found the net, but Carla Guerrero was offside.

USA boss Jill Ellis: “The fact that she’s (Carli Lloyd) now scored three goals, I don’t think she could be in a better spot (to start). I also know she’s ready to do whatever she needs to for the team.

“Christiane Endler was fantastic, we were aware of her skill, she’s a world-class goalkeeper. I thought their spirit was magnificent, total credit to Chile. We knew Endler was always going to keep them in the mix.”

Chile goalkeeper Christiane Endler: “I’m sad for the defeat, but happy for my performance.

“I prepared intensely this last year to come to the World Cup and perform to the best of my ability. It’s a mix of feelings, but I’m satisfied to have played like this, especially here, at this stadium that’s my home.

“The football world powers (USA) have years of advantage compared to us in the development and support of women’s football. Our league in Chile is still amateur and many of our players have had to leave the country to play professionally. Despite the result, being here is a real accomplishment for us.

“This must be the beginning of something bigger and more important so more girls can dedicate themselves to the game professionally.”