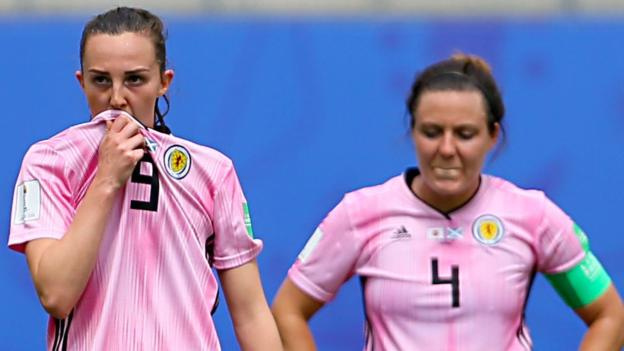 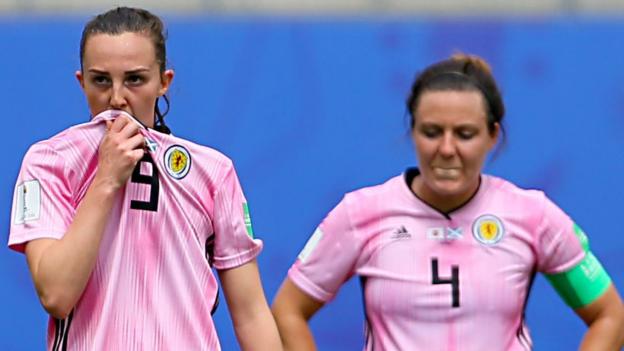 Scotland’s chances of qualifying from their Women’s World Cup group hang by a thread after defeat by Japan.

Shelley Kerr’s side had rarely been out of their own half by the time Mana Iwabuchi blasted a shot past goalkeeper Lee Alexander after 22 minutes.

With Japan dominating, Rachel Corsie was ruled to have hauled down Yuika Sugasawa and the striker sent the spot-kick low into the corner.

But consecutive 2-1 defeats leave Kerr’s side bottom of the table without a point and needing to beat Argentina in their final game if they are to have a chance of making the knockout stage as one of the four best third-placed sides.

For former world champions Japan, who opened with a disappointing draw, it ends a run of five games without a victory and they top the group with four points ahead of the evening game between England and Argentina in Le Havre.

There is no doubt that Japan, ranked 13 places above Scotland at seven in the world, deserved their victory at Stade de la Route de Lorient in Rennes, but Kerr’s side were left to rue another insipid first half and three penalty decisions that went against them.

The Scotland head coach obviously had a gameplan in mind to beat the Japanese, with her starting XI showing four changes from the one that lost to England, including the dropping of winger Claire Emslie to the bench despite her goal in the opener.

Scotland were looking to be more of a threat up front, having restored top goalscorer Jane Ross, but Japan coach Asako Takakura had different ideas.

Having been criticised for Japan’s own lack of attacking intent in their opening goalless draw with Argentina, Takakura made three changes, including fielding an extra forward.

It was Scotland’s turn to look passive. There was a lack of tempo, imagination, movement, belief and, strangely, determination, with the likes of Kim Little and Erin Cuthbert looking far short of their world-class reputations.

Japan had already been knocking on the door by the time Alexander looked slow to react as Iwabuchi – the forward handed a start after impressing as a substitute against Argentina – fired straight through the goalkeeper high into the net following a poor headed clearance from Corsie.

Their high press was forcing Scotland into aimless long balls forward, while their tiki-taka football was leaving their opponents looking disheartened and bewildered.

Rather than being Scotland’s creative force, Little’s biggest contribution was to head a Saki Kumagai header off the line after Alexander made a mess of coming for a cross.

When Sugasawa crumpled dramatically to the ground, it looked like a soft penalty award, but the video assistant referees agreed with referee Lidya Tafesse’s view that Corsie’s ill-advised hand on the striker’s shoulder was enough to award the spot kick.

It took 41 minutes for Scotland to threaten through Cuthbert’s 20-yard drive on to the roof of the net, while Japan went close to going into the break three ahead when Hina Sugita found the face of the crossbar.

As against England, it was only in the last 15 minutes, having thrown caution to the wind and having introduced Emslie then Clelland, that Scotland began to look like a side deserving of a place at the World Cup finals.

Cuthbert found the outside of a post from close range and looked to be clipped from behind by Sugita only for the officials to ignore Scottish pleas.

Lisa Evans had a shot pushed wide by goalkeeper Ayaka Yamashita before another cry for a penalty failed to even win a VAR review after Risa Shimizu looked to halt Cuthbert’s progress with a hand ball.

Scottish pressure eventually told when Clelland gathered Nana Ichise’s poor pass across the face of her own goal and produced a sublime finish from 18 yards, but the two minutes remaining quickly passed without an equaliser.

Claire Emslie topped our Player Rater as voted by the public. However, while the Scotland winger did make a big difference after coming on as a substitute with 30 minutes remaining, it would be churlish to suggest she outshone anyone in the blue jerseys that dominated the majority of the match.

With her 21st international goal, Japan forward Mana Iwabuchi not only set the tone with her fine finish but was the lynchpin of intricate passing that constantly had the Scots defence chasing shadows.

Scotland are left hoping that Argentina do not spring a surprise win over England on Friday evening.

If they do, Kerr’s side would be left hoping that England also lose to Japan while the Scots beat Argentina in their final group games, which kick-off at 20:00 BST on Wednesday, if they are to have a chance of going through on goal difference.