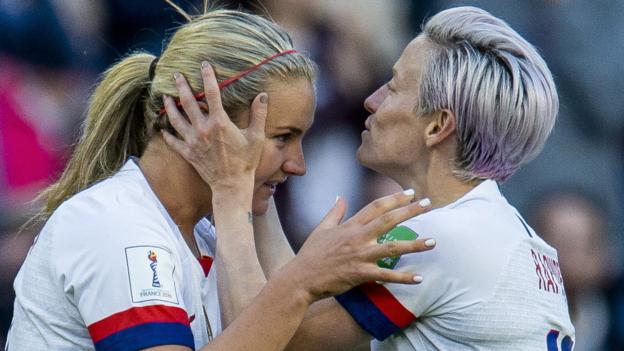 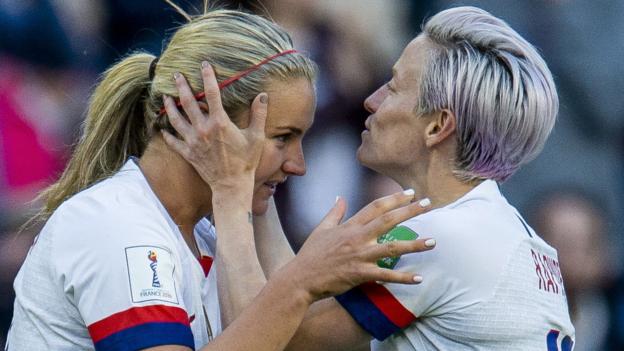 The United States continued their impressive start to their Women’s World Cup title defence as they beat rivals Sweden to top Group F.

Both sides were already assured of their places in the last 16, but the USA added to their 13-0 and 3-0 wins over Thailand and Chile with another strong performance in Le Havre.

Unmarked midfielder Lindsey Horan poked in the opener from an early corner, before Tobin Heath’s strike deflected in off Chelsea defender Jonna Andersson as the USA added a controversial second after the break.

Jill Ellis’ side face Spain in the next round while Sweden meet Canada, with both of those matches to be played on Monday.

Andersson’s own goal came amid yet another debatable intervention involving VAR at this tournament, eventually being given despite USA substitute Carli Lloyd being in an offside position in the middle when the cross was played in.

Lloyd did not touch the ball, so was deemed not to have been interfering with play after a lengthy stoppage for the review, but her presence clearly affected Linda Sembrant’s attempt to hook the cross clear, which diverted the ball towards Heath.

USA continue to lay down marker

Nevertheless, the USA were worthy of their two-goal advantage and they could have added a late third but Lloyd was denied by Hedvig Lindahl’s low save.

The three-time winners began the game at a rapid pace, looking sharper and livelier than the Swedes, who arguably allowed the holders too much room in the first half.

The world’s top-ranked side had made seven changes, but they had rotated their squad for Sunday’s win over Chile and therefore returned to something closer to their first-choice XI.

But they showed their pace, power and fitness with another good display, despite showing some very slight potential weaknesses in defence for the first time in the tournament.

Their 18 goals in the group stage is a new record for the Women’s World Cup and – having also kept three clean sheets – they will have sent a strong message to their rivals that they mean business and remain the favourites.

The only down side to the USA’s night was an injury to striker Alex Morgan, who failed to emerge for the second period after suffering a knock in the first half.

Boss Jill Ellis said taking the tournament’s joint-top scorer off “was a case of ‘let’s be smart about this'”.

Historically, Sweden have often proved to be a tricky opponent for the USA, coming out on top in two of their past four meetings, including a 0-0 draw in the group stages of the 2015 World Cup.

In particular, during the build-up to Thursday’s hotly anticipated game – watched by 22,418 in Le Havre – much of the talk in the US media had been concerning the idea of Ellis’ team gaining some form of revenge after their loss to the Swedes on penalties in the quarter-finals of the 2016 Olympics.

But Peter Gerhardsson also made seven changes to his side following their win over Thailand and they were second best against the world champions.

They did create some decent chances, but Stina Blackstenius flicked a second-half header over, after Kosovare Asllani fired a shot straight at the goalkeeper before the break.

Gerhardsson played down the changes to his side, insisting that qualification was all that mattered and not whether they finished first or second.

“We knew who was 100% and we knew we had a new match on Monday which is a knockout match, and that’s the most important one,” he said.

“We didn’t think in advance that it was important to end up first or second in the group. We knew it was Spain, Canada or the Netherlands.

“Monday is the most important match, so that was number one to me, when I picked my line-up.

“We wanted to win this match as well and there are a number of factors you need to consider. It’s really not something that I feel I need to explain. I’d rather take your criticism for this rather than revealing everything.”

“For me, Carli Lloyd is in an offside position. It affects the defender’s decision making to play the ball and in the second phase they score.

“So she has to be offside. As a centre-back this infuriates me. Linda Sembrant has to play the ball because of Lloyd’s run in behind.

“Carli Lloyd is offside and that is just wrong. If it impacts the defender’s decision to play the ball, it has to be classed as offside.

“You are going to have all sorts of problems here. The defender might think ‘I’ll leave the ball so the referee has to call her offside’. But in league games we don’t have VAR so the defenders have to defend that ball.

Ex-USA goalkeeper Hope Solo:“There are two defenders on Carli Lloyd which is effectively why Tobin Heath got the opportunity on goal.

“She changed what she was going to do with the ball. If Carli Lloyd wasn’t there, she could have taken the ball down. But she had to make a decision because Lloyd was there and in an offside position.”

The USA will face Spain in Reims on Monday (17:00 BST), at the same ground where they demolished Thailand 13-0. The Spaniards finished second in Group B, behind Germany, and the stars and stripes will be the strong favourites for the tie.