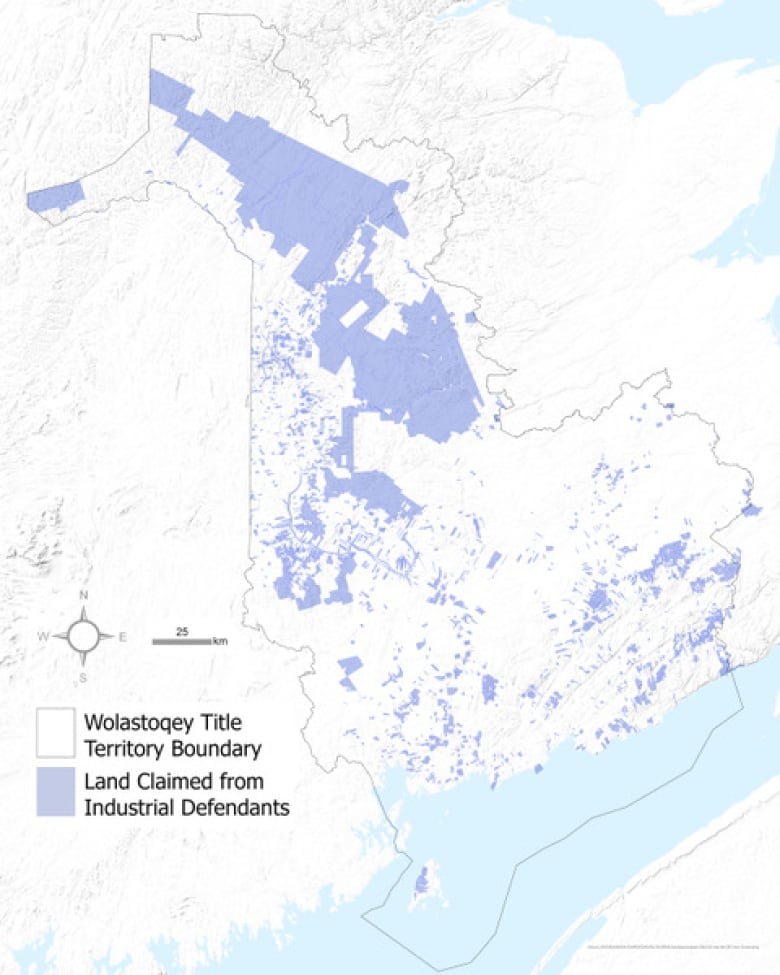 Wolastoqey chiefs in New Brunswick are shifting their Aboriginal title claim case to pursue the province’s largest forestry companies in a bid to reclaim title to much of their traditional territory.

The six chiefs have amended the legal claim they filed last year to add J.D. Irving Ltd. and its subsidiaries, Twin Rivers Paper, the A.V. Group, Acadian Timber and H.J. Crabbe and Sons.

They say the companies operate on about 20 per cent of the more than five million hectares the chiefs identify as Wolastoqey traditional lands in New Brunswick.

“They are the largest landowners in New Brunswick, and they have had a history of getting land from the province without paying a fair price for it,” Chief Patricia Bernard of the Wolastoqey Nation of Matawaskiye (Madawaska) said at a news conference.

“That is our land that the province gave away for a song. We want back what is ours, that was never theirs to give.”

The change to the lawsuit puts the legal action on two tracks, seeking compensation from governments for the loss of some parts of the territory, but claiming ownership of the parts used by industry.

“Aboriginal title on the traditional lands … does not seek to displace regular New Brunswickers from their homes and farms,” the chiefs say in a news release.

But winning clear recognition of title for land used by industry would make the Wolastoqey landlords and give them final say in how the companies harvest wood there. They would also be able to receive some or all of the royalties that now go to government.

A ruling in favour of the Wolastoqey Nation would allow forestry to continue, said the release, “as long as corporations had an agreement with the Nation over activities on their land.”

“It would be premature for Forest NB to make a comment at this time, until members have had time to review the material,” said executive director Kim Allen.

J.D. Irving Ltd. spokesperson Anne McInerney said in a statement, “Given this is before the courts, we’ll refrain from commenting.”

Premier Blaine Higgs said he hadn’t had a chance to review the new claim and wouldn’t comment on its possible impact.

But he said he welcomed the court case as the best option to resolve longstanding disputes over Indigenous rights.

“For a long time we’ve been questioning back and forth, who’s responsible for what, what the obligations are,” he said.

“If we’re going to have real truth and reconciliation going forward on all issues, we need to understand exactly what our obligations are. … It seems that’s only going to be accomplished through a legal process.”

The chiefs say the case could take a decade or more to go through the courts, so it’s too early to say what kind of forest management system they might put in place if they win.

But they say getting a share of the revenue from harvesting is overdue.

“These are our resources. They were never ceded through treaty and we’re not the ones generating wealth off them,” said Chief Ross Perley of Wolastoqey Nation at Neqotkuk, also known as Tobique First Nation.

“Companies in the province have been accumulating wealth from our resources for the last hundred years. We feel that it’s our turn to get our share of wealth and make our communities sustainable.”

N.B. Power is also named in the claim — the only non-forestry industry player identified. In the utility’s case, the Wolastoqey First Nations could claim revenue from its generation and sales of electricity.

The new claim replaces the one filed last year. The new version keeps the federal and New Brunswick governments as defendants.

At the time Attorney-General Ted Flemming said the acknowledgements might compromise the province’s position in the land-claim case and implied that the Wolastoqiyik wanted to take back all of their traditional territory.

Bernard called that “clearly an attempt to deceive and create fear amongst New Brunswickers.”

She said that’s why the claim has been amended to make clear “the rights of everyday New Brunswickers will not be impacted” by the claim.

Higgs said he would wait to see if the new filing says that before commenting. “I don’t know if it’s in there or not in that regard, but I guess we’ll find out.”

Opposition Liberal leader Roger Melanson said the government should be trying to resolve the title claim by working with the chiefs.

“I think any government would want to avoid any legal challenge or legal process.”

The claim is based on Peace and Friendship treaties signed by the Wolastoqiyik and the British Crown between 1725 and 1778.

The chiefs say those agreements did not provide for the surrender of any land.