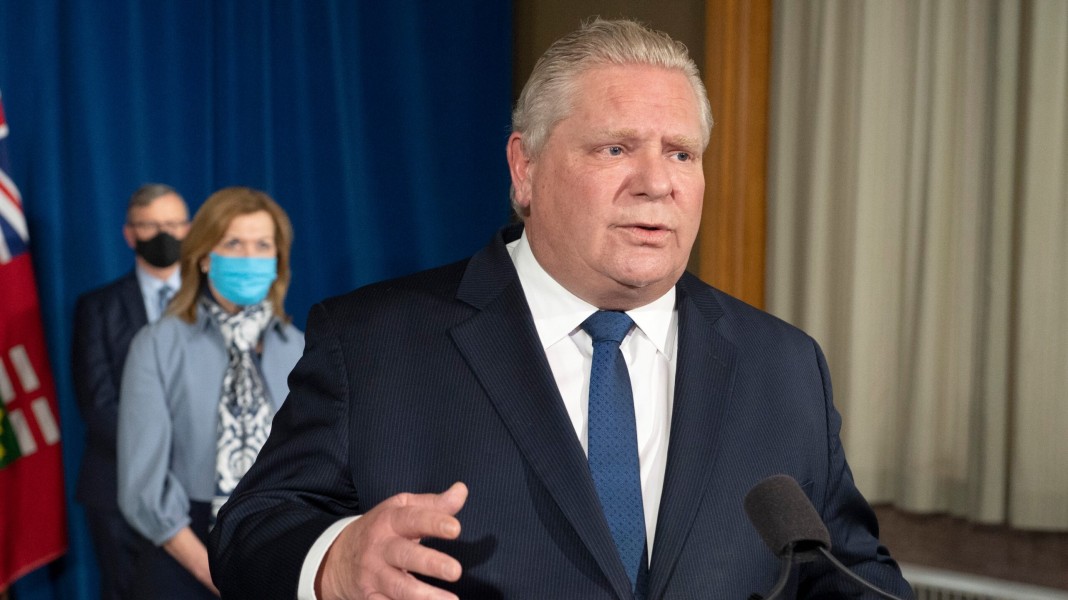 The Ontario government is ordering everyone in the province to stay at home except for essential reasons, while also allowing non-essential businesses to keep operating.

For anyone struggling to reconcile this, Premier Doug Ford has a blunt message.

“There’s no confusion. It’s very simple,” Ford said Wednesday. “Stay. Home. Stay home. If you’re questioning, ‘Should I go out,’ you got the answer: stay home.”

And then, in case Ontario’s hundreds of thousands of francophones failed to comprehend, Ford glanced down at his notes and said: “Restez à la maison.” 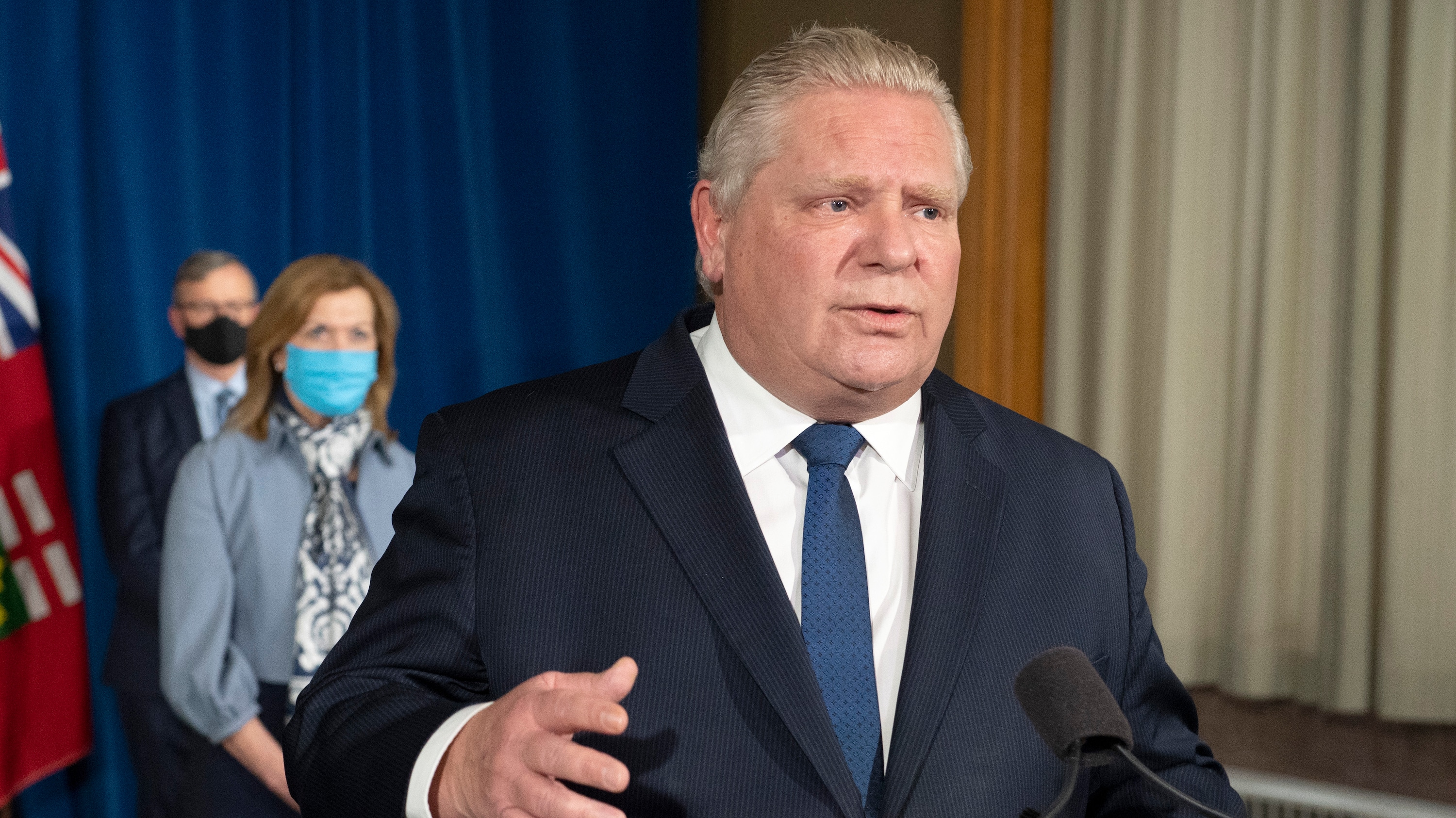 Reacting to suggestions there is some confusion around Ontario’s stay-at-home order, Premier Doug Ford denied there was any confusion at all, saying the message is simple: stay home. 0:52

Since the second wave of COVID-19 began building in Ontario in September, this is the clearest Ford has been in telling people what they must do to rein in the pandemic.

It makes you wonder: if he’d said this a month or more ago and imposed a stay-at-home order and new state of emergency then, how different would things be now?

The wording of the order was published Wednesday evening, more than five days after the news conference in which Ford promised that new restrictions were on the way.

During that news conference last Friday, Ford said the latest modelling for the pandemic was so grim “you’ll fall off your chair.”

Many health experts are questioning why Ford needed that modelling to see the tsunami of COVID-19 cases hitting Ontario, threatening to fill intensive care units beyond capacity.

The government can’t say it wasn’t warned — repeatedly — about what was coming unless tougher restrictions kicked in.

Modelling in late November from the province’s COVID-19 science advisory table projected the province would see an average of 2,000 cases per day sometime in December. Ontario crossed that threshold Dec. 17.

Modelling made public on Dec. 10 warned the province would surpass 300 COVID-19 patients in intensive care later in the month and approach 400 in early January. ICU occupancy passed the 300 mark just after Christmas and hit 400 on Jan. 9, according to the official daily reports by Critical Care Services Ontario.

The real kick-in-the-teeth modelling was published on Dec. 19. It presented evidence that “soft lockdowns” were failing to slow the pandemic in many jurisdictions, including Ontario.

The government’s own scientific advisers said by imposing what they called a “hard lockdown” immediately, Ontario could start to bend the pandemic curve within a week and prevent many thousands of new cases.

At the same time, Ontario’s hospitals were calling for stronger lockdowns in all public health units with high rates of transmissions.

Instead, even as the province was reporting more than 2,000 new cases of COVID-19 every day, the Ford government delayed imposing any new measures until Boxing Day.

The advance notice of the lockdown softened the sense of urgency, undermined the government’s message that things were getting serious, and implicitly told Ontarians it was perfectly okay to go finish their Christmas shopping. Little wonder that Google data showed a sharp spike in movement by Ontarians in the pre-Christmas week.

“It’s not an emergency if it can wait a week,” said University of Toronto epidemiologist David Fisman. “And if it’s an emergency, it can’t wait.”

Although the government called the measures that took effect Boxing Day a lockdown, the restrictions were no stronger than what had been in place for weeks in the hot zones of Toronto, Peel, York and Windsor-Essex — measures that had already failed to slow the spread of the novel coronavirus there.

‘The shutdown was not enough’

Dr. Barbara Yaffe, Ontario’s associate chief medical officer of health, acknowledged this Tuesday, when asked about the steep rise in cases throughout December and into early January.

“What it shows is that the shutdown was not enough,” Yaffe said. “We need more stringent measures.”

So those stringent measures are now in effect: six days after Ford warned they were on the way.

It was two months ago — Nov. 13 — that Ford warned Ontario that the province “was staring down the barrel of another lockdown.”

Yet throughout October, November and December, he also made repeated statements suggesting things were just fine, contradicting the messages of concern

For weeks, Ford repeatedly said “everything is on the table” to respond to the pandemic.

Yet in less guarded moments this week, his comments revealed that some things weren’t ever really on the table.

The new state of emergency did not close non-essential shops, but merely chopped an hour off the opening times they’d been permitted during the soft lockdown of recent weeks.

The stay-at-home order lists 29 exceptions, the bulk of which make perfect sense: you can leave your home to get food, medicine, health care, to take kids between parents’ homes, or if you live alone to visit with one other household.

Some latitude in stay-at-home order

The two exceptions that appear to give the broadest latitude relate to work and shopping.

People are permitted to leave home to travel to work if their “employer has determined that the nature of the individual’s work requires attendance at the workplace.”

Ontarians are also allowed to go to purchase or pick up items — whether essential or not — from any business that is permitted to stay open, including for curbside pickup.

The real question now is whether this latest version of lockdown, with its stay-at-home order, will be effective in bringing down Ontario’s COVID-19 case numbers.

It is possible that this time, the lockdown is really for real, and that Ontarians will be frightened enough by the stay-at-home warnings, as well as the case numbers and the projections for the hospital system, that the second wave will peak soon and begin to subside.

If that doesn’t happen, February will be Ontario’s cruellest month of the pandemic so far.