Why many N.S. municipalities may need to pay more for policing 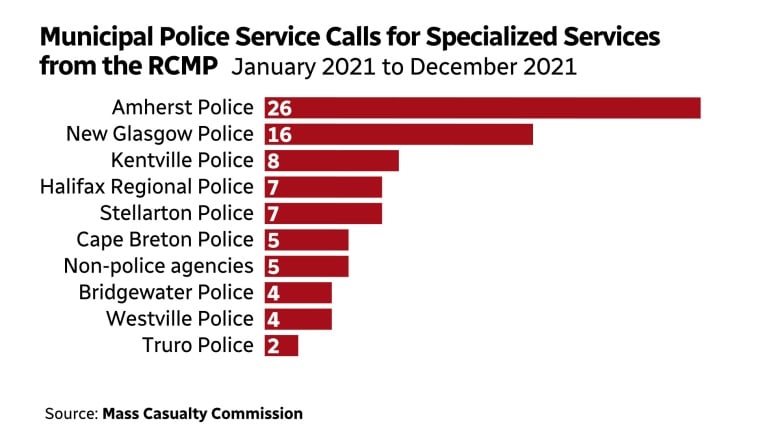 The resources that police forces in Nova Scotia need to protect the public — and how they’ll pay for those resources — will soon be finalized through new standards, in a major shift from years of informal agreements that RCMP leaders say have become a “drain.”

The way that policing is structured and delivered in the province has come up several times at the Mass Casualty Commission leading the public inquiry into the Nova Scotia mass shooting of April 2020.

But the leaders of some municipal police forces say there’s a lot at stake if the new standards include paying the RCMP for specialized services, like major crime, canine, or forensic identification teams — services the Mounties have always provided at no charge.

“If you were to have a murder in this town, it can quickly go into the millions of dollars. You would cripple the town, you would absolutely cripple the police department,” Julia Cecchetto, the retired Kentville police chief, said in a commission interview last August.

Throughout the inquiry, senior RCMP officials have explained details of the services provided to the province, as well as the value of those services.

Nova Scotia’s former commanding officer, Lee Bergerman, recently told the commission that the force started tracking the requests for specialized services from municipal police agencies in January 2021 because “every year we started off with a deficit.”

Chief Supt. Darren Campbell, the former support services officer for Nova Scotia, has told the inquiry these services are “very expensive” as they require highly trained officers that are often diverted from other front-line duties, sometimes for hours or days at a time.

According to a tracking document released through the inquiry, the RCMP logged 84 requests for help from municipal police forces between January and December 2021. The municipalities that made the most requests were Amherst with 26, and New Glasgow with 16 —  but each of the 10 municipal services, with the exception of Annapolis Royal, requested help at least once.

The most frequently requested service, by far, is forensic identification, which was requested 54 times in 2021.

Chief Supt. Chris Leather, the former RCMP criminal operations officer in Nova Scotia, testified in July that those requests can require officers to travel several hours “to fingerprint paper bags and windows” for shoplifting and other low-level property crimes.

Leather said this is both a “significant waste” of a highly trained officer and demonstrates the need for those municipal agencies to have their own general duty members trained to process crime scenes.

Since the RCMP started tracking service requests, some municipal forces have told the commission they’ve either been refused those special services or made to wait days. Three of the municipal requests for service were “rejected,” according to the RCMP tracking document.

“If we had a homicide or if we had a serious barricaded person requiring the Emergency Response Team, people would eventually show up,” said current Kentville Police Chief Jim Butler.

“But it’s the mid-levels, you know things like the robbery we had, looking for a dog. I knew not to call [forensic identification] because they weren’t going to come, we knew.”

As a result, several municipal police chiefs have said they now rely on neighbouring municipal forces that may have more resources.

Campbell said that in the Northeast Nova RCMP district, which covers multiple counties in the northern mainland of the province, about 25 per cent of the four-person forensic identification team’s time was being spent on requests from municipal agencies.

“So there is a drain there,” Campbell said.

Campbell noted that the RCMP had no way to recoup those costs because the Mounties can’t bill municipalities directly. Instead, they collect money from the province for the services they provide municipalities, communities or counties of various sizes under the Provincial Police Services Agreement (PPSA) or Municipal Policing Service Agreement (MPSA).

But, Campbell and Bergerman said because municipalities with their own police forces aren’t a part of the PPSA, the Mounties have always just absorbed the cost of these special services into their own budget.

After decades of this informal arrangement there is “now an assumption that the RCMP is required, or responsible for, providing those specialised services to all municipalities,” Hayley Crichton, executive director of public safety and security with the provincial Justice Department, said in a January interview with the commission.

However, Leather has said there’s no legal obligation for the RCMP to provide these services to municipal agencies — and the province agrees.

In a briefing note for the justice minister updated last January, provincial justice department lawyer Barbara Kerr said there was no “legal requirement” for RCMP to assist any municipal agency under either the PPSA or the Police Act.

As of this week, the province has not billed any municipal agency for RCMP services.

Although Crichton said most provinces have formalized how and when municipal forces pay for RCMP services through memorandums of understanding (MOU), those have fallen by the wayside in Nova Scotia.

Campbell said in a commission interview that the lack of MOUs is “awful” and stood out to him when he arrived in Nova Scotia. But others have told the commission that is simply how things have always been done in the province.

“There was not a lot of formality in relation to interoperability between agencies. Most was done by a smile and a handshake. Some even said some of the decisions were made on the golf course,” Moore said.

Many municipal chiefs in the province have echoed Moore’s impression during their interviews with the commission.

In his June testimony before the inquiry, Truro Police Chief Dave MacNeil agreed that the chiefs assumed the province was paying the RCMP for special service requests under the PPSA because all Nova Scotians pay provincial taxes for the provincial police force — “whether you have your own police or not.”

MacNeil said while municipal chiefs are at the table with RCMP and the province to figure out a way forward on payment, “there’s a cloud looming … it’s kind of an unknown right now.”

Amherst Police Chief Dwayne Pike said in a January commission interview he’s now looking for a formal MOU with Truro police for use of their canine unit and forensic identification team, including payment, “because of the concern whether or not the RCMP might be able to supply those things for us when we need it.”

The question of how municipalities with their own forces will pay for RCMP special services is tied to ongoing work on updating policing standards.

The standards, which Crichton said in a commission interview were last updated in 2003, set a “minimum base requirement” that all agencies must meet across the province and cover things like canine units, exhibits, training and more.

The province has attempted to update the standards for years, but Crichton said it wasn’t until April 2021 that the Justice Department established two committees including people from municipal forces, RCMP, government and police boards to finally wrap them up.

On Thursday, the department said the standards are expected to be finished by the end of March 2023. They will be presented to the justice minister for review, with approved standards eventually becoming regulations under the Police Act.

In a commission panel Thursday, Chief Butler of the Kentville Police said these discussions of standards and who delivers services get to the heart of what Nova Scotians expect from their police.

Councillors and mayors who spoke with CBC about this issue of special services said they hadn’t been following the commission conversation closely, but they will keep an eye on how new standards could affect their budgets.

“It certainly could be a driver in costs, which you know any municipality is not looking forward to. But I guess the bottom line — you have to do what’s fair when you require services,” New Glasgow Mayor Nancy Dicks said this week.

Both Dicks and Amherst Mayor David Kogon said that although policing represents a major portion of their municipal budgets, there would never be a consideration not to call in the RCMP or another force in order to save money.

“The safety of our constituents is foremost. And so … we meet that demand every year through the taxes that we raise,” Kogon said Thursday.

Kogon pointed out that any new cost agreement should go both ways, and ensure the Mounties pay when they use municipal services like Amherst’s major crime unit team. The chiefs of Halifax and Truro police have already told the commission they currently send their canine units or special services to RCMP requests, at no cost.