Why beef is off the menu for some climate-conscious foodies 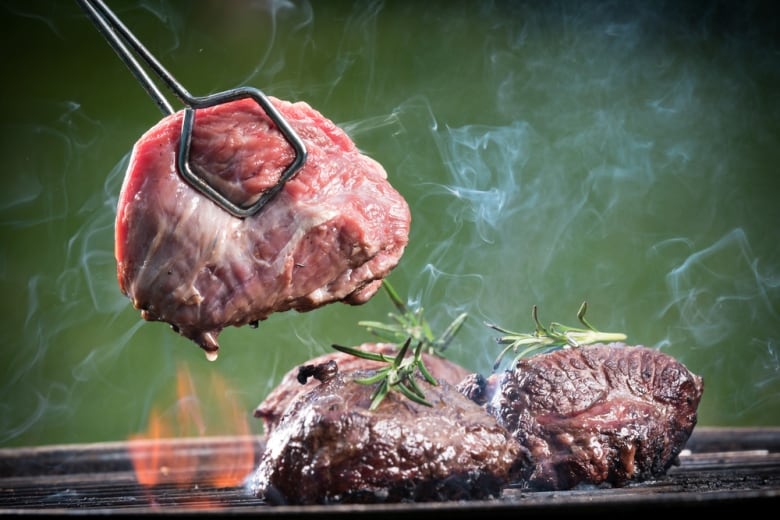 Growing up on a farm in southern Ontario, Toronto chef Ikeila Wright says she ate enough beef as a child to last her a lifetime.

Then, her parents grew crops and raised livestock. Now, she’s the chef and owner at One Love Vegetarian, a Jamaican vegetarian restaurant in Toronto.

“What I eat, what I put on my plate, is personal. And I think for everyone it should be personal, but it also should be conscious,” Wright said.

Wright chose to become vegetarian for health and environmental reasons. Her popular restaurant serves up hearty Jamaican dishes such as callaloo, a barbecue tofu stir fry, potato and chickpea rotis and their signature corn soup.

She’s part of a growing number of people who are worried about the carbon footprint of meat — and beef in particular, which the UN’s Food and Agriculture Organization estimates is responsible for 41 per cent of all livestock emissions, far more than other meats.

Last week, the major U.S. food magazine and website, Epicurious, took a public stand on the issue by announcing they were no longer publishing beef recipes, because of how carbon-intensive the protein is.

While meat products in general result in greater greenhouse gas emissions than plant-based sources of protein, Epicurious singled out beef arguing that one ingredient makes a difference.

In a post titled “The Planet on the Plate: Why Epicurious Left Beef Behind,” the magazine’s editors cited statistics from the World Resources Institute that beef requires 20 times more land and makes 20 times more greenhouse gases than common plant proteins, such as beans. It is also three times more carbon intensive than poultry and pork.

“It might not feel like much, but cutting out just a single ingredient — beef — can have an outsize impact on making a person’s cooking more environmentally friendly,” the editors wrote.

David Tamarkin, one of the co-authors of the post, is the former digital editor of Epicurious. In an interview with CBC Radio’s As It Happens, he said that the magazine made the decision to stop posting new recipes with beef a year before the public announcement, in an effort to be “the most sustainable home cooking publication in the world.”

“If you think about the point of a food publication like Epicurious, the whole point, its entire purpose, is to influence the way that people eat,” Tamarkin said.

“There are millions and millions of people who go to Epicurious every month. If we were successful in replacing one beef meal with one vegetarian meal a month, that is a huge win. Because if everybody did that, that would make an enormous impact on the sustainability of our diets.”

The question for Canadians is how much beef do people need to cut down on to make an impact on greenhouse gas emissions?

Researcher Jim Dyer set out to answer this question in a report last year for Agriculture and Agri-Food Canada. The Cambridge, Ont.-based consultant has worked for the federal government in the past and studies the environmental impact of raising livestock.

The study, aimed at the livestock industry, modelled scenarios where Canadians tweaked their meat consumption without reducing their overall protein intake or cutting out any meat completely.

The modelling found that if red meat consumption dropped 25 per cent — in line with medical recommendations — and was one-quarter beef, three-quarters pork, Canada’s total greenhouse gas emissions from the livestock sector dropped 10.7 per cent. (The study assumed that any drop in red-meat consumption was replaced with chicken.)

“Given the very high GHG emission intensity of beef, it should not be surprising that this analysis found that diversifying Canadian protein intake away from beef to be such an attractive option for lowering the GHG emission budget of the Canadian agriculture sector,” the report said.

Other analyses, including the planetary health diet published in the Lancet in 2019, recommend cutting meat consumption significantly, down to just one serving of beef per week.

Dyer’s paper did not model the impact of cutting out meat entirely from the Canadian diet and replacing it with plant-based proteins like pulses. But he says that shifting to vegan diets would have even greater impacts on carbon emissions.

“The first message was really quite simple, and that is: eat less beef. You still need your protein so find your protein from other ways,” he said.

Typically, grass-fed beef — where cattle graze in a pasture — has been analyzed as higher in emissions than feedlot beef, in part because of land use. But many studies, including Dyer’s, don’t account for the other environmental benefits of grass-fed beef, such as the carbon sequestration in the grass and soil.

That can mean the higher emissions from grassfed beef are offset by the carbon sequestered in the pasture, according to a 2018 study, although uncertainty remains about how much carbon is sequestered.

Dyer’s recommendation is that people should eat less beef — and when they do, they should choose grass-fed beef.

That’s important for Cedric MacLeod, a grass-fed beef producer in New Brunswick. MacLeod and his family operate Local Valley Farm, a farm where cattle roam free and feed on 40 hectares of strategically planted grass. The farm uses as little fertilizer as possible by planting specific types of grasses and using manure effectively, and runs on solar energy. MacLeod, a soil scientist by training, says principles of sustainability are top of mind.

“We do everything we can certainly to minimize our emissions,” MacLeod said.

“For me, managing a grass farm where I employ cattle to help me to manage said grass, so that it helps the soil which I own, which ultimately I’m hoping to pass on to the next generation, in much, much better shape than what I found it.”

MacLeod says that people should be concerned about where and how their food is raised, and be willing to pay for it.

“And when you stitch all those landscape functions together and agriculture as a whole, we’re all contributing to the sector’s contribution to the fight against climate change.”