Why Americans buy another new gun after every mass shooting 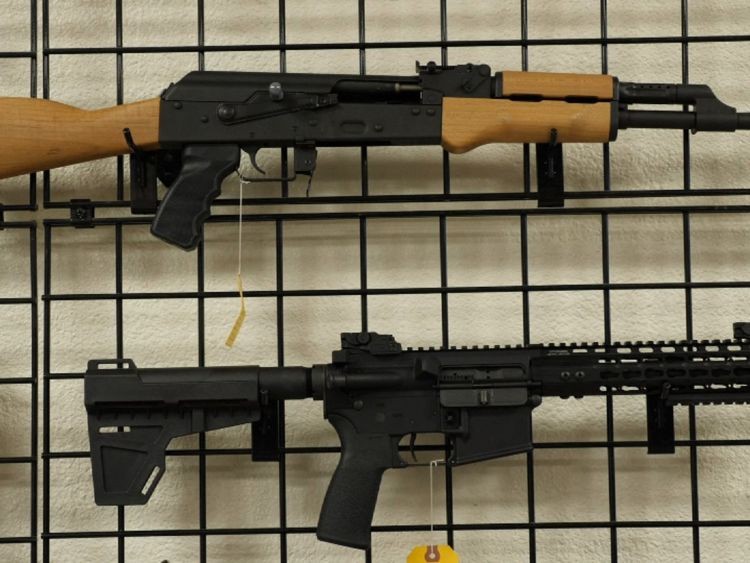 There is a moment in a report compiled by my colleague Cordelia Lynch which sums up the attitude of many Americans to guns.
She meets a young man in a gun shop in Nevada.
A friend of his has been caught up in the concert massacre and now he is queuing to buy a high velocity gun.
Another one. He has several already.
“Given what happened to your friend doesn’t this sit uncomfortably with you,” asks Cordelia.
The man agrees but says he needs another gun to be “prepared” for whatever may happen.
Guns for sale in a gun shop in Las Vegas
It is one of the more inexplicable consequences of mass shootings in America.
In the immediate aftermath, gun sales increase and so do the share prices of the companies who supply them.
Democrats here in Nevada hope that the sheer scale of the Las Vegas shooting – the numbers of dead and injured and the way in which the gunman adapted his semi automatic weapons to fire with greater rapidity – will lead to a breakthrough in gun control, particularly when it comes to automatic assault rifles.
But two things are against any such breakthrough.
First, the fact that Congress is in the hands of the Republicans who remain steadfastly pro-guns, or at least anti-meaningful gun control.
And, secondly, the history of gun control in America.
The gangsterism of the 30s fuelled by prohibition and the Great Depression, greatly increased the use of unregulated and extremely powerful fully automatic weapons.
In 1934, President Roosevelt brought the deadly firearms under federal government control.
For about fifty years, the spread of the weapons was limited.
But, in the last 30 years, things have gone the other way. Now 29 states will only refuse permits to applicants who are criminals or “mentally incompetent”.
In 12 states, permits have been abolished altogether.
The real question is, when will gun violence in America reach a tipping point? Or is there a tipping point?
One would have imagined that point would have been reached with the slaughter of 20 children at Sandy Hook school in 2012.
A Democrat, Barack Obama, was President and he seemed determined to act.
But he didn’t, or rather couldn’t, and the opportunity was missed. If gun controls weren’t imposed then, even to a limited degree, then when will they be introduced?
And one last thought. What seems extraordinary to us in Britain, such as the easy high street access to machine guns and the sheer numbers of weapons an individual is able to own, seems perfectly normal to many, if not most, Americans.
Gun culture is embedded in the American psyche, and the truth is, even 600 people shot by a loser in Las Vegas ain’t going to change that.