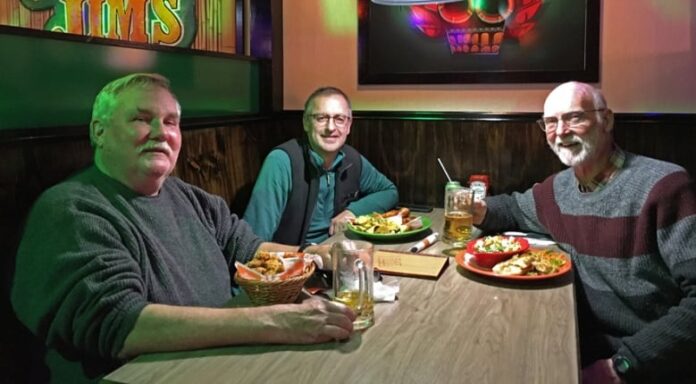 It’s unlikely the average North American would look twice if they saw a Eurasian blackbird in the wild. At first glance, it resembles something close to the basic robin, with its black plumage and pointy bill.

But when it comes to birds, Bruce Mactavish and Ken Knowles are not average North Americans.

The two avid birders — Mactavish from St. John’s and Knowles from nearby Outer Cove — were stunned when they saw a picture circulating on social media days before Christmas of the rare bird on the coast of Labrador. It’s a basic bird in Europe, known there as the common blackbird, but the pair said they’re only aware of one other recorded sighting in North America.

They quickly decided to hit the road. The problem? It was 1,400 kilometres away.

There was an obstacle standing in their way — Christmas. Surely they couldn’t skip Christmas to see a bird, and holiday closures would cause problems along the route. So they took a chance on the bird still being there, and planned to leave on Dec. 27.

They left St. John’s around 3:30 a.m. and headed north. They reached the tip of Newfoundland 12 hours later, just in time to catch the ferry to Labrador. They were welcomed on the other side by fellow birder Vernon Buckle, who had alerted them to the Eurasian blackbird after it was spotted by a couple, Jeff and Tracy Martin, in Cartwright.

The trio slept half the night in southern Labrador before driving four hours to Cartwright, arriving just as the sun came up.

And there it was.

So how long do you spend watching a rare bird you drove 1,400 kilometres to see?

“You’d wonder why we spent four hours looking at the same bird and photographing it, but I took over 300 photos and I think I got one that came out well,” Knowles laughed. “The bird, as is its tendency, hides on the ground in the bushes and trees and shrubs, so it was quite annoying at times.”

They rushed back to Blanc-Sablon, on the Quebec side of the border with southern Labrador, and caught the ferry back to Newfoundland at 7 p.m. the very same night.

They drove 12 more hours, arriving back to the Avalon Peninsula barely three days after they set out in the first place.

“We were elated but tired,” Mactavish said. “We had a little celebratory drink and then went to bed.”

The two birders were still feeling the effects of the trip when they spoke to CBC News earlier this week — but not because they were tired.

“There’s kind of this warm glow,” Knowles said. “Hardly anyone in North America will get to see that bird.”

A rare Eurasian Blackbird turned up in Labrador over Christmas, and two local birders weren’t going to miss their chance to see a bird that’s only been spotted a handful of times in North America.