What we know about COVID-19 vaccines for kids under 5 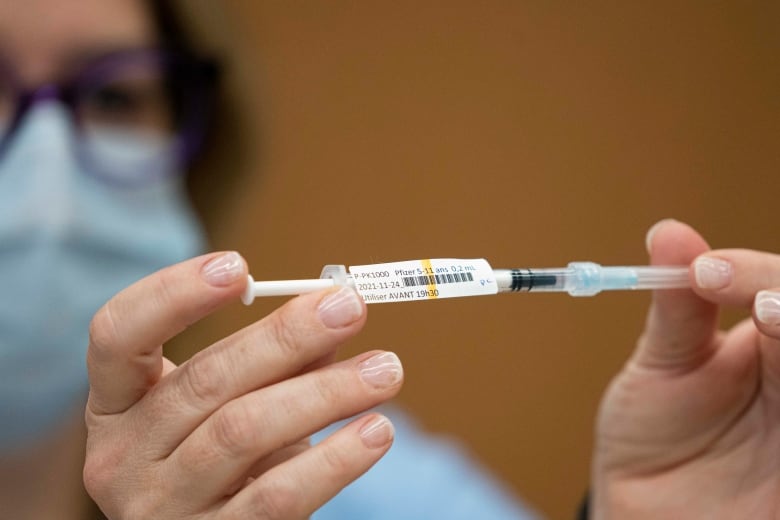 As the highly transmissible Omicron variant of the coronavirus continues to spread across Canada, pediatricians say many parents and guardians of children under five want to know when and if a vaccine could soon come.

It’s still unknown when a COVID-19 vaccine could be offered to kids in this country, as drug manufacturers have yet to apply to Health Canada to provide a vaccine for this age group.

But pediatricians are looking at the United States, where the approval process is moving quickly, to get an idea of when a vaccine could be approved here.

Pfizer-BioNTech was asked by U.S. regulators last week to submit its vaccine application ahead of schedule, potentially opening the way for the very youngest Americans to start receiving shots as early as March.

Pediatricians say that if Pfizer soon gets the go-ahead in the U.S., the company would likely seek approval for its vaccine in Canada and other countries.

“I’m a parent myself, and I have two kids in the five-to-11 age group and they are vaccinated. But I do have a child under five, so I’m pretty excited about the potential of a vaccine in this age group,” Dr. Cora Constantinescu, a pediatrician and infectious diseases physician at Alberta Children’s Hospital in Calgary, told Dr. Brian Goldman, host of CBC podcast The Dose.

Children under five are in the only age group not yet eligible in Canada for vaccination against COVID-19.

Here’s what we know about the vaccine for young children.

How effective is Pfizer’s vaccine?

Canadian pediatricians say information is limited right now because Pfizer has not yet made all of its trial data public.

As part of the approval process to allow the vaccine for children six months to under five years old, Pfizer’s application is before a U.S. Food and Drug Administration (FDA) advisory committee on Feb. 15 for discussion, Constantinescu said.

During that meeting, the public will get its first look at any new evidence of how effective Pfizer’s vaccine series was among preschoolers. The FDA could use the committee’s advice in deciding whether the doses are safe and effective enough for the youngest children.

The drug manufacturer said in December that preliminary study results showed that two low doses of its mRNA vaccine promoted a strong immune response in children between the ages of six months and two years old.

But two doses were less effective at preventing COVID-19 in two-to-five-year-olds. It’s not clear why, but one possibility is that the dose for this age group was a little too low.

For Pfizer’s adult vaccine, each shot in the two-dose series was 30 micrograms, while the dosage amount dropped to three mcg for the under-five age group.

In the trial, there was an interval of three weeks between the first and second shots for kids under five.

Constantinescu said she thinks there are two reasons why the vaccine was less effective for older children during the trial: The 21-day interval might not have been long enough for an immune system response, and the immunological age of kids who are two to five years old could have played a role.

“In a person’s life, their immune system is at different stages,” Constantinescu said, adding that other routine vaccines given to kids at this age often include three or four vaccines.

“It just takes a bit longer to train the immune system to respond appropriately to an antigen, and it’s conceivable that might also weigh in.”

The drugmaker added a third shot to the study, but results are not expected until late March.

Still, the FDA took the highly unusual step of urging Pfizer to apply now for a two-dose series, with a third shot potentially added later.

What is the hospitalization rate for children?

“I think there’s a lot of pressure on Pfizer to submit to the FDA because there’s a lot of concern about the number of children that are being hospitalized in the U.S. with COVID — and some of them with fairly serious disease,” said Dr. Noni MacDonald, a pediatric vaccinologist at Dalhousie University in Halifax.

But in Canada, the hospitalization rate in this age group is not as big a problem as it is in the U.S., MacDonald said.

WATCH | Pfizer’s vaccine for youngsters could get approval in February, reports say: 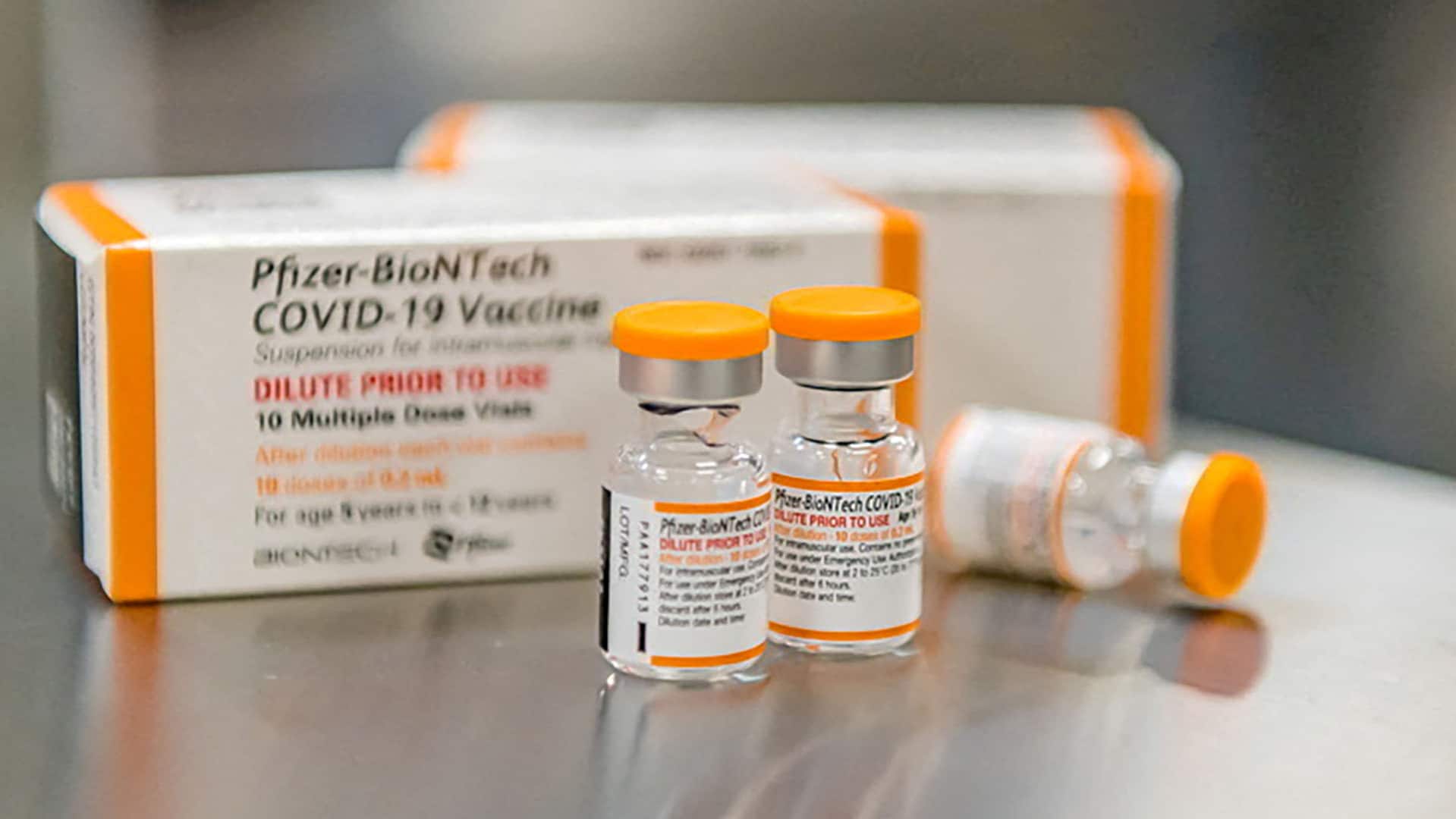 Pfizer’s COVID-19 vaccine for kids under 5 could get approval in February: reports

U.S. reports say Pfizer-BioNTech’s COVID-19 vaccine could get emergency approval for children aged six months to five years by the end of February, much earlier than expected. 2:05

Canada does not provide specific data for the age group up to five years old.

Young children and teens are among the rising number of Canadians being hospitalized with COVID-19 as Omicron infections keep surging across the country.

Medical experts have stressed that there is a reduced likelihood of severe outcomes for the vast majority of children who test positive for COVID-19 and that the rise in hospitalizations among youth is likely tied to the variant’s ability to infect more people.

What do we know about the safety of Pfizer’s vaccine?

Constantinescu said based on what Pfizer-BioNTech has said, there were no safety concerns raised during the trial.

“That’s really reassuring that it’s not a safety problem. The issue seems that the antibody response is not where they were hoping it would be after two doses,” she said.

But the specific efficacy and safety data has yet to be made public.

What do we know about Moderna’s vaccine?

Moderna ran trials of its vaccine for this age group in several Canadian cities.

Similar to its vaccine series for adults, Moderna’s vaccine trial in the under-five age group saw two doses of vaccine given 28 days apart.

A spokesperson told CBC News that the company doesn’t know when it will apply to Health Canada for a vaccine for kids under five but that it is “actively working on it.”

Moderna said last month it expects to report data from its vaccine trials in March.

When will a vaccine be available in Canada?

Pediatricians hope that we could see a vaccine for this younger age group by the summer.

But that all depends on when and if Health Canada approves a vaccine for kids under five.

As of Wednesday, Health Canada has received no applications for a COVID-19 vaccine in children under five years old.

A spokesperson for Pfizer Canada said it’s in ongoing discussions with Health Canada about a vaccine for this age group but couldn’t provide a timeline as to when it plans to apply.

Dalhousie’s MacDonald said she expects the vaccine will be approved for use much quicker than those for older people because the data on its effectiveness in other age groups already exists.

“Now they’re going to look at all of that carefully, but it’s not a truckload of data like it would be if we were starting with a brand new vaccine first out the gate,” she said.

Why should parents, guardians consider the vaccine?

Pediatricians have already heard from parents wanting to know more about the vaccine for kids under five.

Dr. Ayisha Kurji, a Saskatoon-based pediatrician and assistant professor of pediatrics at the University of Saskatchewan, said that earlier in the pandemic, messaging focused on protecting adults and that the risk of severe illness in children was lower.

But as time went on and more was learned about the coronavirus and its variants, the messaging to parents changed.

“It’s still pretty mild, but it is still something that can affect them,” she said.

Both Kurji and Constantinescu said it’s important to relay to parents and guardians that the vaccine will protect children from COVID-19.

“Having that individual protection is important — not just in the midst of a wave, but also long term for their health and well-being,” Constantinescu said. “I think parents are going to do the right thing and protect their kid with this vaccine.”

Written and produced by Stephanie Dubois, with files from Christine Birak and The Associated Press