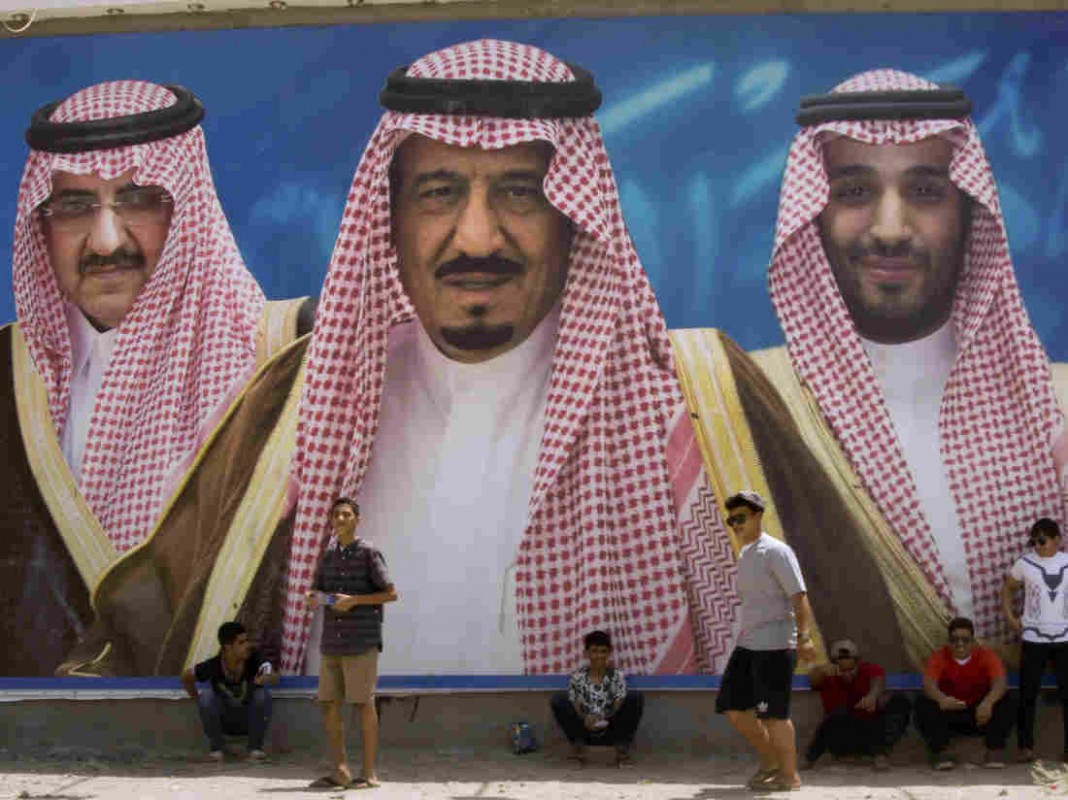 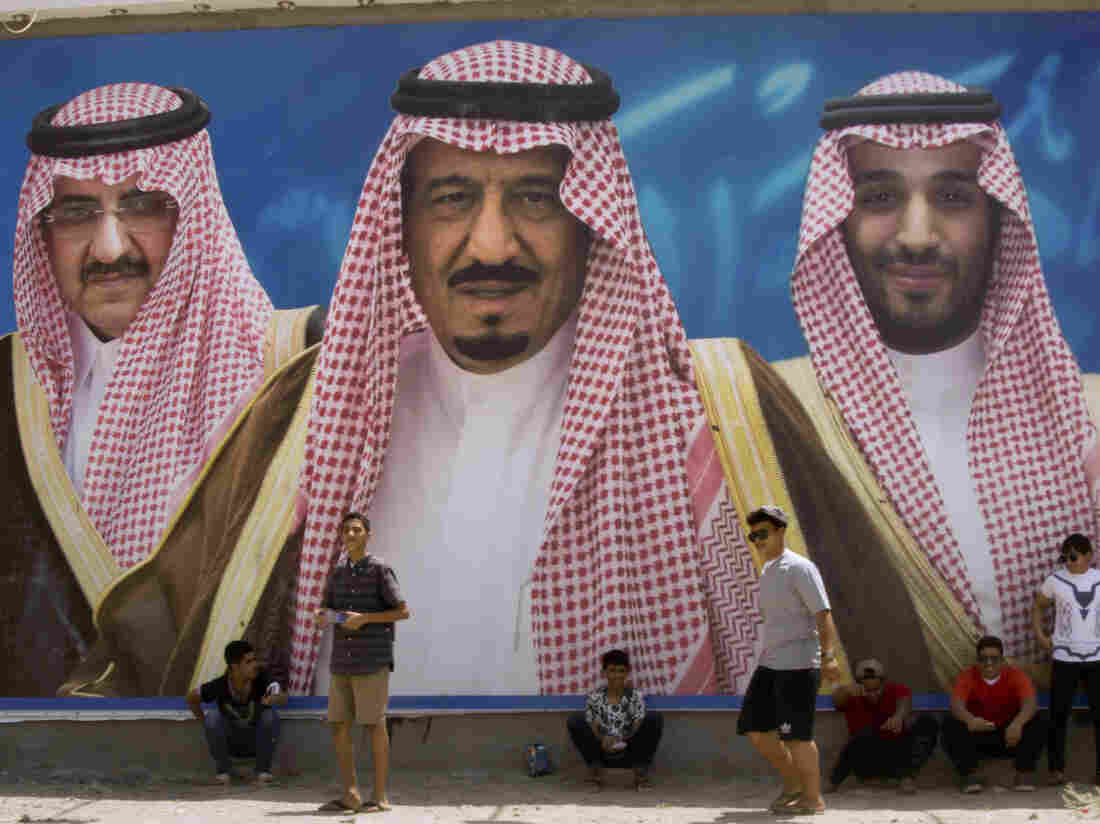 Boys walk in front of a billboard in Taif, Saudi Arabia, showing King Salman (center) flanked 31-year-old son Mohammed bin Salman (right) and Prince Mohammed bin Nayef. The king appointed his son as his successor and first in line to the throne. He stripped Mohammed bin Nayef of the title of crown prince and ousted him from his powerful position of interior minister. Amr Nabil/AP hide caption

Boys walk in front of a billboard in Taif, Saudi Arabia, showing King Salman (center) flanked 31-year-old son Mohammed bin Salman (right) and Prince Mohammed bin Nayef. The king appointed his son as his successor and first in line to the throne. He stripped Mohammed bin Nayef of the title of crown prince and ousted him from his powerful position of interior minister.

Saudi Arabia, a close ally of the United States, is not known for surprises. But in a sudden shift in power, the 31-year-old son of the 81-year-old Saudi king moved one step closer to the throne on Wednesday.

King Salman bin Abdulaziz promoted Mohammed bin Salman, his youngest son, to crown prince. At the same time, the king ended the career of his nephew, 57-year-old Mohammed bin Nayef, the previous crown prince, who had served as interior minister since 2015.

Salman, who will take on Nayef’s old job as interior minister, was relatively unknown in the kingdom when his father came to power 2 1/2 years ago. He has since amassed vast powers, serving as defense minister, overseeing the state oil monopoly and working to overhaul the Saudi economy in the face of a dramatic drop in oil prices.

Young Saudis eager for change see the new crown prince as a modernizer and celebrated the surprise announcement on social media. For an older generation, Saudi television coverage was highly orchestrated, with repeated footage of Nayef, the deposed crown prince, pledging allegiance to his successor.

The new succession lineup and the sidelining of the former crown prince settles the competition between the two men. The Saudi stock market surged, now that there is clarity on who will be the next king. But the abrupt shift comes as the Saudi kingdom faces difficult economic and foreign policy challenges.

Here are some key issues as Saudi leadership moves to a younger generation:

The oil markets have delivered grim news for Saudi’s oil-dependent economy since King Salman came to power and his young son began running Saudi oil policy. With Saudi Arabia the world’s biggest crude exporter, Salman backed a policy that aimed to cripple U.S. shale drilling by driving down prices, but created the current glut. Prices are likely to stay low for some time to come.

The newly minted crown prince built his reputation as a bold reformer. His biggest test will come as he tries to wean the kingdom off an oil economy. His radical proposals, outlined in a program labeled Vision 2030, aim to diversify the economy, with a bigger role for women and a partial privatizing of the Saudi state oil company. The plans include ending popular subsidies for gasoline, electricity and water — which changes the contract between Saudi citizens and the government, and comes with some political peril.

Dangerous regional conflicts are also a challenge, as Saudi Arabia and Iran compete for dominance in countries like Yemen, Saudi’s southern neighbor, which has been devastated by a Saudi-led air campaign to quell an uprising that the Saudis say is backed by Iran.

The Saudi shake-up also comes as the kingdom and its Gulf allies pursue a punishing feud with neighboring Qatar, cutting off trade and air traffic in response to what they say is Qatar’s support for terrorists.

Salman has already reshaped the Saudi role in the region. Analysts and diplomats say he was the prime mover in the kingdom’s decision to go to war in Yemen, and more recently, to lead the campaign against Qatar. Saudi-watchers say his approach is more aggressive and confrontational than past Saudi policy has been, especially toward Iran, which he sees as a great and present danger to the kingdom. His hawkish views on Iran are shared by the Trump administration.

The young crown prince is reported to have a close relationship with Jared Kushner, President Trump’s son-in-law, which became even closer as they worked together to plan the president’s recent trip to Riyadh. When Salman met with President Trump, the two men agreed that Iran represents a “regional security threat,” according to a senior advisor to Salman. The Saudis saw the Trump trip as a “historical reset” of the Washington-Riyadh relationship, after discomfort with the Obama administration’s opening to Tehran.

“We look forward to continuing our work with Crown Prince Mohammed bin Salman in his new role to defeat terrorism and improve our mutual security, stability, and prosperity,” State Department spokesperson Heather Nauert said in a statement Wednesday. “Together we will build on the strong, strategic foundation of counter-terrorism and security cooperation between our countries.”