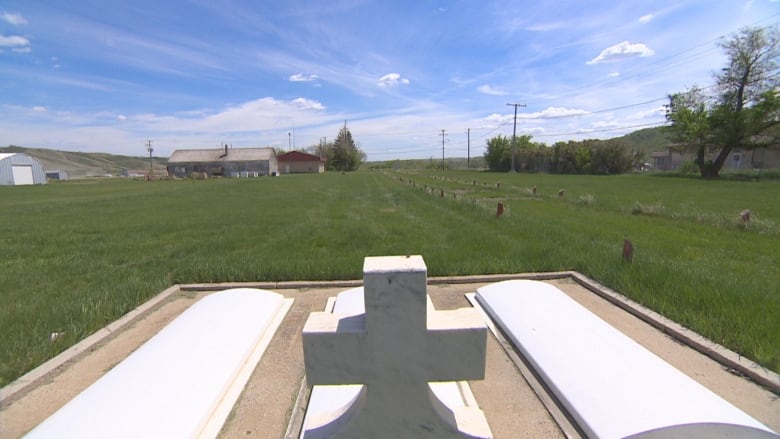 The Marieval Indian Residential School operated on the windswept plains of Saskatchewan, about 140 kilometres east of Regina, for nearly a century.

Although the building has been demolished, traces of the school still remain on what is now the Cowessess First Nation. The church, rectory and cemetery remain.

That cemetery is where the Cowesses First Nation made preliminary findings of 751 unmarked graves reported this week.

Although it is not clear if all of the unmarked graves belong to children, Cowessess First Nation Chief Cadmus Delorme said there were oral stories within Cowesses First Nation about both children and adults being buried there.

Details of the life and death of some of the Indigenous children forced to attend the Marieval Indian Residential School are found in the reports issued by Canada’s Truth and Reconciliation Commissions (TRC), which can be found online.

The TRC determined that 566 children died while at residential schools in Saskatchewan. It also made clear that those confirmed cases form only a “partial record.” The actual death count is likely far higher.

The Marieval Indian Residential School operated from 1899 to 1997.

Lessons at Marieval were taught in English and French, but even into the 1970s students who spoke fluent Cree would attempt to teach and share the language with their fellow students.

Children taken to residential schools were often stripped of their traditional clothing as soon as they arrived. Long hair was usually cut.

Children were forced to attend and live at the school as part of a structured plan that the TRC describes as “a far-reaching system by which the federal government sought to regulate Aboriginal life.”

Part of that structure saw children and parents separated to prevent a family bond and halt the creation of a shared cultural identity.

Florence Sparvier, an 80-year old survivor of Saskatchewan’s Marieval Indian Residential School says a lot of the pain that Indigenous people feel comes from the raw mean-spiritedness that permeated life in residential schools. 3:41

The practice of separation also meant that parents were rarely able to see the children that were taken from them.

The exception was on Sundays, when parents were able to visit their children and take them home for a meal, according to the TRC. But in 1933, the newly appointed principal of Marieval, P. Chatelain, ended that practice. Children would only be permitted to visit their homes under special circumstances.

Eventually Marieval also began accepting what documents refer to as “day scholars,” who were able to return home at the end of each day.

Records for the number of day scholars at Marieval are often missing, but enrolment at the school peaked in 1962-63, with official records collected by the TRC indicating 148 residents and 89 day scholars forced to attend that year.

In 1993-94 there 243 students at the school, although that figure may also include day students.

Schools were often over capacity as officials tried to maximize a model that awarded funding on a per-capita basis.

The youngest survivor to provide the TRC with a statement about Marieval was required to go to the school from 1993 to 1997.

Amber K.K. Pelletier wrote that when she was at the residential school, administrators and teachers still cut students’ hair when they first arrived and assigned them numbers.

When staff were upset, they would refer to the children by their numbers rather than their name, she said.

Although the school drew its residents from First Nations in southeast Saskatchewan and southwestern Manitoba, children were often directed to schools at the whim of government officials rather than the desires of parents.

The TRC outlines the story of Billie Whitehat, who in 1931 sought to have his 10-year-old son attend Marieval, as it was only eight kilometres from his home, instead of the school at Round Lake, located 24 kilometres away. His application was denied.

The local Indian agent J.P.B. Ostrander said he did “not consider the difference in the distances is of any account when the schools are residential.”

Administrators were often focused on the religious sect that operated each location, according to the TRC.

Marieval was initially run under the direction of a variety of organizations through the Roman Catholic Church, while the school at Round Lake was run by the United Church.

“The decision to send children to denominational schools had, in short, made parents pawns in the ongoing conflict between Christian denominations,” the TRC report found.

Education at the schools seems to have originally focused on rote memorization, with an inspector’s report dated to 1932 suggesting that teaching was “merely a question of memorizing and repeating a mass of, to the children, ‘meaningless’ facts.”

Classrooms were often overcrowded and there seemed to be nothing in the way of motivation or self-activity, according to the inspector.

By 1956, things seemed to have changed, with another provincial inspector saying students in one class at Marieval were alert and interested.

Throughout it all, discipline was rigid. Conflict and confrontation “were never far from the surface” in residential schools, according to the TRC report.

For instance, Ostrander denied the request for a student at Marieval to be transferred to another school in order to make sure that other students did not believe the official in charge of discipline was weak and could be pushed around, according to the TRC.

Meals at the school were found to be “nutritionally adequate,” according to a Health and Welfare Canada inspector’s report dated to 1973. But safety was found to be lacking at various times in Marieval’s history.

In 1979, some refrigerators lacked thermostats, while others were set at temperatures too high to keep food at a safe temperature.

Fire safety was also a repeated concern at Marieval. At least one fire at the school was suspected or proven to be deliberately set.

In 1952, a fire inspection found that the fire escape door to the girls’ and boys’ dormitories were locked.

Stressing that what has been found is not a mass grave site but unmarked graves, Cowessess First Nation Chief Cadmus Delorme explained what led to the discovery of 751 unmarked graves at the site of the former Marieval Indian Residential School located about 140 kilometres east of Regina, which operated from 1899 to 1997. 8:35

Even if the door to the boys’ dormitory had been unlocked, it was determined that it would have been impossible to open, as a portion of the latch was broken or missing.

Despite promises to keep the door unlocked, then-principal J. Lemore said he did not believe in the fire escapes, especially during the winter.

“As you know they were condemned and were supposed to be replaced long ago,” he is recorded as saying.