What President said about Trump’s alleged “shithole” comment The US President flattered Nigeria, describing it as “amazing” and one of the most beautiful countries. 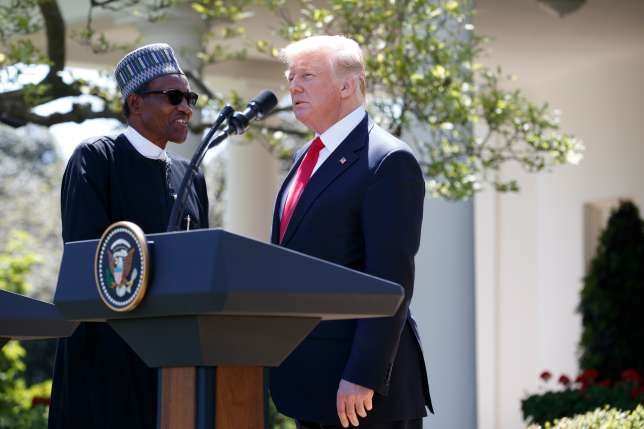 The US President flattered Nigeria, describing it as “amazing” and one of the most beautiful countries.

Trump who has had racism scandal hanging over him had in January 2018 exhibited the tendencies when he allegedly used derogatory words to describe Haiti and countries on the African continent populated by black people.

He was said to have made the statement during an immigration meeting with a bipartisan group of senators at the White House. The US President, however, sort of denied making such comment.

“Why are we having all these people from shithole countries come here?”, a senator at the meeting insisted Trump made that statement.

However, at his meeting with Buhari on Monday, the US President flattered Nigeria, describing it as one of the most beautiful countries, and the two leaders confirmed they did not discuss the “shithole” controversy.

Trump welcomed Buhari to the White House around 12 noon and the two had a meeting at the Oval Office which after they addressed a joint press conference.

At the briefing, a journalist asked Buhari, if he and Trump talked about the alleged “shithole” comment during their meeting – his response was displomatic.

“I’m very careful with what the press says about [people] other than myself. I’m not sure about the validity or whether that allegation against the president was true or not. So the best thing for me is to keep quiet”, Buhari, 75, said.

The US President, who interjected, also said they did not discuss the matter, however, he added that some African countries are in very bad shape and not comfortable to live in.

“You do have some countries that are in very bad shape and very tough places to live in. But we didn’t discuss it because the president knows me and he knows where I’m coming from and I appreciate that. We did not discuss it,” Trump said.

It was the first time Trump would host a President from sub-Saharan Africa since he became President.

Both leaders also discussed aid and removing trade barriers, agriculture and oil, military and intelligence cooperation and the fights against corruption and Islamist terrorism.

The US president described Boko Haram‘s infamous kidnap of the Chibok schoolgirls as “tough stuff”.

Trump also condemned the killing of Christians in Nigeria, saying it is unacceptable to the US government.

Herdsmen, predominantly from the Fulani ethnic group, have been clashing with farmers over grazing issues since January this year, which has led to the death of over 200 people.

The crisis took a different turn last week when the herdsmen attacked a Catholic church, killing two priests and 17 worshippers.

Trump said the US has a “very serious problems with Christians who are being murdered in Nigeria, we are going to be working on that problem very, very hard because we cannot allow that to happen.”

When asked if he would consider visiting Nigeria as his predecessor, Barrack Obama, whose father was Kenyan, never visited the country throughout his time as the US President despite visiting some African nations, Trump excitedly said he would like to visit the most populous country on the continent.

President Buhari was said accompanies to the White House Nigeria’s Ambassador to the U.S. Sylvanus Nsofor, Ministers of Foreign Affairs, Justice, and Trade and Investment, and Governors of Plateau and Ogun.

Others on the delegation were Chief of Defence Staff, Maj.-Gen. Gabriel Olonisakin, Senate Committee Chair on Foreign Affairs, Monsurat Sunmonu and her House of Representatives counterpart, Nnenna Ukejie.