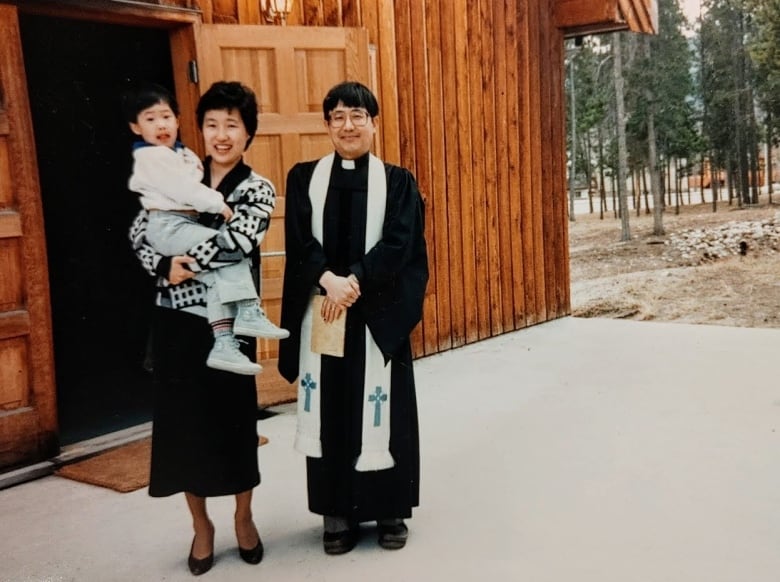 This First Person column is written by Nathan Kim who is a teacher in Mississauga, Ont. For more information about CBC’s First Person stories, please see the FAQ.

My parents, Hoon and Insook Kim, immigrated to Canada from Korea 50 years ago. They settled in a small apartment in downtown Toronto’s St. Jamestown neighbourhood, where they could easily find familiar food and other Korean people, while also taking advantage of the culture and metropolitan lifestyle available in the big city.

In 1983, my dad became a United Church minister and he and my mom moved from Toronto to serve the tiny mountain village of Jasper, Alta. I was born there later that year. When the opportunity arose to move back to Ontario, my dad became the minister in an even smaller village called Wyevale in 1987.

At the time, there were probably more elk living in Jasper than people of colour and we were literally the only non-white family in Wyevale. As a Korean family with a central role in a predominantly white, homogenous community, there were some inevitable awkward and uncomfortable moments.

As a child, I didn’t pay much attention to these interactions. But as I got older I began to realize that some of these situations were inappropriate if not outright racist.

But what stands out is how my parents seemed to let many of these encounters slide. Their goal was always to build relationships with the communities they served and my parents recognized that these interactions were often due to lack of experience with minorities — not from a place of discrimination or hate.

One time, the principal of my elementary school in Wyevale asked my parents to do a presentation for the students about Japanese culture. This was to prepare the school for a visit by a delegation of Japanese education officials who wanted to see a rural Canadian school. Considering Japan’s history of occupation in Korea and that my parents were probably asked simply because they looked Asian, this request was wildly offensive. If it were me being asked this, my hackles would have definitely been raised.

But my parents took this as an opportunity to educate. While not wanting to speak for another community, my parents were able to share some basic insights and Japanese phrases, acquired during my grandmother’s time living under Japanese occupation, to give the students at my school an entry-level ability to welcome the visitors from Japan.

When I asked if these situations ever bothered them, my mom answered, “People with curiosity are the ones trying to make connections [even if] they may be asking uncomfortable questions.”

When I was 15, my family moved to the Greater Toronto Area (GTA). I eventually became a teacher in Peel region.

Education, along with the rest of society, is currently reckoning with racism. School boards are tackling systemic issues such as school staffing that doesn’t reflect the racial and cultural diversity of the student population. Educators are undergoing training to make our programs culturally responsive and students are being taught to celebrate diversity and identify racism.

I am glad this important work has finally moved toward the top of the list of priorities in education.

Still, I worry that some people who are genuinely interested in getting to know someone from another culture may hesitate to break the ice for fear of mistakenly saying or asking the wrong thing — and miss the opportunity to form a bridge between different communities.

Despite the incredible diversity of the GTA, it sometimes feels different communities are siloed, with different cultures living beside each other but reluctant or not interested in interacting with one another.

In these moments, I often think about how my parents’ goal was always to build relationships.

At school, students sometimes ask if I’m related to Asian students or staff members, presumably because of our similar features. As awkward as these questions may be, I’m certainly not about to shame these curious kids as racists. I try to think about the questions or comments they might hear at home or on the streets, and how it might influence them.

So I take a deep breath and I follow my parents’ lead by answering their questions with patience and honesty.

Of course, we do need to call out overt racism and microaggressions rooted in stereotypes. And my parents’ approach might seem naive to some, especially in the context of Black Lives Matter momentum or the rise of anti-Asian rhetoric in North America.

But in its own way, I think it worked. To this day, my dad still gets asked by families from in and around Wyevale, who may or may not have attended his church, to officiate weddings or conduct funerals despite not having preached or lived there in over two decades.

People remember the kindness and sincerity with which my parents served their communities. As we bring the fight against racism to the forefront in education, I try to approach the students I work with the same way.