Wowplus
Home World News US News What are the military options in Syria? 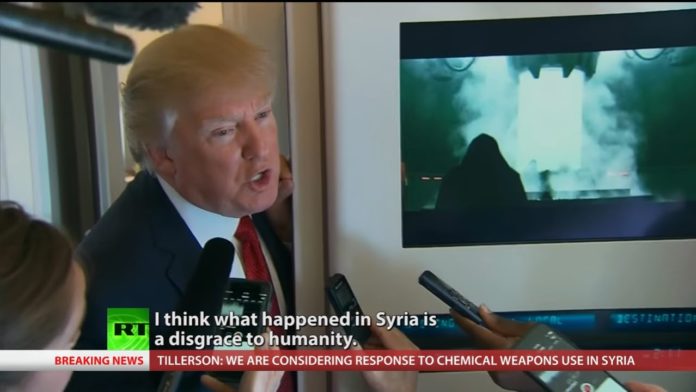 Donald Trump has warned that Russia should “get ready” for military strikes from the US.

Theresa May has said the “continued use of chemical weapons cannot go unchallenged”.

Emmanuel Macron has called for a “strong and joint response”.

But what can the West actually do in response to the alleged chemical attack by the Assad regime in Syria?

The first and most immediate option is for the US to carry out a limited and targeted strike on the specific Syrian base where the chemical attack was allegedly launched from this weekend.

We don’t know where that is but you can bet US intelligence does.

Any strike would likely be similar to a strategy used last April, when President Trump targeted the al-Shayrat base.

I would categorise this as a relatively low-risk option, unlikely to receive retaliation.

But it’s also a low-impact option.

Aircraft were flying off the runway little more than 24 hours after it had been hit last year and, as we now know, it was not enough to stop Assad striking again.

There are 24 airfields in all.

This would be a high-risk option because the more places you bomb, the more chance you end up killing Russian troops embedded in the bases.

Another, but I think unlikely option, would be to target Syrian government infrastructure in Damascus.

That could be the international airport, which is a major hub for Iranian and Russian resupply planes.

Bomb the runway and take that out of action, or maybe a government building like the Ministry of Defence, but this would risk major civilian casualties.

And perhaps even more unlikely, given the language coming out of Western capitals, would be to do nothing at all.

But that would be allowing President Assad to get away with chemical attacks – like the one on Khan Shaykhun last year and the one in Douma this year.

I don’t think Washington or Paris are prepared to let that happen.

What military power does the US have at its disposal?

If America and her allies do choose to launch airstrikes, how might they operate, and from where?

The Americans have a large air force presence at Al-Udeid airbase in Qatar – the largest in the region. That’s also, incidentally, the location for the much-talked about hotline to Russian commanders.

They have also got guided missile destroyers and the USS Donald Cook, which is said to be in the eastern Mediterranean. She left the Cypriot port of Larnaca on Tuesday, carrying Tomahawk missiles with a range of 1000km so they can be fired at Syria from a safe distance.

This is what is called an “over the horizon” weapon.

What about the UK?

If Theresa May decides to go all in, the military assets are already in place, with eight Tornado GR4 jets and six Typhoon fighters stationed at RAF Akrotiri in Cyprus.

The Tornado was designed during the Cold War to fly low and fast over eastern Europe, undetected by radar, and so would be an effective aircraft if called upon to pierce Syrian airspace.

It also carries the Storm Shadow missile, which can be fired from a stand-off position of 300 miles, allowing the RAF to track targets while staying out of enemy reach. It would be very effective against airfields, large buildings and power stations.

A refuelling tanker and a Sentinel surveillance plane are also based at Akrotiri, which would both would play an important role, and an Astute-class submarine is understood to be in the region equipped with Tomahawk missiles.

Finally, there is the RAF Airseeker Rivet Joint. This secretive aircraft has highly advanced equipment on board that can suck up telecommunications.

As for the French, they have a dozen Rafale jets split between bases in Jordan and the UAE.

They also have the option of launching cruise missiles from the frigate l’Aquitaine, currently sailing in international waters in the Mediterranean.

What are the risks of action?

For all the potential options and the scale of the risk attacked to each, the main concern is Russia and how it could retaliate.

Its main airbase is just outside Latakia in eastern Syria, which is also the location of its S-400 surface-to-air missile batteries – possibly the most lethal air defence system in the world.

The airbase’s radar covers an area including the British base in Cyprus and its missiles – capable of travelling at six times the speed of sound – have a range of 250 miles.

It can also engage 36 targets at any one time.

So it is certainly perfectly capable of shooting down incoming missiles and fighter jets.

Those are the options and the risks.