Welcoming visitors is what Whistler does, but for the next 3 weeks the town wants you to stay away 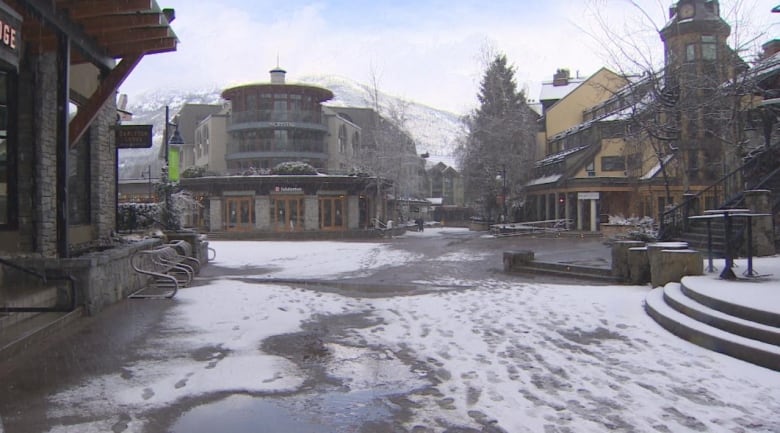 The manager of Whistler Search and Rescue says anyone making plans to visit the Sea to Sky corridor over the next three weeks — even those heading to the backcountry — should reconsider and stay away so the pandemic “circuit breaker” introduced by the province has a chance to work.

Brad Sills says the rapid spread of COVID-19 in the community means the stakes are higher than ever for emergency personnel and for locals whose livelihoods have been devastated by the pandemic.

“The biggest employer in Whistler — Whistler Blackcomb — was summarily closed down on Monday and that has huge economic consequences for a far-reaching number of people throughout the corridor,” he said.

“It’s brought everybody to the realization that we’ve got three weeks to get this fixed if we’re going to open back up again.”

Provincial Health Officer Dr. Bonnie Henry ordered Whistler Blackcomb to shut its ski hills for three weeks in an effort to curb the rapid spread of the P1 Brazilian variant of the COVID-19 virus, which is three times more infectious than the original COVID-19 strain and more virulent among young people.

The mayor of the resort municipality says even though it’s against the very DNA of Whistler to ask people to stay away — especially other British Columbians —  the town needs to turn the tide on the virus.

“Whistler doesn’t have a sustainable economy in the middle of COVID so getting to the other side is critical to the health of our community, economically as well as physically,” said Jack Crompton.

“So, yes, the ask is that people spend these next three weeks close to their own home.”

According to Sills, at least one Whistler SAR volunteer and members of both the Whistler police and fire service have recently contracted COVID-19. Members of all three organizations are still awaiting vaccination.

“If [the virus] spreads to the search and rescue community, then obviously our ability to respond is going to be dramatically scaled,” he said.

Calls to Whistler SAR went up 35 per cent during the summer of 2020. Sills said the increase was driven by a flood of visitors seeking COVID safe activities who were inexperienced in the outdoors.

“[The calls] were for pretty generic, low-intensity incidents such as sprained ankles, dehydration and exhaustion, which indicates that they’re the entry-level types of people,” he said.

“This combination of events is such that people really have to consider their desire to come to the Sea to Sky corridor just to recreate, and weigh that against the consequences of what it poses to this community.”

Last month there were 370 confirmed cases of the P1 variant across B.C., and Whistler has been a continued hot spot.

During a six-day period from March 22 to March 28, Vancouver Coastal Health said it identified 218 new cases of COVID-19 in Whistler.

Health officials say the vast majority of cases, 83 per cent, are in young adults between the ages of 20 and 39.