‘We survived, and we’ll do it again’: Aklavik, N.W.T., residents calm but prepared for possible flooding 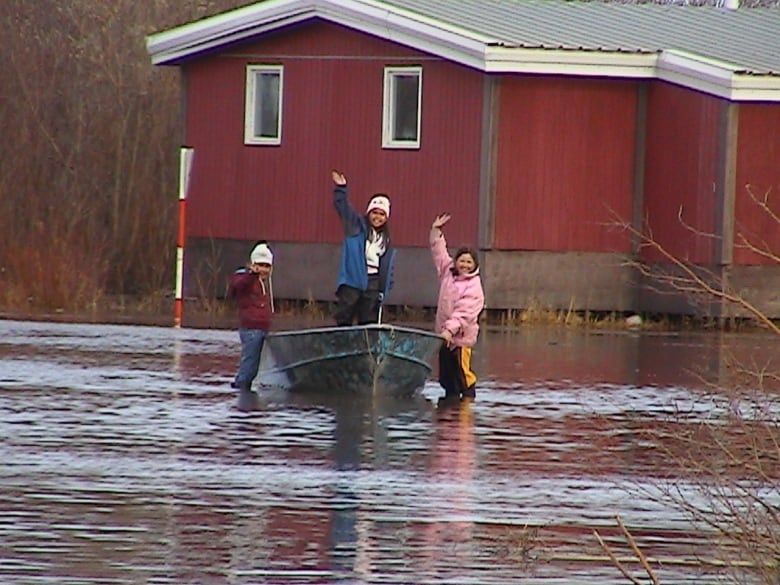 Memories of a flood 15 years ago are top of mind for residents in Aklavik, as they prepare for a spring breakup that has already devastated other communities in the Northwest Territories.

“Our whole yard was full of water,” recalls Mina McLeod.

Although many people were evacuated from the hamlet during the flood of 2006, she and her husband stayed behind to look after their home — and in case someone needed their help.

“My husband runs heavy equipment so he thought that he needed to stay home in case anything needed to be done,” said McLeod. Their kids, small at the time, also stayed with them.

“They would go out paddling in the yard with a little canoe, we have a little long boat and my son was paddling with that. They enjoyed it. It was something to see, for sure,” she laughed.

Though the children made the most out of the experience, the water did take its toll.

“The house that we previously lived in, it was built right on the ground by my husband’s grandfather, so the ground, the insulation, got wet in the floor,” explained McLeod. “After that, we ended up building a bigger house and we built it higher on the ground.”

Despite the damage that happened more than a decade ago, McLeod said she’s not worried about what may come this year.

“We have great leadership, and our community really works well together. We keep residents informed, whether it’s on the radio, or Facebook is huge,” she said. “I just don’t like the mess afterwards. It’s such a huge mess. The ground will be covered with debris and garbage and driftwood and willows.”

The Hamlet of Aklavik issued a flood update on Friday, informing residents an evacuation would be declared if water blocks access to the sewage lagoon or to the airstrip.

Aklavik Indian Band Chief Danny Greenland said if either of those things happen — a siren would sound to announce the evacuation efforts.

“The people to be evacuated will be the elders and the very young children in case of medical needs, which can be handled in Inuvik,” he said, after attending Friday’s flood meeting with other leaders and community partners.

“We’re extra diligent this year due to [Fort] Simpson and Jean Marie [River] really getting flooded pretty bad,” he added.

Those communities, south of Aklavik and situated on the Mackenzie River, are dealing with significant damage and displacement after record high water levels forced evacuations roughly two weeks ago.

“It could be severe here,” said Greenland. “We’re just waiting and watching and hoping it doesn’t happen,” he said.

But if it does — residents in Aklavik say they’re ready.

“We’ve had floods in the past … we survived, and we’ll do it again,” said Greenland.

Allen Kogiak, who works for the Aklavik Hunters and Trappers Committee, has loaded his skidoo on a wooden frame above ground to protect it from the water.

“All this material stuff we have can be replaced,” he said, adding he’s confident in the evacuation plan that’s in place. “As long as our people are safe,” he said.

But Kogiak is also noticing the impact of climate change on his community, and said a plan will be needed if things get worse in the future.

“That permafrost is thawing under our roads. You can put all the gravel you want on, still that permafrost turns to water, there’s no more solid ground,” said.

Kogiak suggested a move up the mountains, after the construction of an all-weather road. But he’s not sure people will be keen to make the move.

“I was raised here all my life, and my kids will live here,” she said. “We love it here.”