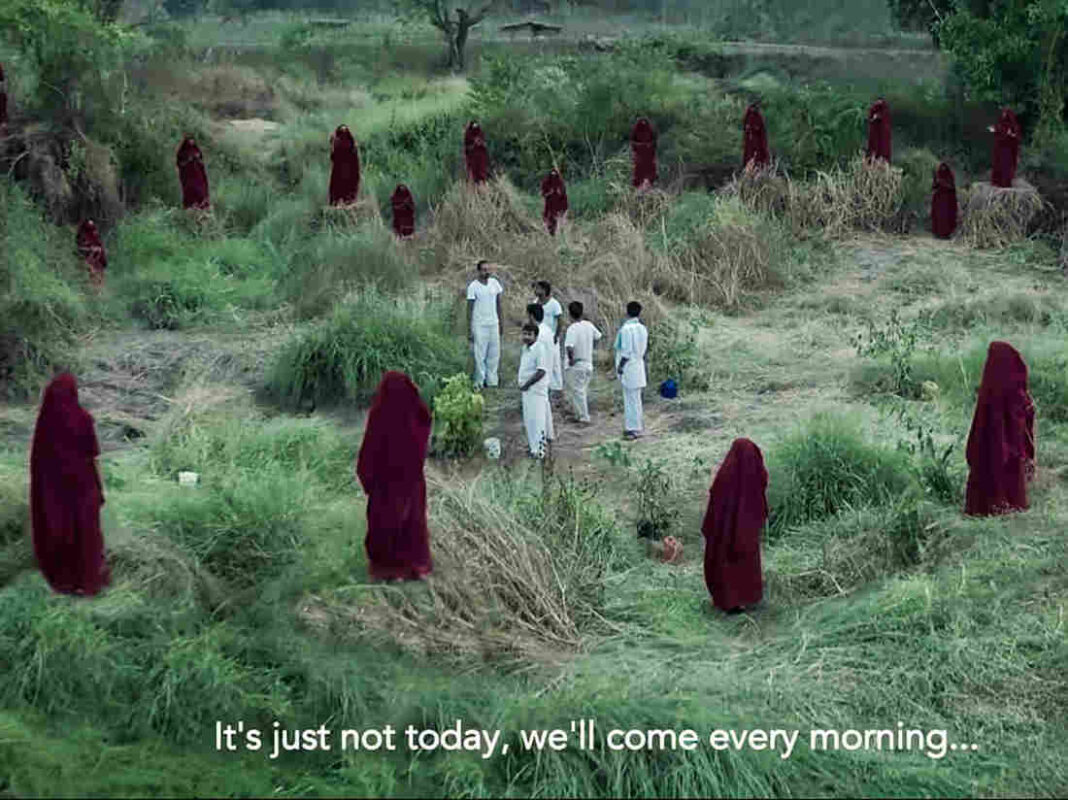 An ad that came out on Monday has gone viral this week in India. The topic? Open urination and defecation.

It goes like this. A group of guys heads out at the break of dawn to relieve themselves in the fields surrounding their village. But, as they start to undo their pajamas, they hear a metallic beat.

From around them, a group of veiled women appear, striking utensils and silverware. They mock the men for answering nature’s call in nature. They call several of them out by name — and attack their pride and honor.

The men ask the women to consider their own pride and let them have some privacy. The women respond: “Oh, really? When we are assaulted or raped because we have to go to the field in the cover of darkness to relieve ourselves, what happens to privacy or honor?” 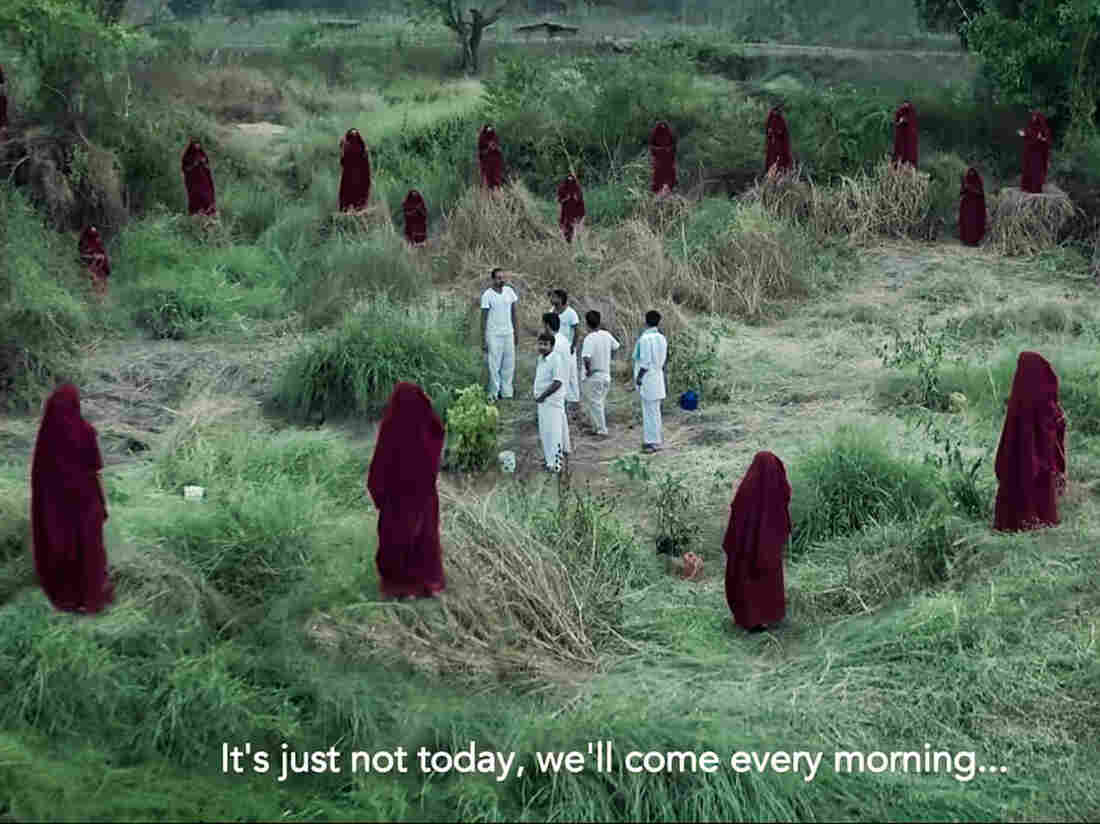 A new ad in India shows women mocking men who answer nature’s call in nature. It’s part of a national effort to encourage men to put a toilet in the family home. Astral Pipes/Screenshot by NPR hide caption

A new ad in India shows women mocking men who answer nature’s call in nature. It’s part of a national effort to encourage men to put a toilet in the family home.

In this video, which had almost 600,000 views by early Monday, the men are shamed into building toilets at their homes.

The ad is for plumbing pipes made by Astral Pipes.

It’s funny, but it’s also calling attention to a serious problem in India — a lack of toilets. The ad is part of the “Corporate Social Responsibility” goal for Astral Pipes; by law every company in India has to spend 2 percent of their annual profit on some kind of corporate social responsibility. (And of course it can’t hurt the company’s bottom line.)

More than 500 million people — representing more than half of the world’s toilet-less people – live in India. According to UNICEF, India has nearly 200,000 diarrheal deaths yearly among children under age five, the highest number in the world. Open defecation is a contributing factor.

And without private toilets, the health of women and girls suffers, too. Many develop genitourinary infections from not urinating frequently enough — and from poor hygiene during menstruation.

The U.N. report also says the lack of private toilets exposes women to physical attacks and even natural dangers like animal attacks and snake bites. Stories of girls being assaulted when they go to do their business in the fields abound.

The “lack of access to washrooms in public spaces and at homes leads to crimes as well as girls dropping out of schools when menstruation sets in,” says Swarnima Bhattacharya, the head of Women’s Health Line who has developed a “Bathroom Justice” campaign to promote public toilets for women. “In rural spaces, girls need to have their own toilets. It’s not just about privacy and dignity but also practicality and health.”

The government is aiming to address the issue with the Swachh Bharat Abhiyaan (Clean India Mission) — India’s ambitious plan to improve access to toilets by 2019.

There’s a social movement pushing the issue as well, sometimes by focusing on the high men-to-women ratio in India: 943 women to every 1,000 men. The message is that a man will have a better chance of finding a bride if his family home (or the home he’s preparing for his future mate) has a toilet.

Another campaign that translates as “No toilet, no bride” in the state of Haryana, where there are 834 women for every 1,000 men — has resulted in a sharp upturn in the number of families who suddenly want to build in-home restrooms. Toilet ownership there increased 21 percent in households with “marriage-aged” men — 22 to 25 — between 2005 and 2009, according to a report released this week in the Journal of Development Economics. Some 1.42 million toilets were built in Haryana during these years, and a third were built in households below the poverty line.

The report’s authors say Haryana state’s imbalanced sex ratio gives women the upper hand in marriage (and toilet) bargaining. Case studies show that after the campaign launched in 2005, brides’ families, traditionally treated as inferior to the groom’s family, have been able to insist on a toilet before agreeing to a betrothal.

And in February, the heads of 110 villages in the state pledged to end open defecation and not marry their daughters into homes without private toilets. Grooms families have to show the village head a certificate of building completion before the marriage can be sanctioned.

And though the ad is fiction, the women-only “Cleanliness Committee” of each village in Haryana’s Kurukshetra district conducted similar actions a few years ago. They stood at crossroads in their villages at dawn with flashlights and sticks, taunting, mocking and then entreating the men who were off to use the fields. They appealed to the men’s sense of honor to protect women who have to go outside to defecate or urinate. The idea was reinforced by the state’s “No toilet, no bride” message. The number of toilets in the district doubled between 2001 and 2009. As of 2012, more than 1,600 villages in the state are open-defecation free. And the state has declared it will be totally open-defecation free by the end of 2017.

But there have been many reports throughout India of toilets being built but not used, or documented as built but really not, and complaints of toilets falling apart because of shoddy material.

And having a toilet at home doesn’t guarantee a woman can use it.

Women are low in the pecking order, Bhattacharya says.

“The presence of a toilet is not tantamount to access or control,” she says. In most families, she points out, men get first dibs, then children, and women last of all.

And the “No toilet, no bride” campaign hasn’t worked elsewhere — like in the neighboring state of Madhya Pradesh — where the male-female ratio is slightly better, 931 women for every 1,000 men. The authors of the journal report found that, instead, what did work was linking a private, indoor toilet to elevated social status and respect.

So, maybe the appeal to honor in the viral video could work in changing the status quo, at least to some extent, says Bhattachary.

“I personally don’t think it’s the best way,” she says — to appeal to the male ego to promote women’s rights. “But on the field, this approach is known to have helped,” she says. “Men are traditionally viewed as providers, and if providing all this makes a man feel like more of a ‘man,’ then, yes, he will be proactive to some extent.”

“Naturally, it will reach rural India this way,” where mobile phones and data connections are more ubiquitous than toilets, he says.