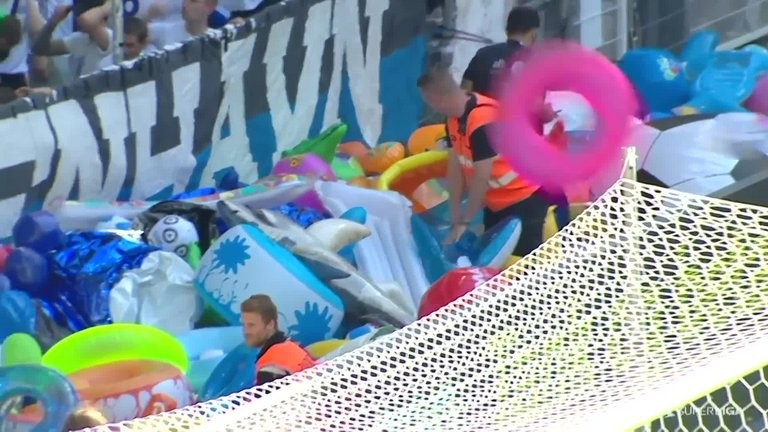 Watch as Copenhagen’s game against SonderjyskE has to be stopped due to an influx of inflatables on the pitch!

FC Copenhagen’s Danish Superliga home game against SonderjyskE had to be paused on Sunday as their fans celebrated by throwing inflatables onto the pitch.

Copenhagen celebrated their 12th title in jovial fashion with this planned pitch invasion at Parken Stadium.

The club’s fans have a tradition of tossing about inflatable beach balls and animals in the 13th minute of the last game of their title-winning seasons.

The result was quite a scene of colour – as you’ll see from the video.

The incident isn’t the most famous inflatable football incident though. That tag is firmly held by Darren Bent when he played for Sunderland in a Premier League game against Liverpool. The Black Cats went ahead when Bent’s shot was allowed to stand after deflecting in off a beach ball.

It was 16-year-old Callum Campbell – a Liverpool fan – who confessed he was responsible for throwing the beach ball onto the pitch.

Thankfully, the scenes in Denmark were less dramatic – but funny nonetheless.

Hit the video to watch the fans shower the pitch with inflatables.