Warmth on the ice: Fishers cherish community that pops up yearly on frozen Manitoba lake 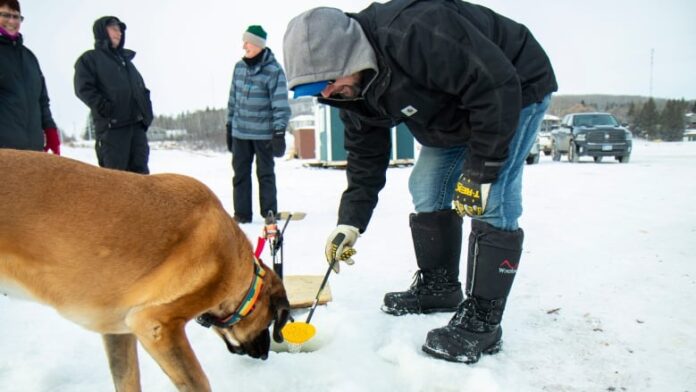 As the temperatures drop and the ice thickens, little communities pop up across southwestern Manitoba lakes.

Steve Woychyshyn had an impromptu day on the lake with some friends Saturday. They wanted to take advantage of the warm weather hovering around –10 C, Woychyshyn said, because it’s usually around –30 C in January which can make for cold days on the lake.

“On a day like this you just can’t help but get out … It’s such a great atmosphere,” Woychyshyn said.

“We don’t only fish here, but we snowmobile out here and have snacks and supper and meals and stuff like that.”

Ice fishing is not only about catching a fish, Woychyshyn said. It’s about the community that emerges on the lake each winter.

Typically the ice is alive with smoke from the shacks and people hopping between different fishing spots. He says he usually takes his sons Alex and Lucas out on the lake because it’s an opportunity to get fresh air and enjoy mother nature.

Woychyshyn has been out for the last couple of weekends. On his last trip they caught about eight jackfish, which he said was exciting for his kids.

“It’s, you know, the socializing aspect too … you get out here and enjoy the fresh air, camaraderie with friends and family,” he said.

This sense of community and camaraderie encourages people to take pride in the lake. He says they keep it clean and look after each other so everyone can enjoy the space.

Ice fishing is a fantastic activity for families, he said. Woychyshyn’s sons have a “blast” on the ice whether they’re fishing, playing with the neighbourhood dogs or racing around playing on the ice.

“At the end of the day you go home. You’re actually tired from all the fresh air and just having fun,” Woychyshyn said.

“When I’ve got my boys and my family and friends around, the best part is just being out again in the fresh air and the socializing and just making memories.”

It is a tight-knit community on the ice in Minnedosa each winter season, said Austin Taylor. The shacks are placed close together so it’s easy to visit and everyone is always ready to offer a helping hand when someone needs it.

Taylor caught four fish in the two hours he had been on Minnedosa Lake, making it a “decent day.”

This winter season is off to a good start because he caught about 27 fish so far in the last month. He tries to go out as much as possible — over the holidays he had a week off from work and was out on the ice almost every day.

Taylor has been ice fishing for about the last four years.

He put his shack near a friend who initially got him into the sport. Taylor said as soon as they cast the first reel, he was in love with ice fishing. He looked forward to being out on the lake with his rods and was inspired to build his own shack about three years ago.

“I would always come out here and you know watch him fish and hang out with him,” Taylor said.

“He kind of just taught me how he did it … I took inspiration, so I built my own.”

He tries to keep his ice shack clean so he can fit as many people as possible inside, and keeps it warm with a powerful little wood stove so they can enjoy their time waiting for fish to tug at a fishing line.

“I like just being able to light a fire, putting rods down … and you just wait and then your fish pop up,” Taylor said.