Walrus makes a rare appearance on N.L. beach — and draws a crowd 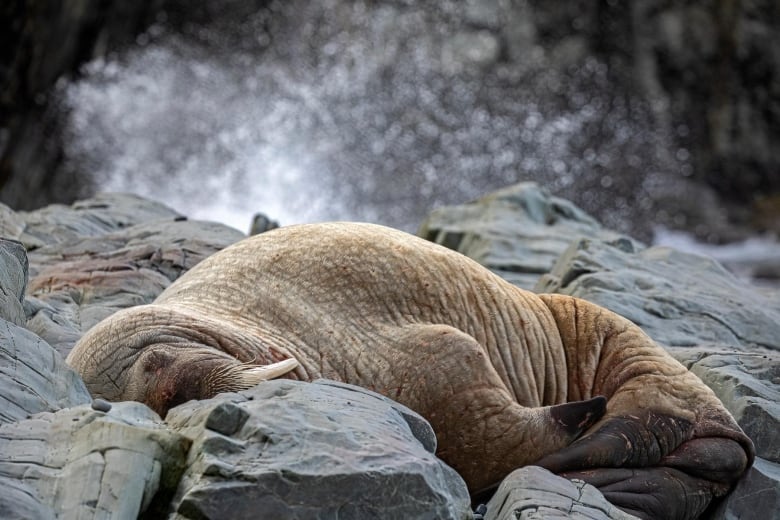 An errant walrus on Newfoundland’s Avalon Peninsula is drawing a lot of attention, though wildlife officials are asking people to give the animal its space.

Middle Cove Beach in the town of Logy Bay-Middle Cove-Outer Cove is a popular spot in the region, particularly in June or July for the annual capelin roll, as locals collect the fish after they spawn.

But this weekend’s visitor was somewhat bigger than a capelin.

An Atlantic Walrus, possibly a juvenile animal due to the medium size and smaller tusks, was spotted sunning itself on the beach on Saturday.

The Middle Cove walrus is attracting quite a crowd. <a href=”https://t.co/Zj5WQkEJDj”>pic.twitter.com/Zj5WQkEJDj</a>

One person to view the walrus Saturday was photographer Alick Tsui, who had been hiking in Logy Bay when he got a notification that the walrus had arrived through social media.

“Seeing a walrus in person, seeing the enormity of the creature and the skin texture and its tusks, it’s amazing. And I don’t have to go anywhere to Russia or Alaska to see a walrus, it’s right here in our backyard in Newfoundland,” he said.

Tsui said the sight had already attracted a crowd when he arrived at the beach late Saturday afternoon, but the people seemed to be keeping their distance.

“You have to stay a safe distance out of harm’s way because a walrus is a wild animal,” Tsui said, “so you never know how a wild animal can respond to human intimidation. So I think we were behaving really well.”

While not unheard of, having a walrus this far south is rare.

On Sunday, the Department of Fisheries and Oceans posted a light-hearted tweet, asking people to let him enjoy his nap.

Crowds of people continued to flock to the beach for a view of the animal, prompting the department to place a pair of officers on guard and ask the crowd to keep a safe distance.

In an email to CBC News on Sunday, DFO said fisheries officers are on the beach to protect both the walrus and people, and the officers will ensure the walrus has clear access to the water. DFO research scientists have also visited the beach.

The department said it’s not unusual for walruses to snooze and bask in the sun, but while frequently docile, they can be dangerous and can move on land as fast as a running human being.

“We understand that people are excited to see this walrus. It is a rare occurrence here, but people should stay well back from the walrus and frankly, just leave it alone,” a DFO spokesperson said.

The department said marine mammals are subject to the provisions of the marine mammal regulations under the Fisheries Act, which requires people to stay a minimum of 100 metres away from a walrus.

But as of Sunday afternoon, the walrus appeared only interested in sand and sun. Tsui said for its part, the walrus seemed to be enjoying itself.

“A lot of people were thinking that the walrus was in distress. Apparently he was checked and seems to be in good shape and just trying to get a lazy day on the beach for Newfoundlanders to observe.”