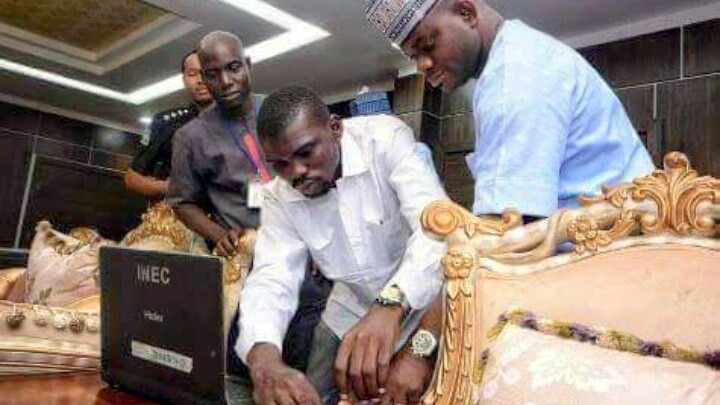 Gov. Yahaya Bello of Kogi State has dismissed an allegation by the Independent National Electoral Commission (INEC) that he registered twice as a voter in Abuja and subsequently in Lokoja.

Mr. Bello said this when he spoke to State House correspondents in Abuja on Friday after observing the two-raka’at Juma’at prayer at the Aso Rock Mosque.

The governor was caught on camera registering for a permanent card in Kogi after doing so earlier in Abuja.

His office defended the action, blaming INEC for not delivering the first card to the governor.

INEC on May 25 via a statement issued by its national commissioners and chairman, information and voter education committee, Solomon Soyebi, confirmed that Mr. Bello registered twice as a voter.

The commission however said Mr. Bello was protected by constitutional immunity from prosecution.

Mr. Soyebi said the governor first registered in Abuja in January, 2011, and subsequently on May 23, 2017, in Government House, Lokoja.

He described the governor’s double registration and doing so outside lNEC’s designated centres as illegal.

Reacting to the allegation, Mr. Bello said it might be his ghost that must have done the double registration and not him.

“I think INEC has earned itself a very high reputation and I’m very confident that the leadership of INEC will not allow some elements to drag its name into the mud.

“Actually, that is a falsehood; I did not do double registration of permanent voter card,’’ he said.

The INEC statement read: “It has come to the attention of INEC that Gov. Bello of Kogi state registered as a voter for the second time on Tuesday May 23, 2017, in Government House, Lokoja, the state capital.

“The governor’s double registration and doing so outside lNEC’s designated centres are both illegal.

“For the on-going Continuous Voter Registration (CVR) exercise, INEC has designated a centre in each of the country’s 774 local government areas including FCT’s six area councils.’’

INEC has since dissociated itself from the governor’s action while it also pledged to take disciplinary action against its staff implicated in the second registration for Bello.

On outstanding salary arrears of workers in Kogi, the governor pledged to abide by the decision of the governors’ forum to use part of the outstanding Paris Club refund meant for the state to settle the arrears.

Mr. Bello also frowned at those calling for his impeachment over alleged non-performance, saying his achievements in the last 15 months could be seen by well-meaning citizens of the state.