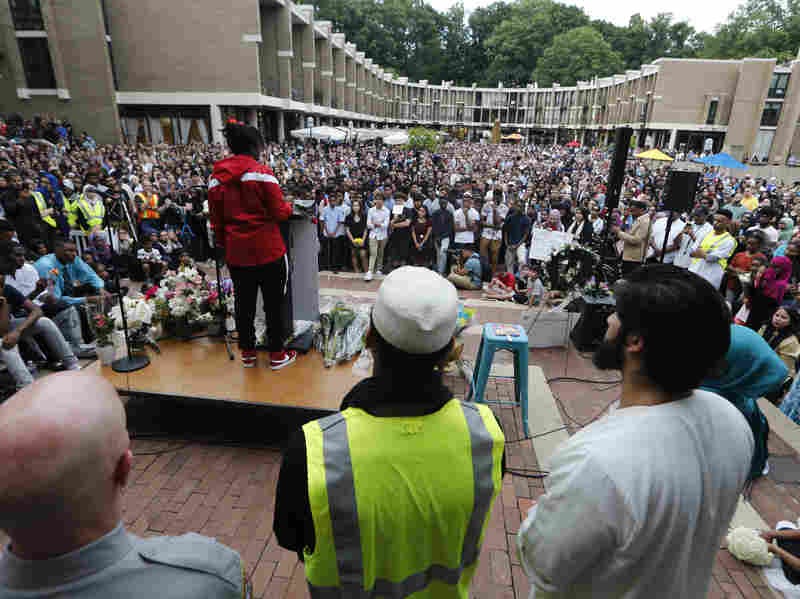 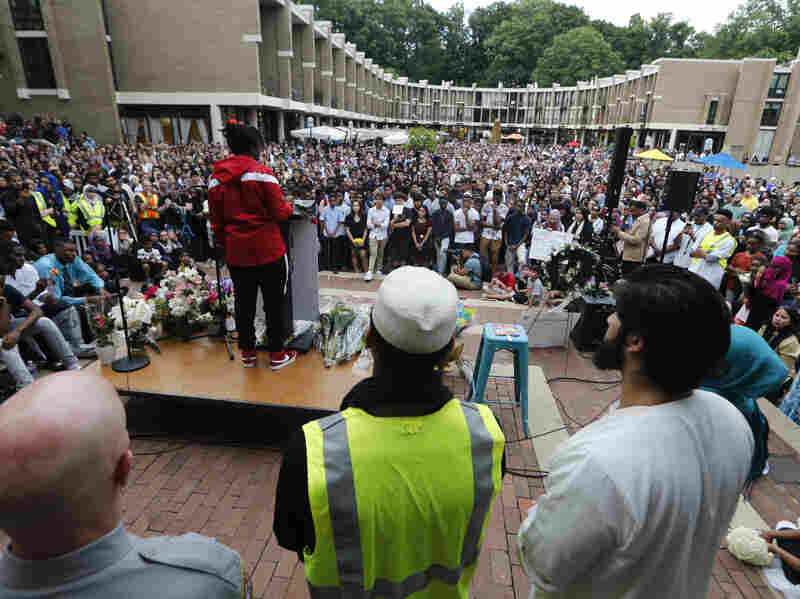 A speaker addresses the crowd Wednesday at a vigil for 17-year-old Nabra Hassanen, who was killed Sunday in Northern Virginia as she returned to a mosque with a group of friends. Steve Helber/AP hide caption

A speaker addresses the crowd Wednesday at a vigil for 17-year-old Nabra Hassanen, who was killed Sunday in Northern Virginia as she returned to a mosque with a group of friends.

Seventeen-year-old Nabra Hassanen was buried Wednesday after a funeral service packed with mourners. The service was held in the Northern Virginia community where she’d lived. An evening vigil organized by her high school’s Muslim Student Association also drew throngs of people.

Hassanen was beaten and killed early Sunday morning as she walked back to her mosque after a pre-dawn meal with friends. Such meals are common during the month of Ramadan, when many Muslims fast from dawn to sundown.

“There is nothing like losing a child, especially in the way that we lost Nabra,” Imam Mohamed Magid said at the funeral, The Associated Press reports. Magid is the religious leader of the All Dulles Area Muslim Society and spoke at the funeral there.

Friends said Hassanen was always there for them and befriended everyone she met, The Washington Post reports. The night she died, she had just had a group of Muslim and non-Muslim friends over to her Reston apartment for dinner to break the day’s fast, the Post says.

Darwin Martinez Torres, 22, is being held on second-degree murder charges in Hassanen’s death. As we reported, this is how the attack unfolded:

The teenagers were walking and riding bicycles back to the All Dulles Area Muslim Society at about 3:40 a.m. Sunday, according to police.

Some of the teens were on the sidewalk, and others were in the road. Torres drove up behind the group, began arguing with a boy on a bike and then drove his car onto the curb, detectives said in a statement. The teens scattered, but, police said, the suspect caught up with them in a nearby parking lot, got out of his car and allegedly chased after them with a baseball bat.

Torres caught Nabra and struck her with the bat, according to the statement. Detectives said he then drove her to another location and assaulted her again. Her body was found in a man-made pond a few miles from the parking lot. An autopsy found that Nabra suffered blunt-force trauma to her upper body.

Police have described the killing as an act of road rage. After the funeral and burial, Fairfax County Police Chief Edwin Roessler Jr. told AP that police have “absolutely no evidence” the attack was motivated by hate. But Roessler acknowledged that some in the community believe police should explore the possibility it was a hate crime.

He asked that anyone with evidence to that effect come forward, AP says, and added that “if evidence develops of a hate crime, I promise we will charge to the highest levels.”

Roessler said police are awaiting results of forensic tests to determine whether Hassanen was sexually assaulted.

The AP spoke Wednesday with some of the people at the funeral, who expressed fears for their own families.

Lamia Sarver of McLean, Va., told the AP her own daughter is the same age as Hassanen. Sarver said she doesn’t want her daughter to be a target, so she’s told her to pray at home rather than attending late-night mosque services with friends.

And Zahid Hassan of Fairfax told AP, “I have two daughters.” Choking back tears, he added, “It could have been anybody.”