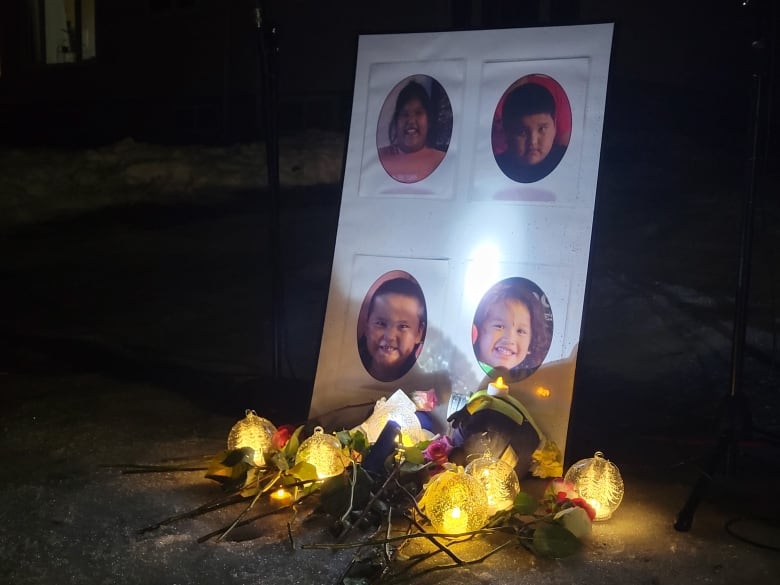 Over 100 people attended a flashlight prayer vigil in Thompson, Man., to offer their condolences for four children who died in a fatal fire in the community earlier this week.

Shelly Thomas’s five children, aged four to 13, were upstairs during the fire. Only the eldest escaped.

Those that made their way to the vigil at Queen’s Bay laid an abundance of stuffed bears, plush toys and candles in front of the house where the tragedy happened.

“Personally for myself, I’m still trying to absorb it and process the loss,” said Terry Lynn Thomas, the older sister of Shelly Thomas and aunt of the children. “I’m trying to accept it, like it’s not real. It’s such a huge loss and I feel my sister’s pain.”

“The loneliness is just tremendous,” she added.

Several community officials attended the vigil, including MLA for Thompson Eric Redhead and newly elected mayor Colleen Smook, both of whom offered their sympathies.

On Friday, Smook spoke about how the incident had impacted the community at large.

“It affects the whole north,” she said. “Parents being from two of our outlying communities, it definitely brings us all closer together, it hits home for a lot more people.… There will be a lot more people that need support, and our continuing support, as things go ahead.”

Shirley Robinson, a band councillor in Pimicikamak Cree Nation and a cousin of the children’s mother, was thankful for the healing power of the vigil.

Shelly Thomas is originally from Pimicikamak.

“It has brought a lot of comfort to the family with the community coming together,” Robinson said. “From all places, coming from different nations and communities, travelling in to come take part in this. It means a lot to the family.”

“It’s amazing, how much love we’ve felt here this evening,” she added. “To come and honour our little angels that have gone before us.”

‘I can’t even imagine’

Another vigil was held in Winnipeg, with around 50 people gathering at Oodena Circle at the Forks to support the family.

“There’s a lot of pain in my community.… Losing four children is really hard to see. I think it’s the hardest,” Pimicikamak Cree Nation Chief David Monias said at the Forks.

“The mother is crying, you know, [she’s] sad, lonely. She tried to save her kids. She burned her face. She burned her hands. I can’t even imagine what she’s feeling right now,” Monias said.

Funds were collected at the Winnipeg vigil to help subsidize travel costs for another sister of Thomas’s who hopes to travel to Thompson to support the family in their grieving.