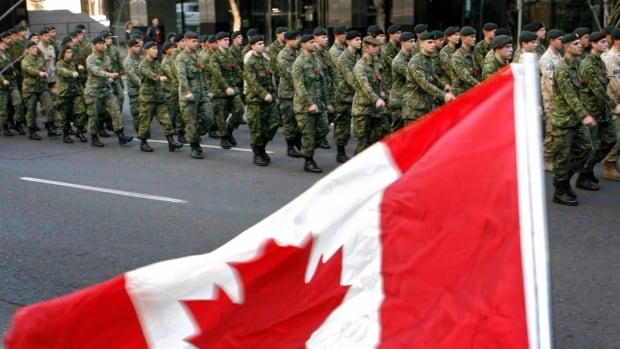 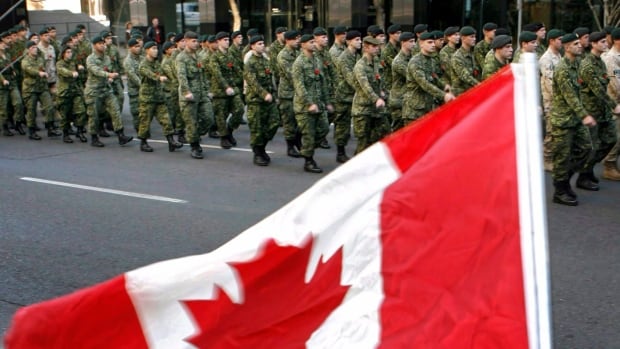 Wounded and injured soldiers — both serving and retired — have been given the option of postponing the filing of disability claims until after the Liberal government’s pension-for-life plan is implemented on April 1, CBC News has learned.

Those who file a disability claim before April 1 do not get to opt for a pension-for-life. They’re entitled only to lump sum compensation. Holding off until the new budget year begins gives them that choice between the pension and the lump sum.

And it turns out the delay also helps Veterans Affairs out of a budget jam, according to leaked Department of National Defence documents.

One of those documents — an email dated Feb. 4, 2019 — stated there is a shortage of disability award funds “within VAC due to [the] increase of awards from [the application] backlog clean up.”

The bigger problem, according to a veterans watchdog group, is that the option to delay filing has not been communicated to the wider veterans community.

According to the documents, the process change has been passed along to those still in uniform through the military chain of command and support centres.

It’s another example of a double standard at work within Veterans Affairs, said Mike Blais, president of Canadian Veterans Advocacy.

“There’d be many who would want to avail themselves” of the pension option, Blais told CBC News. “I’m very disappointed. It’s supposed to be one veteran, one standard.”

Blais praised National Defence for being proactive but said Veterans Affairs is missing in action.

“It’s not fair for Veterans Affairs Canada to come forward with a program that benefits those who are serving while excluding and denying veterans in the wider community,” he said.

A spokeswoman for Veterans Affairs, Emily Gauthier, said in an email there have been “communications” with the veterans community and the department has “designed a process so a current application could be suspended and transitioned” to the new system.

National Defence, it seems, went to extraordinary lengths to get the word out among those still serving.

A spokesman, Maj. Travis Smyth, said late Thursday that 3,500 letters were sent in December to members who were scheduled to retire in the near future. Those letters were followed up with telephone calls and in-person interviews.

All of it, Smyth said, was supported by Veterans Affairs.

During the 2015 election campaign, the Liberals promised to give injured military members the option of receiving either a lifetime pension or a lump sum disability award.

The plan, which involved a complex redrawing of the benefits system, was unveiled in December 2017 with a scheduled implementation date of April 1, 2019.

At the moment, military remembers are only eligible for a lump sum award to compensate for pain and suffering due to injuries.

Those veterans whose applications are now in the system — and processed before March 31 — do not have the pension option.

“Please note that the VAC (service delivery) team has just released a new directive to deal with those (Canadian Armed Forces) members (who are) applying for a (disability award/disability benefit) but wish to wait (hold) on their approval until after 1 Apr 19 in order to receive a monthly payment vs. lump sum award,” reads a Feb. 4, 2019 email obtained by CBC News, written by Lt.-Col. Trevor Campbell, a liaison officer to Veterans Affairs.

“There has also been a lot of discussion here lately on temporary shutdowns and delaying of adjudication decisions until post [pension for life] implementation.”

Part of the reason for offering veterans the option of delaying disability claims is the administrative and information technology changes the new pension-for-life will require. But the other — and more significant — reason for the policy shift is the budgetary crunch at Veterans Affairs created by an enormous backlog of disability applications.

As of last December, Veterans Affairs had 27,107 disability claims registered in the system. Of those, 15,421 — 57 per cent of the total — had been waiting in the queue for more than four months.

Veterans Affairs officials recently went before Parliament to ask for a budget top-up of $323.2 million.

“The requested funds are to support increases in some programs which stem mainly from an increased number of veterans accessing support, such as the Disability Award and the Earnings Loss grant,” say the supplementary budget estimates tabled Jan. 29, 2019.

Blais said the department should have had a better handle on the numbers.

“I think they underestimated the ability of the community to get veterans to come forward, particularly on mental health (claims), and that their projections were woefully inadequate,” he said.