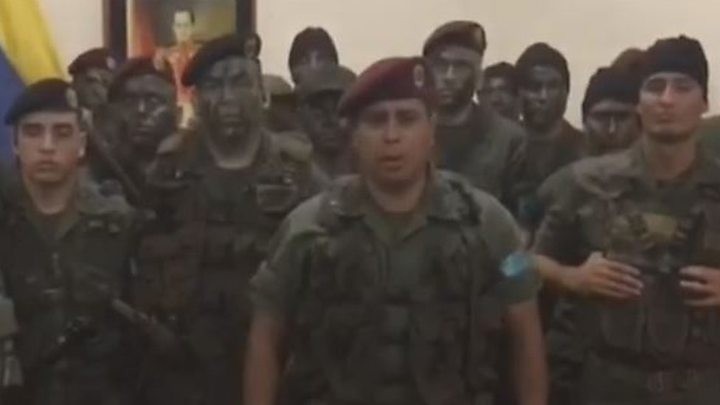 A hacking group has attacked Venezuelan government websites in an operation targeting the “dictatorship” of President Nicolás Maduro.

Calling itself “The Binary Guardians”, the group posted messages appearing to support the actions of a group of armed men who attacked a military base in the central city of Valencia on Sunday.

Meanwhile, supporters of President Maduro marched in the capital Caracas.

They called for an end to months of opposition protests and unrest.

More than 100 people have died in the protests against the failing economy and what the opposition sees as the government’s illegal attempts to cling to power.

A message on the main government site made reference to “Operation David”, which Venezuelan media had reported was the codename of the attack in Valencia.

“This dictatorship has its days numbered,” it added.

The government said it had repelled the attack in Valencia, which was carried out by a group of armed civilians led by a military deserter.

A search was under way for 10 men who escaped with weapons after the attack, Mr Maduro said.

The assault in the north-western city of Valencia was carried out by 20 people, the president said. Two were killed, one was injured and seven were arrested.

Earlier, a video posted on social media showed uniformed men saying they were rising against a “murderous tyranny”.

On state television, Mr Maduro congratulated the army for its “immediate reaction” in putting down the attack in the early hours of Sunday, saying they had earned his “admiration.”

He called the incident a “terrorist attack” carried out by “mercenaries”, and said the security forces were actively searching for those who had escaped. “We’ll get them,” he vowed.

The government said that those arrested included a first lieutenant who had deserted. It said the others were civilians wearing uniforms.

Mr Maduro said the group had been backed by anti-government leaders based in the US and Colombia.

In Sunday’s video, a rebel leader who identified himself as Juan Caguaripano, said that his group – which he called the 41st Brigade – was taking a stand against the “murderous tyranny of President Nicolás Maduro”.

“This is not a coup but a civic and military action to re-establish constitutional order.”

Violent demonstrations began in April and have spread across the the country which, despite being oil-rich, is experiencing severe shortages of food and medicines, as well as inflation in excess of 700%.

The incident in Valencia came the day after the first session of the newly inaugurated Constituent Assembly, seen by the opposition as a way for the left-wing president to cling to power.

Is Maduro on a power grab?

Mr Maduro has repeatedly said that the new body will bring peace to the country.

The Constituent Assembly has the ability to rewrite the constitution and could override the opposition-controlled parliament, the National Assembly.

On Saturday, it immediately voted to dismiss Chief Prosecutor Luisa Ortega, a former ally of President Maduro who has become a major critic of his rule.