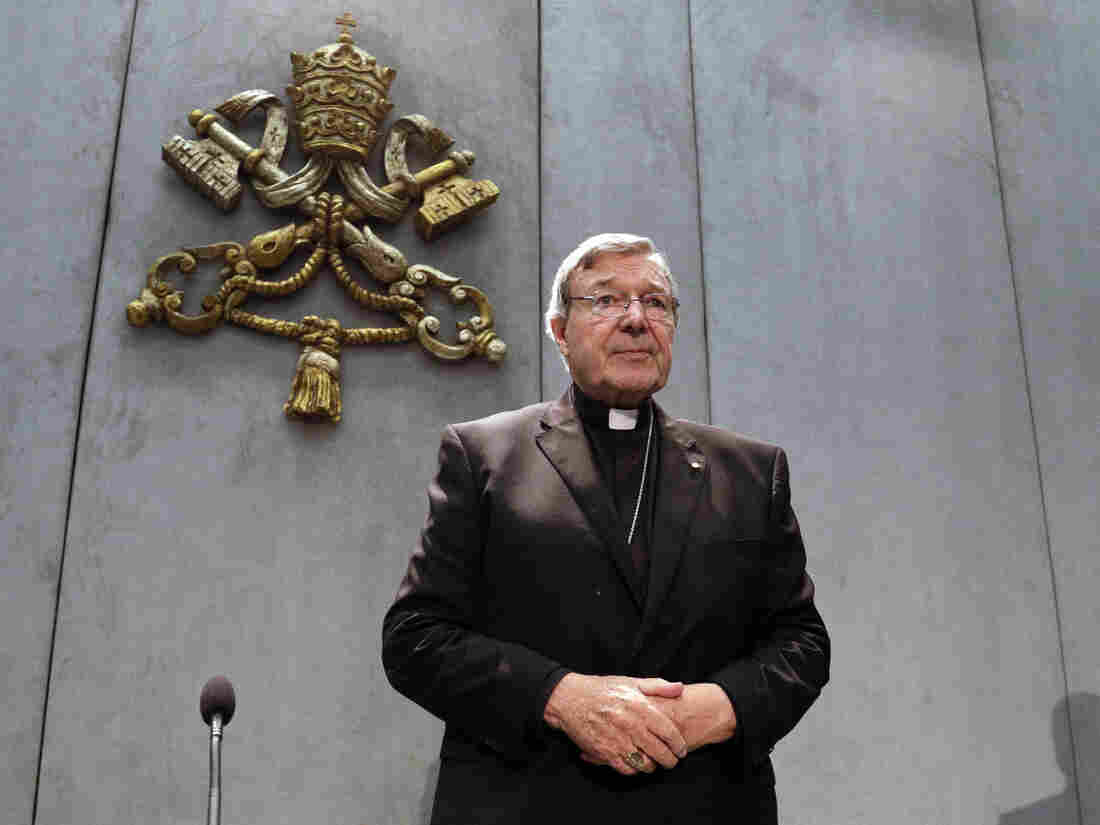 Police in the Australian state of Victoria have announced sexual abuse charges against Cardinal George Pell, the pope’s finance chief. At the Vatican on Thursday, Pell said he would return to Australia to fight the charges. Gregorio Borgia/AP hide caption

Police in the Australian state of Victoria have announced sexual abuse charges against Cardinal George Pell, the pope’s finance chief. At the Vatican on Thursday, Pell said he would return to Australia to fight the charges.

Police in the Australian state of Victoria have announced charges of sexual abuse against one of the Vatican’s most powerful cardinals.

Cardinal George Pell said he was “innocent of the charges” and would be taking a leave of absence from the Vatican to clear his name in Australia, where he was a priest in the 1970s and ’80s.

“I am looking forward finally to having my day in court,” Pell said to reporters. “The whole idea of sexual abuse is abhorrent to me.”

He is the highest-level Vatican official to ever be charged in the church’s long-standing sexual abuse scandal, according to The Associated Press. In 2014, Francis named Pell prefect of the Secretariat of the Economy, a wide-ranging role intended to get the Vatican’s finances under control. The pope also installed Pell on his Council of Cardinals, a nine-member group that is supposed to provide direction for overhauling the church globally, The Wall Street Journal reports.

Pell said he faced “relentless character assassination,” and said he had spoken with Pope Francis about taking leave to return to Australia. “Court proceedings now offer me an opportunity to clear my name and then return here back to Rome to work.” Police said he is summoned to appear at the Melbourne Magistrates Court on July 18.

Vatican spokesman Greg Burke spoke after Pell at Thursday’s press conference. “The Holy See has learned with regret the news of charges filed against Cardinal George Pell for decades-old actions that have been attributed to him,” he said, according to the Australian Broadcasting Corporation. “The Holy See expresses its respect for the Australian justice system, which will have to decide the merits of the questions raised. At the same time, it is important to recall that Cardinal Pell has openly and repeatedly condemned as immoral and intolerable the acts of abuse committed against minors.”

A major investigation by the Australian government released in February found that seven percent of Catholic priests in the country between 1950 and 2010 sexually abused children.

An Australian representative of the advocacy group Survivors Network of those Abused by Priests called the charging of Pell “probably the most significant action to be taken on behalf of survivors of clergy sexual abuse ever.”

“The Victoria and Melbourne law enforcement and investigative officers have shown the care, compassion, and allegiance to truth and duty that NONE of the ranking members and leaders of the Catholic Church has ever done,” SNAP Australia coordinator Steven Spaner said in a statement. “It is no small factor that the indictment of the reportedly third ranking Vatican official brings the issue of Church responsibility and Church inaction to the Pope’s doorstep, indeed, to his inner most sacred and canonical chambers. In short, the Pope’s hand has been called.”

Pell was born in 1941 in Ballarat, “a deeply Catholic city” in Victoria, the AP reports. He became a priest in the Ballarat diocese in 1966, and went on to be appointed archbishop of Melbourne in 1996 and then Sydney in 2001.

Ballarat is now at the center of Australia’s clergy abuse crisis: the city has been “devastated by disclosures of a huge number of church abuse victims, scores of whom killed themselves in an unprecedented cluster of abuse-related suicides,” according to the AP. At least 45 victims of child sexual abuse at the hands of clergy in Ballarat have killed themselves, an attorney representing victims told The Guardian.

Pope Francis formed a commission in 2014 to address clerical sex abuse, but it has been riddled with controversy, according to the Journal: “One of the two sex-abuse survivors on the panel was forced to take a leave of absence last year after criticizing Pope Francis’ record on sex abuse, and the other survivor resigned this year in protest over Vatican inaction on the problem.”

The charges against Pell threaten to cast a shadow on Francis’ papacy. The pope has frequently called for welcome and mercy, but as the The New York Times reports, “The pope also angered advocates of sex abuse victims in February when, in keeping with his vision for a more merciful church, he reduced sanctions against some priests convicted of pedophilia.”

After Victoria’s police commissioner announced last year that Pell was under investigation, Francis told reporters that “one cannot judge before the justice system,” the Guardian reported.

“Justice has to take its course and justice by the media or justice by rumor does not help. After the justice system speaks, I will speak.”