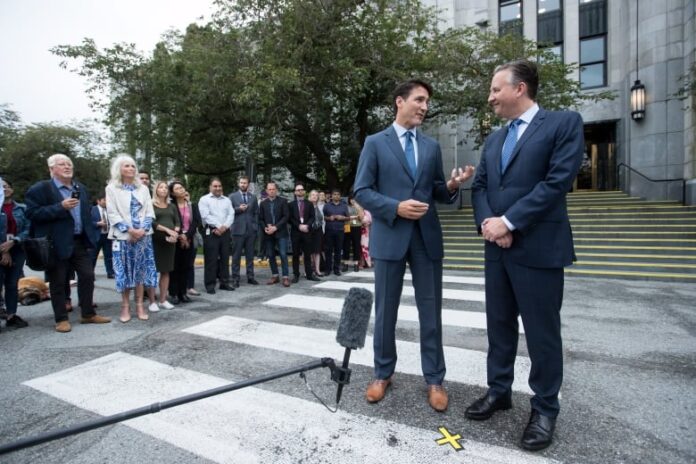 Kennedy Stewart is aiming for a Health Canada exemption from federal drug laws so diacetylmorphine, a safe substitute opioid, could be distributed through a non-profit organization to prevent overdose deaths from potentially dangerous drugs laced with fentanyl.

“We have thousands of addicts in this city and I think the scale of the problem just isn’t understood,” he said in a recent interview.

Stewart said he has had informal talks with three of the four major party leaders: Liberal Leader Justin Trudeau, the NDP’s Jagmeet Singh, and Green Leader Elizabeth May. He has tried to set up a meeting with Conservative Leader Andrew Scheer.

Insite, a Vancouver facility where people shoot up their own substances under medical supervision, opened in 2003 with an exemption from drug laws by the Liberal government after intense lobbying by health officials, drug users, and local and provincial politicians.

The Conservative government led by Stephen Harper vigorously opposed the site, saying it fostered addiction. The Tories fought to shut it down before losing a Supreme Court of Canada battle in 2011.

Since then, eight more supervised injection sites have opened in British Columbia. Alberta now has eight sites, Ontario is home to 22 and Quebec has opened four of them, all in Montreal, says Health Canada, which is considering four more applications from Ontario, two from Alberta and one each from Saskatchewan and Manitoba.

“It is tragic that we have failed these Canadians to the point where drug injection sites are often the only focus of discussion instead of a comprehensive approach to addiction,” Schow said in a statement.

“Drugs such as heroin, crack cocaine, and meth are extremely dangerous substances that tear families apart and have lasting effects on individuals who choose to consume them.”

Singh said on the second day of the election campaign that people struggling with addiction should get health care for a chronic condition and not be criminalized if their drugs are for personal use.

“Thousands of Canadians are dying and we’ve got to do things differently,” he said during a stop in Brampton, Ont., adding that mental health issues must also be treated.

“We can’t continue down the same path. If we want to change the results we’ve got to change our approach.”

May also stressed the need to address the opioid crisis as a health-care issue and called for the declaration of a national health emergency.

“Drug possession should be decriminalized, ensuring people have access to a screened supply and the medical support they need to combat their addiction,” she said in a statement.

Trudeau has said no to decriminalizing the possession of small amounts of drugs for personal use.

‘This is exactly what we need’

Data from the BC Coroners Service show that between 2016 and June 2019, over a quarter of the 4,559 overdose deaths in British Columbia occurred in Vancouver, the city hit hardest in Canada by the opioid epidemic. Statistics by the Public Health Agency in June showed 11,577 people died across the country from opioid-related overdoses between June 2016 and December 2018.

Stewart said providing a safer supply of drugs to people who are struggling with addiction is an innovative and practical response to the overdose crisis.

He said he isn’t pursuing decriminalization as an option because it’s a toxic drug supply that’s killing people.

“I don’t need that kind of massive policy change to reduce overdoses here in the city. What I need is a federal health exemption. That’s it,” he said.

“(Trudeau) has previously used that exact argument for creating a regulatory framework for cannabis in Canada and this is exactly what we need to do for other substances.”

Decriminalization is also important in reducing stigma against drug users so they don’t fear getting help for their addiction and should include education, social supports and treatment through the health-care system, which has made Portugal’s decriminalization model a success, Ahamad said.

“In Canada we have a system right now where the vast majority of addiction care is being provided by unskilled and sometimes lay people. It’s not regulated,” he said.

“It’s an election issue because currently we are hemorrhaging money into the downstream consequences of bad drug policy and prohibition. Overdoses and overdose deaths and all of the money that we’re pouring into all of that right now is really a direct cause of bad drug policy.”

Donald MacPherson, director of the Canadian Drug Policy Coalition at B.C.’s Simon Fraser University, said the overdose death toll demands a quick response through a safe supply of drugs that could be distributed through pharmacies, community health clinics and overdose prevention sites.

“It’s great that Conservatives advocate for expanding treatment. So do all the other parties and so do people who advocate for safe supply. You just need it all at this point,” said MacPherson, who worked as the first municipal drug policy co-ordinator in North America when he held the post in Vancouver between 2000 and 2009.

Regulating illegal drugs would take years if a government was willing bring in legislation but providing safer drugs is critical during the overdose crisis, he said.