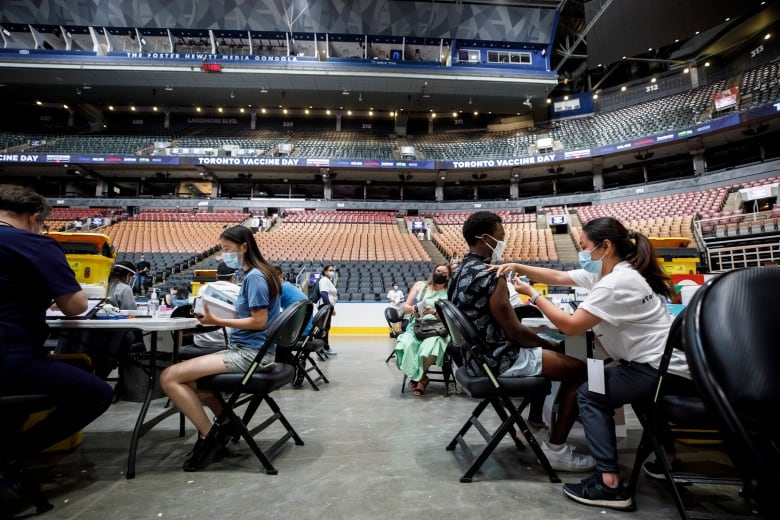 As a steadily rising number of fully vaccinated Canadians emerge from hiding to test the gradual return to pre-pandemic normalcy, a conundrum looms: what to do about those who, for whatever reason, haven’t had a shot?

Striking the proper balance between public health and personal freedom, and figuring out whether one must be relinquished to protect the other, will become increasingly key as the country reopens.

For a growing number of jurisdictions and institutions, the solution is a vaccine passport, a document the bearer can show as proof of immunization against the coronavirus in order to be granted certain freedoms. On the flip side, those who can’t produce such evidence because they couldn’t or wouldn’t get vaccinated could be denied access to businesses, flights and university dorms, to name just a few potential inconveniences.

Last month, Manitoba announced it would provide immunization cards to residents who have been fully vaccinated, allowing them to travel domestically without being required to self-isolate when they return. In May, Western University in London announced it would require students living in residence to show proof of immunization.

Also in May, Health Minister Patty Hajdu told CBC News that her government was talking with its G7 allies about implementing a vaccine passport that would allow immunized Canadians to resume international travel while Quebec began issuing downloadable QR codes as digital proof of vaccination, though it wasn’t immediately clear how they’d be used.

Ethicists, privacy advocates and civil liberties groups have warned that such requirements threaten to create a new two-tier society, benefiting those who have been vaccinated and ostracizing those who haven’t.

As of June 25, the latest update available from the federal government, three-quarters of Canadians 12 and over had received at least one dose of a COVID-19 vaccine, and 22 per cent were fully vaccinated.

A question of fairness

For Arthur Schafer, founding director of the Centre for Professional and Applied Ethics at the University of Manitoba in Winnipeg, vaccine passports or “immunity certificates” are inevitable, but, he says, the federal government “badly dropped the ball” by failing to provide clear guidance to provinces and public health officials about how to manage them.

“If we’re urging people to be vaccinated and we’re promising them that the vaccines are safe and effective, it just makes no sense then to say, ‘You’ll have to obey the same regulations as those who haven’t been vaccinated.'”

We’re becoming a hodge-podge society. We’d be much better off if we thought this through and created a policy that protected fundamental values​​​​.– Arthur Schafer, University of Manitoba

Instead, Schafer points out, it will happen in some jurisdictions, but not in others. In the latter, private entities such as cinemas and hotels could be left to devise their own policies.

“We’re becoming a hodge-podge society,” he said. “We’d be much better off if we thought this through and created a policy that protected fundamental values — privacy, confidentiality, liberty and public health — and balanced those in a way that was open, transparent and rationally defensible, and we haven’t done that.”

The debate about the use of COVID-19 vaccine passports is heating up as more people get vaccinated. Some say they can be incentives for people to get a shot and allow more normal activities to resume, but others worry about infringing on people’s freedom and privacy. 7:47

Schafer says a fair system will ensure reasonable accommodation for those who haven’t been immunized, and he points out those people aren’t all Facebook-fuelled anti-vaxxers. Some can’t be vaccinated because they’re taking immunosuppressant drugs, for example, while others have legitimate concerns about the safety and efficacy of the COVID-19 vaccines or justifiable fears borne from previous negative interactions with the health-care system.

“We should try to accommodate people who have objections, conscientious or scientific or even religious, where we can do so without compromising public safety and without incurring a disproportionate cost to society,” he said.

If such accommodation isn’t made, Schafer predicts, there could be a backlash.

“If an alternative route is available, if it’s effective and if the employer or the service provider doesn’t make it available, then I think a challenge under human rights legislation would succeed,” he said.

In May, Canada’s federal, provincial and territorial privacy commissioners issued a joint statement warning that while vaccine passports “may offer substantial public benefit, it is an encroachment on civil liberties that should be taken only after careful consideration.”

According to Ontario’s former privacy commissioner, Ann Cavoukian, now executive director of the Global Privacy and Security by Design Centre, Canadians shouldn’t be expected to surrender their personal privacy for the sake of public health.

“You don’t throw out privacy because there’s a health-related concern now,” Cavoukian said. “It can never be one versus the other.”

Cavoukian is concerned about what could happen to people’s private health data under a vaccine passport system, and she worries that once it’s surrendered, it will already be too late.

“This data will be retained in association with your geolocation all around the world,” she said. “If you’re travelling, going to a football game or whatever, this information will be tracked, and the potential for surveillance is enormous.”

In many countries, immunization cards have long been commonplace for access to certain health services, but they’re only now being required to travel between countries or enter restaurants, for example.

Like Schafer, Cavoukian is also concerned such a system will alienate a minority of Canadians, many of whom have sound reasons not to get immunized — reasons they shouldn’t be required to divulge.

At least one province agrees: On Wednesday, Saskatchewan announced it would not require proof of vaccination from residents looking to return to work or attend events, with one official pointing out that doing so would be a clear violation of the province’s Health Information Protection Act.

Cavoukian says people will relax once the majority of eligible Canadians is fully vaccinated. When that happens, singling out those who aren’t won’t seem nearly as important.

“There’s so much fear right now, and fear pushes people in the direction of, well, I guess we’ve gotta do this, and not examining it carefully.”

A question of freedom

Cara Zwibel, director of the Canadian Civil Liberties Association’s fundamental freedoms program, says it all comes down to choice.

The idea that you should have to show your proof of vaccination everywhere you go, I think that it fundamentally changes the kind of society that we are.– Cara Zwibel, Canadian Civil Liberties Association

“The idea that you should have to show your proof of vaccination everywhere you go, I think that it fundamentally changes the kind of society that we are.”

But what about the person sitting next to you at work, school or on the bus? Don’t they have a right to exist in a safe environment?

“I think we need to get away from this idea that we need a space where there’s no COVID,” Zwibel said. “It really should be about mitigating that risk as much as we can and avoiding a situation where our hospitals are overwhelmed, but unfortunately, I think COVID is just another risk now that we have to incorporate into our daily lives.”

Starting in early July, a new feature on the ArriveCan app will allow travellers to take a photo of or upload a snapshot of their vaccine documentation into the app before going through customs. 4:57

Like Cavoukian, Zwibel has serious concerns about sharing private health information, and she points out that while we might willingly hand our immunization records over to certain institutions, they’re statutorily limited in what they can do with that information.

“If we start to think about disclosing your vaccination status to the maître d’ at the restaurant and the person who takes your tickets at the cinema and the person who is checking at the door at the grocery store, that’s a whole other level of really surveillance of the population, and it’s significant,” she said. “I think before we go down that road, we have to think about what it is we’re trying to accomplish by doing this.”